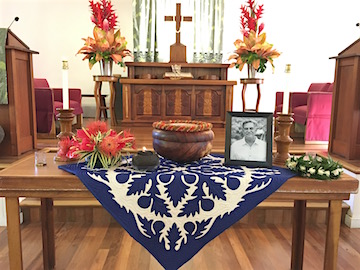 Although Uncle Joe died in March, a decision was made to allow family members and friends from across the country and on Oʻahu and Hawaiʻi island time to set their work and travel plans in place.

It was another a long day here in Mākena. As I left the office late in the afternoon, I knew I would be facing another evening in preparation for our time of worship.

I was intent on just picking her up and heading home to Wailuku. There was still a sermon to prepare.

But after sitting down to catch my breath, I said, “The title of my sermon for tomorrow is ‘Resting’ and right now I am not quite sure what I am going to say.” Ellen replied, “Well, maybe you need to rest right now.”

Taka added that he had already prepared a simple dinner. I was instructed to take a nap, have dinner with them and then head home to Wailuku - and so I did.

As we stood in their driveway to say aloha to each other, Taka thought I might find some inspiration on the way home. As I drove away and turned a corner, I noticed the change in daylight over West Maui. The sun was moving towards the horizon just south of the pali. The air was clear and cool because of the trade winds and I felt “rested.”

I decided by the end of the evening that the title of the message I wanted to share with you this morning was not going to be “Resting” but about “The Inward Struggle.” It is a struggle that we all experience in our lives.

Over fifty years have gone by but I still remember that day. A few of us were seated in a breezeway in middle school. We were on the cusp of turning into teenagers.

I never thought of myself as a bully. If you can believe it, I was all of 105 pounds at the time.

I knew that bullying was not always about physically intimidating another person. Sometimes it was in the ways we perceived others and the ways in which our conversations were often laced with hurtful and sometimes hateful words.

We thought of it as a game. Others played it. From time to time we played it too.

We named the game after her. Her last name became the adjective for what we called “the germ.” Everyone knew that if by chance you brushed up against her or had any physical contact with her then you were the immediate recipient of “the germ” and it was contagious.

One might suppose that the infected person was doomed to social isolation. But the remedy, the cure was always close at hand. It became a game of tag. It was understood that by touching another person, the infection would be transferred to that person so one was essentially “cured” of “the germ.” Playing tag was always a way to exert and expend youthful energy but “the germ” came at the expense of another human being.

We were sitting around talking about the game and laughing. But our words were ugly. We knew better but we managed to goad one another and the more we did that the more raucous our conversation became.

All of sudden everyone quieted down and I found myself still talking at full volume and it almost seemed like I was shouting. I realized in that moment that she was standing behind me. She heard everything we said about her physical appearance – her hair, her lips, her face, her body, the way she dressed – and how we had all concluded that she was indeed “the germ.”

I turned around and then it happened. She walked up to me. Without saying a word, she stopped and raised her right hand with an open palm. I was certain I was about to be slapped across my face.

She didn’t look angry. There was no malice in her eyes. She reached out and touched my face and then she walked away.

No one said anything. No one ran off. In fact, I felt a profound sense of regret because I knew how cruel it was that what I had done to her was what I had hoped would never be done to me.

She and I never spoke about what happened that day. After high school, we lost touched with each other and with each passing year I realize it is doubtful that we will ever see each other again.

“I do not understand my own actions. For I do not do what I want but I do the very thing I hate.” (Romans 7:15) (Preaching Through the Christian year A, Craddock, Hayes, Holladay & Tucker, Trinity Press International, Harrisburg, Pennsylvania, 1992, page 353) Those words come to us from the Apostle Paul in his letter to the early church in Rome. The inward struggle between good and evil is at the heart of our reading.

It is difficult to know if Paul’s words were autobiographical; that he was speaking of his own moral struggle or if he was attempting to point to the struggle before becoming a Christian or while living as a Christian. What seems evident in our reading is Paul envisions the inward struggle as “a present reality, as something ongoing.” (Op. cit.) It is a struggle we all know very well.

One might conclude that Paul’s words come from someone engrossed with too much negative thinking about the human condition; that you and I and all of humanity are flawed beyond redemption. But it is important to recognize that Paul is defending “the law”, in this case “the law of Moses.”

He makes “a distinction between sin as an overarching, cosmic principle, and the law(of Moses) as the articulated commandment of God.” (Op. cit.) Paul was a devout Pharisee and so he defends God’s revelation of “the law”, the set of principles meant to govern human life. It may be that when the early American missionaries spoke to our kūpuna or Hawaiian ancestors about “the law of Moses” that they may have already had an inkling of what that was having lived under the kapu system or laws that governed their own daily lives.

However, unlike the kapu system that was challenged by Kaʻahumanu and other Hawaiian women as being repressive and unjust, Paul insisted that God’s law was not deficient. Instead, the source of the struggle was in a force that he described as sin. It was, as one theologian asserts, a force within “the self that distorts our best intentions and keeps the law (of God) from achieving its desired purpose.” (Op. cit.)

That may be a conclusion that is all well and good for some. But I have always wondered how quick we are to absolve ourselves from any wrongdoing by referencing the word of the great theologian and late comedian and actor Flip Wilson whose character Geraldine was often wont to say of her mishaps and misbehaviors, “The devil made me do it.”

There are any number of politicians and preachers who seem to find resonance in Wilson’s words. Unfortunately, we cannot explain away our actions by attributing our shortcomings without an honest assessment and understanding of ourselves as human beings. The responsibility for our actions lay within our hearts or as Paul puts it for himself - “in my inmost self.” (Romans 7:22)

The conflict between willing and doing was not new to Paul or the ancients. It is said that the Roman poet Ovid, a contemporary of Paul, wrote: “Desire persuades me one way, reason another. I see the better and approve it, but I follow the worse.” (Metamorphoses, 7:19-20)

Now you may be wondering if I have found any comfort in Paul’s insight in light of a childhood game of tag. It is difficult for most of us to find any comfort in chastising ourselves for being as wretched as we are. After all, Paul raises the question that we ought to ask of ourselves, “Wretched human beings that we are, who will rescue us from this body of death?”

For Paul, the inward struggle is more than a human struggle. For Paul, it is a struggle between the cosmic powers being carried on within ourselves – the “law of God” pitted against “the law of sin” (Romans 7:22-23; Galatians 5:17; James 4:1, 5; 1 Peter 2:11) (Ibid., page 354) That is the hukihuki. That is the pulling – the back and forth - that we feel sometimes or perhaps often in being unable to do what is right.

The inward struggle can grow into a heavy burden. It can become an exhausting experience. It is one that Jesus understood.

“Come to me,” he said, “all who are weary and are carrying heavy burdens, and I will give you rest. Take my yoke upon you, and learn from me; for I am gentle and humble in heart, and you will find rest for your souls. For my yoke is easy and my burden is light.” (Matthew 11:28-30)

Her name was Colleen. I have often thought about whether or not I would have the courage to ask her for her forgiveness if we to ever meet again.

I know now in my inmost being that I what I did was wrong. The devil did not make me do it. I did it.

I know now I learned something from her that day– that she was gentle and humble in heart – and for that I can say, “Thanks be to God, through Jesus Christ our Lord! Amen.