"Out of regard for his oath"

They came by for a visit yesterday with their two sons, ages 12 and 10. They were married here 20 years ago in the summer of 1998. 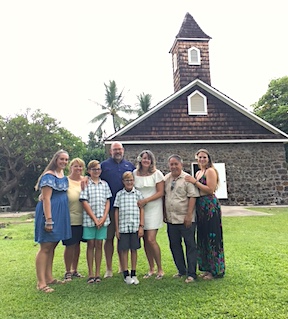 Mahomet, Illinois is a long way from Mākena, Maui. They began planning their trip last November around a conference that dad was to attend at Hapuna on the island of Hawai‘i. While there they had an opportunity to take a helicopter flight to see the eruption in Puna and they were able to “zip-line” along the Hamakua Coast.

It was a joy to see them again and to meet their sons for the first time. That good news came amid a week of other news that has been difficult for me.

Our prayers this week included the news that the Rev. Susumu Yamane died on Monday, July 9, 2018. I shared with you a few weeks ago that Sensei was my mentor and the reason I made the decision to enter the Christian ministry. I had a chance to visit with him a little over a month ago while he was under hospice care at the Palolo Chinese Home, an adult residential care home on the island of O’ahu.

Not long after receiving the news of Sensei’s death, we received word that Janis Elliott of Carmel, California died on the same day. Janis and her late husband were an active and vital part of our church family whenever they were on island.

So amid the sorrow and loss of Sensei Yamane and Janis’ deaths, there was the joy and celebration of a young family who have become a part of our lives through the church. At some point during our visit yesterday, our conversation turned to the state of the country and the world.

Mom was quick to say, “It has been good to be here. We have been out of touch as far as the daily news goes. We haven’t been watching or listening to anything.” Both mom and dad said they asked their sons to put their cell phones away and to look up and out to see what is here.

It reminded me of a conversation I had with someone not so long ago who said, “Just turn it off; turn off the television. Sometimes, taking a break from the daily news is the best thing we can do for ourselves.”

It occurred to me at that point that I may have been tracking too much of the news lately – on my cell phone, laptop, and television and in the newspaper every day. That’s when I decided to forgo all of the political drama in our country and around the world and read the Bible, specifically our reading this morning from The Gospel According to Mark.

What a surprise! It was shocking to be reminded that the Bible is filled with its own political drama and intrigue – drama that seems to parallel the times in which we live. The account of the beheading of John the Baptist, though gruesome, would make good copy for the evening news, regardless of the cable news network anyone watches.

Why did the writer place the story of John’s death between Jesus sending out the twelve disciples (Mark 6:7-13) and their return (Mark 6:30). If we were the journalists seeking to make some sense out of Mark’s intention, we would discover that both John and Jesus were active in their ministries during the time Herod Antipas who was the ruler of Galilee from 4 BCE to 39 CE.

Biblical scholars remind us that the Herod family left bloody footprints. Herod the Great tried to kill the infant Jesus (Matthew 2:1-20); his son Archelaus posed a threat to the holy family (Matthew 2:22); another son, Herod Antipas who appears in our reading this morning, killed John the Baptist; a grandson, Herod Agrippa I killed the apostle James and arrested Simon Peter (Acts 12:1-4); and a great-grandson, Herod Agrippa II, heard the Apostle Paul’s defense of himself in Caesarea (Acts: 25:13-26:32).

While on his way to Rome and as a guest of his half-brother Philip, Herod Antipas began his affair with Herodias, who was married to Philip at the time. He divorced his wife and soon after married Herodias.

It was John who told Herod Antipas that it was not lawful for him to marry his brother’s wife. It was that statement that drew Herod Antipas’ anger. But he was helpless to do anything to John because recognized John “as a righteous and holy man” and because of his own fear. (Mark 20).

In the end John died “a violent death, the direct consequence of the way he lived, and a ruler who has the power to save [but who instead] is moved by guilt, self-interest, and pride [rather] than justice and truth” (Feasting on the Word, Year B, Volume 3, Bartlett & Taylor, Westminster/John Know Press, Louisville, Kentucky, 2009, page 237). Douglas John Hall, Emeritus Professor of Christian Theology at McGill University in Montreal, Quebec makes the following observation:

Hall adds that it is “more than a story within the story, this potpourri of sexual lust, seduction, political ambition, scandal, and murder . . . ” It is a story about how the sword of political power, whether in the hands of a waffling Herod Antipas (Mark 6:20, 26) or the vacillating Pilate (Mar, 15:6-15) will strike down God’s prophets. It is a story that followers of Jesus then and now would do well to remember (Preaching Through the Christian Year B, Craddock, Hayes, Holladay& Tucker, Trinity Press International, Harrisburg, Pennsylvania, 1993, page 344).

John’s story comes between the account of the twelve disciples being sent to preach repentance, cast out demons and heal the sick (Mark 6:7-13) and their return to Jesus at the feeding of the five thousand through the blessing of the five loaves of bread and two fish (Mark 6:30-44). They were commissioned and empowered as we are commissioned and empowered to do the same.

What we often neglect to recognize or acknowledge is that by doing the same, we may well be putting ourselves in harm’s way. So it would seem that there is not much good news for us in the story of the death of John the Baptist.

Moffett Churn, a Presbyterian minister in North Carolina, points out that the story is about us. ‘In an all-points bulletin to disciples, then and now,” she writes, “just in case we’re getting full of ourselves and thinking that following Jesus is going to bring us glory and advantage and ever-increasing success, Mark says: Think again” (Christian Century, June 20, 2018, page 21).

John’s life may have been spared were it not for “Herod’s insatiable quest for preeminence – having it, keeping it, flaunting it. Not sexual lust but lust for power is the problem this text illuminates” – then and now (Feasting on the Word, Year B, Volume 3, Bartlett & Taylor, Westminster/John Know Press, Louisville, Kentucky, 2009, page 240).

Why was Herod Antipas so quick to grant the daughter of Herodias her request for the head of John the Baptist? The Biblical text tells us that he did so “out of regard for his oaths and for the guests, he did not” [could not] . . . “refuse her” (Mark 6:20).

In other words, there was no way for him to back off. He had already declared publically, “Ask me for whatever you wish and I will give it. Whatever you ask me, I will give to you.”

It seems we live in a world full of Herods today. Presidents and Prime Ministers, Kings and Sultans, dictators and despots are all tempted by self-interest and pride to having, keeping and flaunting their power at the expense of truth and justice.

Jesus and John preached repentance, cast out demons and healed the sick. In doing so, they spoke truth to power and it cost them their lives.

We are called to speak truth to power. We are called “to take up a life that, in one way or another, has a cross deeply embedded in it” (Christian Century, June 20, 2018, page 21).