Pam, Annetta and Thom. were the first to arrive. They came with arms laden with grapes, strawberries, pineapples, cheese and crackers and a haupia cake. Not long afterwards others arrived to help with setting up the refreshments for the 17th Annual Maui Classical Guitar Concert that was held here last Wednesday evening. 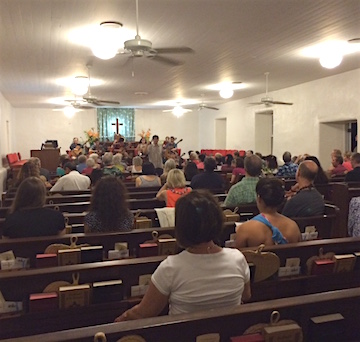 Cameron served the haupia cake. Elizabeth, Auntie Laurie and Kathy had already helped Pam and Annetta place the refreshments on the table under our pavilion.

At around 8:00 p.m., we became quickly surrounded by those making their way across the church yard. After about twenty minutes of folks visiting with each other and enjoying what was provided, the pavilion lights flickered and the church bell was rung to signal the start of the second half of the concert.

Now it was time to do the clean-up. Tablecloths were removed. Trays and platters were returned to the kitchen. Tables and chairs were stored back in the classroom and office building.

There were pitchers, utensils and trays to be washed and dried. Annetta made the decision to start the clean-up a bit earlier so by the time I saw Auntie Laurie standing over the sink to wash the pitchers that were used for the juice, half of the work had already been done.

Those attending the concert expressed their appreciation for the hospitality that was offered. We acknowledged each compliment with a smile and a - “You’re welcome.”

With everyone’s help we were able to be pau with the clean-up fairly quickly. There was time enough for us to sit down to enjoy the remaining moments of the concert and to hear Ian O’Sullivan’s – by the way, that is a good Irish-Hawaiian name - to hear his orchestral arrangement of Dennis Kamakahi’s song “Kokeʻe” with 16 guitars and 1 ‘ukulele.

I was reminded of the value of working and listening as Ian led the orchestra in its exuberant interpretation of “Kokeʻe.” As the orchestra played I could hear the faint voices of those around me singing this wonderful love song for the island of Kauaʻi:

While we had spent the early evening being busy with the preparations to welcome our guests with refreshments, there was time now to sit and to listen. It was a reminder to me that the lesson of the story of Jesus’ visit to the home of Martha and Mary is about working and listening; listening and working.

It has been said that “practically everyone who reads or hears the story of Jesus as (a) dinner guest in the home of Martha and Mary is drawn to the simplicity, the personal interest, the realism and the ease of identification with one of the sisters.” (Preaching Through the Christian Year C, Craddock, Hayes, Holladay & Tucker, Trinity Press International, Harrisburg, Pennsylvania, 1994, page 345) As such it would seem that the mere telling of the story would be enough.

Of the accounts of Jesus’ life recorded by Matthew, Mark, John and Luke, only Luke tells this story. But John does include an account of Martha and Mary when he locates their home with Lazarus in Bethany (John 11:1; 12:1-3).

Following the death of Lazarus and at the dinner for Jesus in their home, their behavior was not unlike that which is described by Luke: Martha as the one who went out to meet Jesus while Mary sat in the house (John 11:20). At dinner, Martha served and Mary anointed the feet of Jesus (John 12:10-3). In our reading this morning, Martha is distracted with “many tasks” and Mary sits at the feet of Jesus, anxious to hear what he has to say. (Luke 10:39)

If that is the case, we could easily view Martha as “the model of the active and busy Christian worker” and “Mary as the model of the contemplative and reflective Christian.” (Op.cit.) But such a view is too simplistic.

After all this account follows immediately after the parable of the Good Samaritan and Jesus’ injunction to “Go and do likewise” in showing mercy to others. (Luke 10:37) In his encounter with Martha, Jesus seems to contradict himself.

“He affirms and blesses not going and doing but sitting still and listening.” (Op. cit.) Our inclination is to assume that we must choose between doing one or the other. But by placing the story of Martha and the parable of the Good Samaritan side by side, we are not asked to accept one and reject the other. Instead both the Martha and Mary are examples of how we are to live our lives in ways faithful as we work, as we listen.

Jesus did something remarkable that day when he went to the home of Martha and Mary. He broke through the social barriers of his time by being received as a guest in the home of the two women.

“Hospitality in the ancient Near East was tightly bound up in customs and practices which all were expected to observe.” (Harper’s Bible Dictionary, Paul J. Achtemeier, Harper & Row, Publishers, San Francisco, 1971, Page 408) Perhaps that may have been part of the burden that Martha felt with her many tasks.

But she knew well enough that hospitality was about “receiving” outsiders and changing those who may be strangers into guests. It was more than entertaining family and friends.

Aside from being received as a guest, Jesus also broke through the religious barriers of his time when Mary sat at his feet – listening. No doubt, it was something others noticed. After all rabbis did not allow women to “sit at their feet” and yet we see clearly that Mary is pictured as a disciple – a learner and a follower of Jesus.

Through Mary, we come to realize that we do not live by bread alone but by every word that proceeds from the mouth of the Lord. (Deuteronomy 8:3; Luke 4:4; John 6:27) Through Martha we realize someone has to bake the bread. The hospitality, the hoʻokipa of Martha and Mary was a part of the welcome that was offered to those who gathered here last Wednesday for the guitar concert.

As the evening came to a close, we were able sit and to listen to the closing lyrics of “Kokeʻe”: