Alice Walker’s The Color Purple was published in 1982. In the following year, she received the Pulitzer Prize in Fiction and the National Book Award. The novel became the inspiration for Steven Spielberg’s film, by the same name, in 1985. 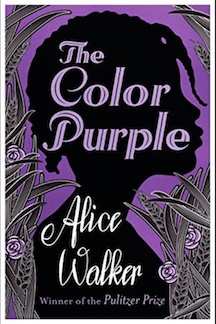 Despite the outcome of the film awards, the novel was adapted in 2005 for the stage, opening at New York City’s Broadway Theater in 2005. It went on to capture the Tony Award for best leading actress in a musical in 2007.

Critics of The Color Purple were alarmed by its graphic violence – physical, sexual, mental and emotional. Walker arranged the account of Celie’s life, the main character of the story, in what has been referred to as an “epistolary” or “letter writing” format with dozens of letters written over a period of 20 years.

Having grown up in poverty with an abusive father, Celie is married off at a young age to an angry and unkind man, who separates her from her only true friend in the world, her sister Nettie. She has every reason to give up on family, hope and love, but she has a spirit that shines through despite her hardships. (Paul Daigneault, Director of The Color Purple & Producing Artistic Director of the SpeakEasy Stage Company, Boston, Massachusetts, 2014).

If you have read either the novel, watched the film or seen the stage production you know that Celie’s experiences are traumatic and deeply disturbing. Yet, she was able to find her way in the world primarily through the strength of the other women who were a part of her life.

I recall a particular scene in the film that struck me. I tried tracking down the scene in the Walker’s written text but was not able to find it on the internet. Whether or not it is in the book, what I recall is a scene in which Celie is hurriedly walking along with either Nettie, her sister, or Shug, the mistress of her husband.

A white-washed church with a bell tower can be seen above them to their left. Voices can be heard singing a hymn and in the course of their conversation, Celie wonders what it would be like to go to that church.

Nettie, or it may have been Shug, is quick to say, in effect, “Well, good luck with that. God’s been trying to get in there for years.” And in that moment we are made aware of the racial divide, then and now, that is a historical fact in our life as a nation.

In a letter to Celie, Nettie writes: “ . . . have you ever found God in church? I never did. I just found a bunch of folks hoping for him to show up. Any God I ever felt in church I brought with me. And I think all the other folks did too. They come to church to share God, not find God.”

Whether Walker intended it or not, The Color Purple compels us to take a long hard look at the nature of God and religion. I would venture to say that when the Apostle Paul wrote his epistle or letter to the church at Ephesus, he sought to describe “the shocking nature of the church” (Feasting on the Word, Year B, Volume 3, Bartlett & Taylor, Westminster/John Knox Press, Louisville, Kentucky, 2009, page 255) by calling those in the early church to take a long hard look at God’s reconciling work in the world through Jesus Christ.

In his letter, it appears that the church forgot the “radical nature of their life together. Yet Paul does not sound impatient” (Op. cit.). By the time Paul wrote his letter, Gentiles and Jews had become full-fledged members of “the household of God” – the church (Ephesians 2:19).

In time, the matter was resolved though not without difficulty. Paul makes clear that the unity of Gentiles and Jews has been achieved “in Christ Jesus (Ephesians 2:13); that is, Christ has become the meeting place for [a} divided humanity” (Preaching Through the Christian Year B, Craddock, Hayes, Holladay & Tucker, Trinity International Press, Harrisburg, Pennsylvania, 1993, page 350)

Paul writes of Jesus: “He abolished the law with its commandments and ordinances, that he might create in himself one new humanity in place of the two, thus making peace, and might reconcile both groups to God in one body through the cross, thus putting to death that hostility through it” (Ephesians 2:15-16).

In retrospect, Paul reminds those in the church then and now that Christ Jesus is “our peace.” “He has broken down the dividing wall, that is, the hostility between us” (Ephesians 2:14). It would seem that that is lost on many in the church today.

The Rev. Karen Chakoian of First Presbyterian Church in Granville, Ohio observed almost ten years ago that “it seems as if the whole world is building walls. The United States is building barriers along its southern borders to keep illegal immigrants from entering. The Israelis continue to build a wall to separate themselves from the Palestinians. There is talk of erecting a barrier in the region between Pakistan and Afghanistan” (Feasting on the Word, Year B, Volume 3, Bartlett & Taylor, Westminster/John Knox Press, Louisville, Kentucky, 2009, page 256).

As Christians, we recognize that “peace has already been made, even though hostilities and bloodshed continue, in the same sense that death is no more, even though people continue to die” (Op. cit.) How we live our lives as peacemakers will become our witness to the world.

“Lest we lose hope,” Chakoian points out, “we would do well to remember the day the Berlin Wall came down. If [the] wall could fall, what else? The end of apartheid in South Africa brought even more hope and excitement. The divisions of black, white and colored were falling, and reconciliation became possible. Rather than building walls that separate us . . . [the] images [from Paul’s letter to the] Ephesians [urges] us to let ourselves be built into a temple where God can dwell” with Christ as the cornerstone (Ibid., page 258).

The dwelling place of God is not in the structure of a church or a temple. It is not in a building, but within each of us and as a gathered people. We are members of the household of God through the Holy Spirit

That is the one of the lessons for us in our reading from The Gospel According to Mark. Again, the household of God is not bound to a structure. Jesus sent the disciples out to teach and to heal (Mark 6:30). Upon their return they told Jesus what they had done and taught.

Today, politicians and some religious leaders in the U.S. may argue about the cost of education, supplemental nutrition assistance programs to feed the poor, disabled and elderly and health care for all and decide that it is more important to build a “wall” that may cost between $21 billion and $66 billion and to spend over $600 billion a year on national defense – more than the military budgets of China, Russia, Saudi Arabia, India, France, United Kingdom and Japan combined.

I would argue Jesus calls us today to a mission and ministry driven not by economics but by compassion. “ ... wherever [Jesus] went, into villages or cities or farms, they laid the sick in the marketplaces, and begged him that they might touch even the fringe of his cloak; and all who touched it were healed” (Mark 6:56). In Mark’s account, the tasks of the disciples were to teach and then to feed and to heal the people. So it is that we must also go out into villages or cities or farms to do the same - to teach, to feed and to heal.

We affirm the work of members of our church family including Brenda Albright who continues to serve on the Board of Directors of Hale Kau Kau at St. Theresa’s Roman Catholic Church in Kīhei; Auntie Edie Kapiko who is a volunteer at the Maui Food Bank; Kahu Danette Kong who serves as chaplain at Hospice Maui and Kahu Bob Nelson who serves as an on-call chaplain at the Maui Memorial Medical Center; and Cindee Burkitt at the Maui Humane Society. There are others doing the same – teaching, feeding, healing.

There is an excerpt from The Color Purple that, for me, serves as an unorthodox psalm of praise and thanksgiving. Let me apologize for one very colorful word that appears in the dialogue.

Shug: No, not vain; just wanting to share a good thing. I think it pisses God off when you walk by the color purple in a field and don’t notice it.

Celie: You saying it [God] just wanna be loved like it say in the Bible?

Shug: Yeah, Celie. Everything wanna be loved. Us sing and dance, and holla just wanting to be loved.

Look at them trees. Notice how trees do everything people do to get attention . . . except walk.”