"Weeds among the wheat"

I knew the family from many years ago. I received a call one day and was asked if I would come to offer a blessing at the bedside of a young man who was dying. I do not remember who called me, whether it was his sister or his partner. 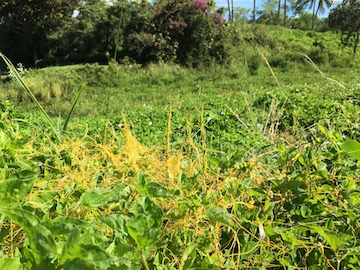 When I arrived at the house they were both there along with a host of other family members. There were parents and grandparents, brothers and sisters, aunties and uncles, and cousins. He was already bedridden.

I was introduced to him and we had a chance to speak for a few moments.

When it was time to offer the prayer, everyone was called into the room. Some sat on the bed, others knelt at the edges, others stood, some sat on nearby chairs, and others crawled up and lay by his side.

I offered a word of blessing and realized in that moment that the room was filled with the love of this big Hawaiian family and that in itself was a blessing. After he died, the family made arrangements to have the memorial service here at Keawala‘i.

As we prepared for the day, I learned that they were members of another church. I wondered why they decided not to have the service at their home church. I knew when we gathered at his bedside that afternoon to offer a blessing that he died from the AIDS virus.

His sister said, “The pastor at the church told us he would not do the service because my brother died of AIDS.”

I am not sure what prompted her pastor to make that decision. But it would seem that our reading from The Gospel According to Matthew this morning may shed some light on our propensity as human beings to judge others, to decide who is worthy of our attention, who is worthy of our prayers, who is worthy of our aloha. So often, we easily draw a circle around ourselves about who we will welcome into the church and who we decide does not belong.

From time to time I feel like I am repeating myself when I say the doors of this church are literally open - to all. I have said this before and perhaps you will hear me say this again. And if I am repeating myself, it is only because Jesus cautions us in “the parable of the weeds among the wheat” that we are not responsible for passing judgment over others in determining “who is in and who is out.”

The challenge we face is whether or not our hearts are also open. It is not our kuleana or responsibility to separate the weeds from the wheat. That is not to say that we ought not take each other into account when some may choose to be disruptive in the life of the church. But passing judgment over others can be problematic especially if we are not willing to look at ourselves.

In her own reflections on the parable, the Rev. Talitha Arnold of the United Church of Santa Fe, New Mexico wrote: “Known in biblical terms as ‘tares,’ the bearded darnel has no virtues. Its roots surround the roots of good plants, sucking up precious nutrients and scarce water, making it impossible to root it out without damaging the good crop. Above ground, darnel looks identical to wheat, until it bears seed. Those seeds can cause everything from hallucinations to death.” (Feasting on the Word, Year A, Volume 3, Bartlett & Taylor, Westminster/John Knox Press, Louisville, Kentucky, 2011, page 260)

I imagine many of us would like to think of ourselves as “the good seed.” There may be “bad seed” or “evildoers” among us but that is not who we are. We see ourselves as “children of the kingdom.” (Matthew 13:38)

In explaining the parable to the disciples, Jesus makes clear that “the field is the world.” (Matthew 13:38) But it is unclear whether the disciples were tempted to remove evil from the world or from within the church. It is remarkable then that the parable seems to presuppose a church situation in which the disciples are tempted to become involved in purging evil. (Preaching through the Christian Year A, Craddock, Hayes, Holladay & Tucker, Trinity Press International, Harrisburg, Pennsylvania, 1992, page 372) It was a temptation for the early church and it is a temptation for us today.

The parable teaches us that any attempt to “expunge evil”, that is to rid ourselves with those whom we perceive as evil, is premature. Our desire for purity and perfection will always run head on into the call of our faith in Jesus Christ to accept, forgive and restore.

Whenever we attempt to “expunge” anyone, whenever we find our churches embroiled in conflicts, any effort to shut others out is likely to result in an upheaval and the loss of faithful members. We know that. We have experienced that in the life of many of our churches.

So what are we to do? Ultimately, the task of judging between good and evil is not ours to make. That judgment belongs to Christ, not to us.

“The parable’s ending,” Pastor Arnold said, “affirms that there is One who is stronger and smarter than the weed-sowing enemy. God (in Jesus Christ) will sort out the good from the bad.”

She then offers a word of reassurance, “ ... that may sound harsh to our tolerant, enlightened ears, but this harvest time judgment is the ultimate good news . . . In a world where seeds of hatred and injustice are daily sown the parable affirms unequivocally that God is still in charge.” (Feasting on the Word, Year A, Volume 3, Bartlett & Taylor, Westminster/John Knox Press, Louisville, Kentucky, 2011, page 264)

I received an email earlier in the year from the sister of the young man who died of the AIDS virus. “Kahu, my son is getting married in July,” she said. “Our family and my son and his fiancé would like you to do the wedding.”

When I met with her son and his fiancé in preparation for their ceremony, I learned that they were already the parents of young a girl and so I ended up marrying all three of them. It was then that I remembered he was in the room the day we offered a blessing for his uncle.

It was good to see him again and to be with the members of his ‘ohana once more. He was still a boy when we were in the room that day to offer a blessing for his uncle. It was a day of deep sorrow.

Now we stood in the middle of a macadamia orchard in Waiheʻe celebrating his marriage. It was a day of great joy!


[ The photo illustrating today's sermon is a photo I took of a patch of kauna'oa attempting purchase in a thicket of ground plants and weeds, somewhere near a Makena golf course verge. Some consider it a weedy, parasitic plant; others treasure it as source material to make leis with. ~ L. Nebres, Kahu's amanuensis. ]