"The Love of Christ"

Kaimana became separated from his mom, Rocky, for several hours on Friday. The month-old Hawaiian monk seal somehow ended up in the dilapidated Natatorium not far from Kaimana Beach, the beach after which he was named.

Kaimana Beach itself is one of the busiest beaches on O‘ahu’s south shore adjacent to Waikiki Beach. It is not clear how Kaimana and his mother, Rocky, became separated but the cries of both mom and pup caught the attention of many beachgoers. 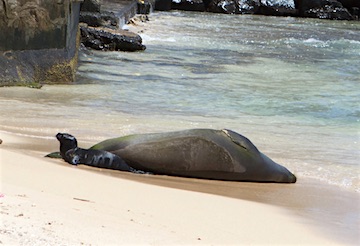 Calls were made to the Hawai‘i Animal Response program. Marine biologists and others from NOAA - the National Oceanic Atmospheric Administration - quickly responded. They were able to lift Kaimana out of the Natatorium pool and onto the back of a golf cart.

Video coverage of the rescue appeared on the Friday evening news showing NOAA personnel moving quickly to return Kaimana to the beach. Eventually, mom and pup were reunited to the relief of everyone.

The Hawaiian monk seal is one of the most endangered marine animals in the world today. There are about 1,400 in the wild now. Rocky’s nine previous pups were born on Kaua‘i. But whether the seals were born on the island of Kaua‘i or O‘ahu, each baby seal is a precious life.

Based on our reading from The Gospel According to Matthewthis morning, I wonder if Jesus might not have likened “the kingdom of heaven” to the rescue of Kaimana? Shortly after Kaimana was born on June 29th crowds gathered to see the newborn pup and mother.

Day after day, many came by to see them. Each visit became a moment of joy and delight.

But as the day came to an end on Friday, others were drawn to the area in a moment of distress. Help was sought as the cries of Kaimana and his mother reverberated off the walls of the surrounding hotels. Calls were made and everyone responded with care and compassion.

Biblical scholars tell us that the use of the word “‘heaven” was ”a pious way of avoiding use of the holy name (for God) and was not intended to point us “beyond here to the hereafter.” In other words, the “kingdom of heaven,” “the kingdom of God,” is near to us and not far off or far away. It is here and now, and not simply a place where we go to after we die. (Preaching Through the Christian Year A, Craddock, Hayes, Holladay & Tucker, Trinity Press International, Harrisburg, Pennsylvania, 1992, page 382)

I mentioned the name of the Rev. Talitha Arnold last week. She is the Senior Kahu at Santa Fe United Church of Christ in New Mexico.

In her reflections of Jesus’ teaching of the parables in our reading from Matthew this morning, she notes: “I wonder if the crowds” (who were following Jesus) were disappointed – perhaps some of the disciples too? Although he includes the story of a wealthy merchant, Jesus tells one more parable about seeds and plants, followed by stories of baking bread, plowing a field and fishing. (Feasting on the Word, Year A, Volume 3, Bartlett & Taylor, Westminster, John Knox Press, Louisville, Kentucky, 2011, page 284)

The parables are stories of ordinary, everyday occurrences – baking, planting, fishing. It hardly seemed like the kind of stories that would excite people. Pastor Arnold imagines that some in the crowd that day, perhaps even some of the disciples who were with Jesus, would have preferred stories of princes and kings or military generals and revolutionary leaders to please those like Simon the Zealot or Judas.

It may be that even some of us are disappointed as well. Baking bread, plowing a field, fishing and rescuing a baby seal hardly fits into an exalted vision of God’s realm where the power and might of men rule - and I mean men.

You have heard to me say before that when Jesus entered Jerusalem for the final time for the Feast of the Passover, many in the crowd that day were yearning for not for a suffering servant but for a warrior king. In teaching the disciples through parables, Jesus puts the focus not on himself but on his desire to help us understand why it is that we pray: “Thy kingdom come on earth as it is in heaven.”

The kingdom of heaven, Pastor Arnold, notes is not some “kingdom in the sweet by and by” but as close as a loaf of bread and a baby seal. The nearness of God’s kingdom challenges us to choose to be a part of the kingdom. (Ibid., page 288)

It is a challenge fraught with the reality of the world in which we live, a world that is often awash with selfishness and greed, despair and anger. For millions of people in many of the “kingdoms” of the world today, it would seem the nearness of God is an illusion.

It is a challenge echoed in the words of the apostle Paul as he sought to offer words of encouragement and hope to those in the early church in Rome. “Who will separate us from the love of Christ? Will hardship, or distress, or persecution, or famine, or nakedness, or peril, or sword?” (Romans 8:35) How easy it would be for us to succumb to selfishness, greed, despair and anger?

How easy it would be to give up and declare that “the kingdom of heaven” is no longer a dream but a nightmare. But then we see generosity and kindness, hope and peace blossom, again and again, in the ordinary moments of our daily lives and in those moments we are made aware once more of the transforming power of God’s love in Jesus Christ.

For a moment, Kaimana and Rocky became physically separated. One could argue that just as Jesus felt in a moment of time that God had forsaken him so it is that Kaimana may have felt the same and that we too may wonder from time to time if God has forsaken us.

But Paul reminds us: “ . . . in all things we are more than conquerors through him who loved us. For I am convinced that neither death, nor life, nor angels, nor rulers, nor things present, nor things to come, nor powers, nor height, nor depth, nor anything else in all creation, will be able to separate us from the love of God in Christ Jesus our Lord.” (Romans 8:37-39)

It is a love that will strengthen and sustain through all our days and for that we give thanks to God. Mahalo ke Akua. Amen.