“Maybe It's Not a Miracle After All”


When our family served as UCC missionaries in Japan we loved to have parties. We invited church and community groups over to our house as often as we could. Like any host, we were always concerned that we had enough food. It would be terrible to run out of food, right? 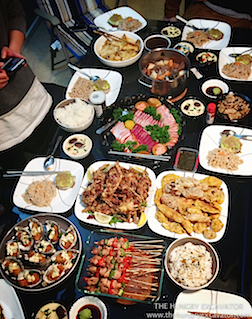 We quickly learned that it was different in Japan. No one asked if they could bring anything ahead of time. We were not bothered by that at all—we wanted to offer this gift of a nice dinner back to them and so even if they had asked, we would’ve told them “really, no need”.

So, no one asked and we planned a lot of food because we didn’t want to run out and then people would start coming…and the food would start pouring in. We NEVER had enough tables for all the wonderfully delicious food that had been added to our party. And, believe me, there was plenty left over.

I’m guessing this is not an experience that is unique to us, right?

And maybe this is why this is one of my favorites of Jesus’ stories. The reason I like it so much is that I think I get it.

Turning water into wine; instantly stopping someone who is bleeding; bringing someone back to life? Those are miracles for sure.

But feeding 5000 people with a few loaves of bread and fish? Now, that, I get—I get it because I see it often. And not just at parties.

I see the “Miracles” that faith communities perform all the time when they come together to do a seemingly impossible task—working together until the impossible becomes the possible. Adding all their gifts to the table—creating a bounty of resources that is more than enough to get the job done.

Another reason that this is my favorite story is because it is a story of stewardship of all that has been given to us—bring it together and use it to live the lives of discipleship.

• Jesus showed us the way; he showed us a life and experience that was all about grace and abundance. Jesus doesn’t simply feed the crowd, there are leftovers. Jesus is what theologian William Willimon says: “a sign and enactment of God’s providential abundant care for hungry people.” God doesn’t just give us what we need; God gives us more than we need.

• Jesus expects us to, after being fed, use what we have learned; use what has been given to us to go out where there is need; find those places of hurting; find those people and places that need healing and be agents of transformation.

I am guessing that I am not unlike many of you—when I hear Dr. Boesak talk about what scripture compels us to do I feel both convicted and excited—convicted about those things that I let get in the way of really being able to go about the work of Jesus’ realm on earth and excited—maybe a better word is renewed—to get going about that work.

From his visit this time one of the things that has been constantly on my mind is St. Augustine of Hippo’s story about Hope and her two daughters: anger and courage. Anger-sees the injustice done to another. Courage-goes about healing that brokenness.

Jesus didn’t decide to feed the 5000 because he was hungry and his mother always taught him never eat in front of others without offering them something to eat—although she probably did!

No, Jesus went about feeding the 5000 people because, as scripture says, he had compassion on them. They were hungry; they needed food. And he did it in such a way that there were leftovers—more than enough—abundance. Jesus is all about abundance.

Like Hope’s daughter Anger, Jesus sees the need in another and he goes out to meet that need.

And, like Hope’s other daughter, Courage, he beckons us to find the courage to do the same—find the need in another; find the brokenness in the world; find the injustice done to someone else—and go out and bring healing.

The news is full of examples of the places in this world where there is hurting—Gaza, Israel, Ukraine, Africa, California, Waikiki…. The question for us today is how can we find the Anger and the Courage to go about the work of bringing Hope.

William Willimon tells the story of a large church in the heart of one of the largest cities in the United States. It had once been a large, thriving downtown church but then over a couple of decades has shrunk to almost nothing. A new minister came to the church and during one of her first sermons, she talked about how impressed she was with all the children who walked past the church each afternoon after school and all of the children who also stopped to play in the church playground.

She then said, “Few of those children have parents at home in the afternoon. That means that most of them go home to an empty house or else hang out on the streets on their own, and you know what that can lead to.”

Then, she added, “I wonder if God is calling someone here, this morning to respond to this. I look out and I see experienced, wise people who, in their day, were masters at raising children. Is this your day to step up and raise someone else’s child?”

The next week, six of her members, among them one of the oldest people in the congregation, volunteered to begin an after school minsitr at the church. They were soon joined by a dozen others who provided recreation, homework tutoring, and refreshments for the children every afternoon from four until six.

Out of that ministry there has arisen a new church. That congregation is now thriving with an influx of families and people from the neighborhood.

They responded to Jesus call (through the words of their minister on a Sunday morning during a sermon) to show compassion; to find the need in their community and reach out. They took a loaf of bread and a few fish and then fed the multitude.

Sometimes we think a ministry has to be huge and word changing to be considered a ministry. When, actually, often we just need to see a need and respond.

I have one more story to share—a similar story about a world-changing; life changing moment. I realize that Dr. Boesak may have told you this story but when I was present in the room where he shared it with an ecumenical group gathered from Hawaii Island, I started to cry.

He told the story of how way back at the beginning of the anti-apartheid movement a law was passed that only family members could gather for a funeral—large crowds were not allowed. They threatened the authorities.

One day 19 people gathered for the funeral of someone who had died. I don’t remember the circumstances around his death but I’m guessing it had to do with violence. No matter what the reason, these 19 people were not allowed to come to the funeral—they were not family members.

The authorities came and those 19 people were arrested. They were all put into the same jail cell. Gathered there, someone pulled out some bread and a chocolate bar. They passed it around and each one took a piece and talked about what it meant to them.

Dr. Boesak said, “It was one of the most life transforming moments of my life.”

He kept repeating—only 19 people. It was only 19 people that grew into a movement that ended apartheid and changed the world.

He then went on to say, “Never despise the small beginnings when you do it for justice. Don’t give up. There were only 19 people where we began; look where we ended up.”  There was only one boy with some food—some fish and some bread—and look at the thousands and thousands that were fed—and all that was left over.

Jesus has put before us an example and we are called to follow. We can never say, “but it was a miracle and only Jesus; only God can do miracles.” The miracle was people seeing and responding to the needs of the community; to the brokenness in the world; to the opportunity to be part of changing people’s lives.

This morning we gather at the communion table—not with loaves and fish—but with bread and grape juice. Jesus has blessed the abundance that we are to receive and now is calling us to go out and serve all the broken places in our world; to go out and be Jesus’ agents of transforming love.