She died on Thursday, August 16, 2018 of advanced pancreatic cancer at her home in Detroit, Michigan. She was 76. 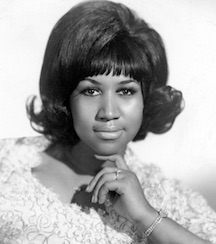 A self-taught piano prodigy, vocalist and songwriter, she became known as the Queen of Soul. She was a musical phenomenon who crossed musical, racial and gender barriers.

Aretha Franklin earned an astounding 18 Grammys and in 1987 she became the first woman inducted into the Rock & Roll Hall of Fame. For more than five decades, she was a singular presence in pop music, a symbol of strength, the women’s movement and the civil rights movement (“Aretha Franklin, Queen of Soul, Dead at 76,” Douglas Wolk & David Browne, Rolling Stone, August 16, 2018).

Despite her failing health in recent years, she returned to the stage in November 2017 to sing at the Elton John AIDS Foundation Enduring Vision benefit gala. Her musical and social voice came through in tracks including “Think,” “Chain of Fools,” and her version of “You Make Me Feel Like A Natural Woman” and “Respect,” the cover of Otis Redding’s song that became an anthem for the civil rights and women’s movements. 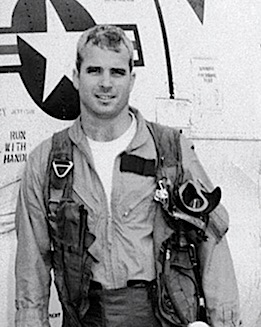 He died on August 25, 2018 in Phoenix, Arizona not long after he was diagnosed with glioblastoma, an aggressive brain cancer. He was 81.

Senator John McCain endured more than five years as a prisoner of war in Vietnam. In 2008, he became the Republican presidential nominee having served as a senator from Arizona for over thirty years.

In a tribute to Senator McCain yesterday, former President Barack Obama said, “Few of us have been tested the way John once was, or required to show the kind of courage that he did. But all of us can aspire to the courage to put the greater good above our own” (“Sen. John McCain, American ‘maverick’ and Arizona political giant, dies at age 81,” Dan Nowicki, Arizona Republic, August 25, 2018).

Many other politicians, world leaders and former presidents also paid tribute to McCain. But it was his farewell statement to the nation that seem call out for the best in everyone: “We weaken our greatness when we confuse our patriotism with tribal rivalries that have sown resentment and hatred and violence in all the corners of the globe. We weaken it when we hide behind walls, rather than tear them down, when we doubt the power of our ideals, rather than trust them to be the great force for change they have always been” (“Why coverage of John McCain’s death dwarfs even Gerald Ford’s, Richard Nixon’s,” Bill Goodykoontz, Arizona Republic, August 30, 2018). 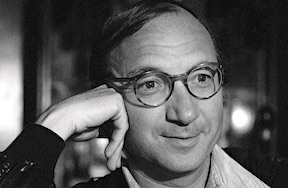 The following day another iconic figure in our national life died of kidney failure at the New York- Presbyterian Hospital. Those who worked with him on Broadway, including Matthew Broderick, Nathan Lane, Christine Baranski, Elizabeth Ashley, Sarah Jessica Parker, Stockard Channing and Marsha Mason, were among the friends and family members who turned out last Thursday evening to paid tribute to a fallen legend: the dimming of the lights in honor of the prolific playwright Neil Simon.

Simon was 91. It was said that the celebration of Simon’s life reinforced his incredible legacy as a scribe, a writer active in stage, film and television. He wrote 32 plays and 17 were hits, including The Odd Couple, Come Blow Your Horn, Barefoot in the Park, The Sunshine Boys, Brighton Beach Memoirs, Biloxi Blues, Broadway Bound, Lost in Yonkers. He was the most successful playwright on Broadway. (“Broadway Friends and Family Remember Neil Simon: ‘We Will Not See His Like Again,’” Cynthia Littleton, Variety, August 30, 2015). His name is synonymous with comedy (“Neil Simon, Pulitzer Prize – winning playwright dies at 91,” Todd Leopold, CNN, August 27, 2018).

Franklin, McCain and Simon experienced more than their share of brokenness throughout their own lives. Yet, out of their own brokenness emerged a wholeness of a lives well lived. It was Simon who wrote: “If you can go through life without experiencing pain, you probably haven’t been born yet.”

Many of you know that I have been away for the last month – on a bit of a working vacation. In the midst of my time away, we were faced with the prospect of a category 5 hurricane making landfall on our islands.

Hurricane Lane passed to the south of us and then veered away from Hawai‘i moving to the northwest. It was a close call, a very close call. I am thankful that we were spared the brunt of the storm.

There was concern that there might be an ocean surge and strong winds along the south shore of all of our islands. As it turns out the impact of the hurricane was felt more deeply on the east side of Hawai‘i island and the east side of Maui and Kaua‘i.

I hunkered down for two days with Kiko, my dog. I cancelled a morning trip to Honolulu for a meeting the day that the hurricane was due to have pass by Maui.

As I thought about returning to be with you this morning, the deaths of an African American soul singer, an Irish American politician and a Jewish American playwright loomed large in my own mind. But more than that I felt heavy-hearted at the loss of three remarkable individuals whose lives reflect the best of what we be in our own lives.

We find in our reading from The Letter of James an interesting interpretation of the good news of the faith we share. Dr. Haruko Nawata Ward is a Professor of Church History at Columbia Theological Seminary in Decatur, Georgia. Dr. Ward writes: “The writer of James . . . used a Greek view of God and the universe and a Jewish view of the law.”

Mixing the two views, she writes, made sense to those to whom James was addressing his letter in the city of Alexandria. It was a letter that was received into the canon of Scripture in the third century when Christianity was still an illegal religion in the Roman Empire (Feasting on the Word, Year B, Volume 1, Bartlett & Taylor, Westminster/John Knox Press, Louisville, Kentucky, 2009, page 16)

Those reading the letter knew that according to Greek philosophy every being has its origin in the highest Being. In this instance a reference is made to God as “the Father of lights” (James 1:17).

Whatever may be said about the Christian community in Alexandria and its understanding of Greek and Jewish thought, it is likely that they understood the call to “be doers of the word, and not merely hearers” (James 1:22). The point is made crystal clear: “If any think they are religious, and do not bridle their tongues but deceive their hearts, their religion is worthless. Religion that is pure and undefiled before God, the Father, is this:” to give thanks to God for all of their wealth and material possessions, knowing that such wealth and possessions are as signs of God’s favor upon us,

Well, that would be far from the truth.

The “implanted word” is this: not that we think only of our wealth and possessions but “to care for orphans and widows in their distress, and to keep oneself unstained by” a world that is slow to listen, quick to speak, quick to anger, filled with all sordidness and rank growth of wickedness. To care for orphans and widows is foundational our faith.

Perhaps that is why it is so reprehensible to me that over 500 children who were separated at the U.S./Mexico border in April have yet to be reunited with their families. A Professor Emeritus of Political Science recently wrote on matters related to immigration a point of view I do not share. He wrote: “Any clear-thinking observer . . . can see that compassion is not a sound basis for foreign policy or immigration policy. Compassion is more likely to lead to contempt than gratitude . . ”

He goes on to write, “Fear is more likely to engender respect, whereas love or compassion is more likely to be regarded as a contemptible sign of weakness.” Well, needless to say, I am just thankful he is a professor of political science and not a theologian (“Does Diversity Really Unite us? Citizenship and Immigration,” Edward J. Erler, Imprimis, Hillsdale College, Hillsdale Michigan, Volume 47, Number 7/8, July/August 2018).

Aretha Franklin, John McCain and Neil Simon were remarkable individuals. Through their own struggles, they touched the lives of many and brought joy and hope to the world. They were gifted individuals, representing the diversity of the United States and in one sense we are no less gifted when we acknowledge that “every generous act of giving, with every perfect gift, is from above coming down from the Father of lights” upon all of us.

We may not be a piano prodigy, a prolific playwright or a politician but we are nevertheless gifted – gifted with the strength that comes from compassion.

Ho’olohe, the Hawaiians would say. Listen and hear. But more importantly - Ho‘opili. Do it!