It’s good to be back. I thought my time away in August would provide me with an opportunity to step away from work and the cares of the world to rest and relax. But that was not to be.

There were meetings to attend in Honolulu and a memorial service for a Maui veterinarian who died a unexpectedly and a couple from Bavaria whose dream it was to reaffirm their marriage vows here in Mākena. And as much as I wanted to shut out the worries of the world, it seemed there were many days fraught with turmoil.

August 12, 2017 was such a day. A young woman named Heather Heyer died after she was struck by a car that plowed into a crowd of counter-protestors who had gathered in Charlottesville, Virginia to oppose a “Unite the Right” rally of white nationalists, white supremacists, Neo-Nazis and members of the Klu Klux Klan.

All of this sounds like old news especially in the devastating aftermath of Hurricane Harvey and news that North Korea detonated an apparent hydrogen bomb hours ago that caused a 6.3 earthquake. There are those now who suggest that Heyer should have known better than to march with members of Antifa, a reference to left-wing anarchists, who some say were no less responsible for instigating the violence that occurred than the right-wing white nationalists and supremacists, Neo-Nazis and Klan members who came armed with guns, bats, and shields.

But we know better. We know there were thousands of others who were in Charlottesville that weekend who were not members of Antifa but residents of Charlottesville and clergy from Christian, Jewish, Muslim, Buddhists and other religious communities. The Rev. Traci Blackmon, an officer of the United Church of Christ of which we are a member church, joined others for interfaith prayer services on Friday and Saturday at St. Paul’s Memorial Church near what has now become known as Emancipation Park in preparation the rally. 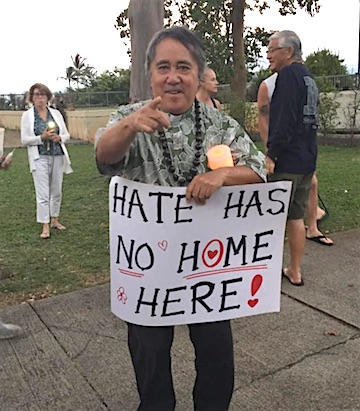 In the aftermath of Heyer’s death, prayer vigils were held across the U.S. and in other countries. Here on Maui, the word went out and within 24 hours people gathered on Sunday evening, August 13, 2017 in Wailuku in front of the state building on High Street. Kahu Tino Cordova of ‘Īao United Church of Christ, Kahu Bob Nelson and Kahu Danette Kong, both of Keawala’i, Kahu Craig Vance of Good Shepherd Episcopal Church, and I were among the clergy who joined over 100 others for the vigil. Ellen, Taka, Larry, Georgia, Cameron, Lloyd, Sandy, Jean, and Auntie Edie were there as well.

A photograph of Heather Heyer was surrounded with candles. Some in the group held signs. Others sang. Some stood quietly.

After an hour, the vigil was brought to a close with a prayer by Kahu Vance, the Rector at Good Shepherd Episcopal Church in Wailuku. We formed a circle and as is our custom here in Hawai’i, we concluded our time together with the singing of “Hawai‘i Aloha.”

People began to bid each other well. There were more conversations and it was then that someone approached me to say he appreciated having the opportunity to be with others.

I told him about my dad and how he served in the 442nd All Japanese American Regimental Combat Team during World War II in the war against the Nazis. I told him that it was not until I was an adult that I learned about the Executive Order (9066) that was issued on February 19, 1942 by President Franklin Roosevelt that called for the incarceration of over 120,000 Americans of Japanese ancestry in ten camps and numerous relocation centers across the U.S. Most of those who were incarcerated were American citizens including women and children.

“I cannot imagine what my dad would say if he were alive today and saw and heard Neo-Nazis marching with torches and declaring ‘Jews will not replace us,” I said.

“I am Jewish,” he said. “I had family who were sent to Auschwitz.”

It dawned on me at that very moment that the 17th century Irish statesman Sir Edmund Burke (1729-1792) was right in saying, “The only thing necessary for the triumph of evil is for good men (sic) (and women) to do nothing.” He also said, “All tyranny needs to gain a foothold is for people of good conscience to remain silent.”

Albert Einstein has been quoted as saying, “The world will not be destroyed by those who do evil, but by those who watch them without doing anything.” And the late Rev. Dr. Martin Luther King Jr. wrote during the period of the Civil Rights Movement in the United States, “History will have to record that the greatest tragedy of this period of social transition was not the strident clamor of bad people, but the appalling silence of good people.” It is a thought worth contemplating in our own day and time ... because now is not the time to be silent.

For me, that is the lesson that comes to us from our reading from The Letter of Paul to the Romans. Paul appeals to his readers in the early church in Rome and to us today to” practice a particular style and way of life that is commensurate with the will and grace of God and that manifests the life of the Spirit ... ” among us in our lives as a communities of faith. (Preaching Through the Christian Year A, Craddock, Hayes, Holladay & Tucker, Trinity Press International, Harrisburg, Pennsylvania, 1992, page 418)

In the first section of our reading (Romans 12:9-13), Paul reminds us our behavior towards one another will be demonstrated through our loving one another “without any pretense” and by living in harmony, showing honor to one another; actively caring for the needs of others and showing hospitality to strangers. The second section of our reading (Romans 9:14-21) contains other injunctions that echo the sentiments found in Matthew’s account of Jesus’ teachings that we have come to know as the Sermon on the Mount. (Ibid., page 424)

Those injunctions move us beyond the church and beyond ourselves.

Paul writes, “Do not repay anyone evil for evil, but take thought for what is noble in the sight of all. If it is possible, so far as it depends on you, live peaceably with all. Beloved, never avenge yourselves, but leave room for the wrath of God: for it is written, ‘Vengeance is mine, I will repay, says the Lord.’”

“No, if your enemies are hungry, feed them; if they are thirsty, give them something to drink; for by doing this you will heap burning coals on their heads. Do not be overcome by evil, but overcome evil with good.” (Romans:19-21)

“Impossible!” some say. But Jesus makes clear in our reading from The Gospel According to Matthew that if we are to be his disciples, his followers it will come at a cost, a great cost. Jesus said, “If any want to become my followers, let them deny themselves and take up their cross and follow me. For those who want to save their life will lose it, and those who lose their life for my sake will find it.” (Matthew 16:24-25)

The religious leaders who gathered in Charlottesville two weeks ago were under no illusion about their presence at Emancipation Park. Yes, they were there as peacemakers committed to be witnesses of non-violence but they were fully aware of the danger. They locked arms with one another as they stood at one of the entrances to the park. They knelt and prayed together.

By one account, the demonstrators who arrived at the park seemed perplexed at the sight of priests, nuns, rabbis, ministers and clerics. They were not quite sure what to make of the presence of religious leaders gathered there that day.

Perhaps not surprisingly, the message of love must have felt like burning coals being heaped upon their heads. It is said that they began to hurl racial, homophobic and religious epithets at them and when it became apparent that the clergy were in physical danger, the police finally intervened.

How is it that there are grown men and women who declare in one voice that “We are a Christian nation” and in another say, “Jews will not replace us.” Jesus, a Jew, died for the expiation of our sins, and not for ours only, but also for the sins of the whole world including those who were carried torches that Friday night in Charlottesville. (1 John 2:2)

If we are to take up our own crosses to follow Jesus, it will not be to plant them in a field or someone’s front lawn. It will not be to set them on fire to instill fear in the hearts of men, women and children because of our own fears.

I said to him, “I cannot imagine what my dad would say if he were alive today and saw and heard Neo-Nazis marching with torches and declaring ‘Jews will not replace us.”

“I am Jewish,” he said. “I had family who were sent to Auschwitz.”

That was all we said to each other. There was nothing more to say. As inconsequential as it may have seemed to others, we stood and we prayed together that Sunday evening in Wailuku. We held signs and we sang.

And then we hugged and walked away into the cool night to find our way home. I do not remember his name but I remember him and I will remember what he said.