Our reading from The Gospel According to Luke begins and ends with harsh and demanding words about what it means to be a disciple or follower of Jesus Christ. Jesus said to crowds of people who were traveling with him one day: “Whoever comes to me and does not hate father and mother, wife and children, brothers and sisters, yes, and even life itself, cannot be my disciple.” (Luke 14:26)

Clearly, Jesus’ sought to overstate or exaggerate a point. While “hate” may be a hyperbole, it does not diminish the potential cost for what it means for any of us to be his disciples. (Feasting on the Word, Year C., Volume 4, Bartlett & Taylor, Westminster/John Knox Press, Louisville, Kentucky, 2010, page 45)

Jesus also seems to overstate another point at the conclusion of his remarks: “None of you can become my disciple if you do not give up all your possessions.” (Luke 14:33) Was Jesus’ trying to put at arms’ length the crowds of people who were traveling with him? Was he trying to warn them of what it would take to follow him?

In either case what Jesus makes evident is that for any of us to be his disciple, it will cost us everything. (Luke 12:33-34) The analogies to building a tower or waging war may also seem equally exaggerated. (“Living the Word: Reflections on the Lectionary,” William H. Lamar IV, Christian Century, August 17, 2016, page 21) But we get the point – whether we are building towers or walls, whether we waging war or waging peace – we would be foolish not to count the cost. 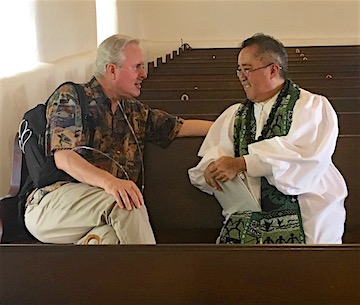 In our reading from Philemon, some will point to Paul’s letter as a model of pastoral care. It is “loving, thoughtful, diplomatic, and carefully theological.” (Ibid., page 38) Much is made about Paul’s aloha for Philemon as his “dear friend and co-worker” and “brother.” (Philemon 1, 7)

Much is also made about others with whom they share a common bond, including Apphia, Archippus and Timothy. But at the heart of the Paul’s letter is his concern for Onesimus, a slave who has run away from his master, Philemon.

Onesimus has found his way to Paul who appears to be under some form of house arrest. Onesimus, whose name means “useful” or “beneficial,” comes to provide his kōkua to Paul. Like Philemon, he has become a convert of Paul’s and all are now “prisoners of Christ Jesus.” (Luke 14:9)

If there is to be peace between Onesimus and Philemon, Paul insists that Philemon must receive Onesimus “no longer as a slave but (as) . . . a beloved brother.” (Luke 14:16) Broadly speaking, there are those who will remind us that nowhere in his letter to Philemon does Paul condemn the institution of slavery.

Defenders of Paul will point out that he was unaware or unconcerned about the impact of slavery on the lives of so many. Yet, we also know that it was Paul who reminded those in the early church in Galatia that “there is no longer slave or free, there is no longer male and female; for all of you are one in Christ Jesus.” (Galatians 3:28)

Some argue that it would fall to later generations of the church to conclude that slavery is opposed to Christian faith. (Ibid., page 42) But if I were a slave in the first century, I probably would not let Paul off the hook so easily, especially in light of our reading from Luke and Jesus’ own words to those who were traveling with him that day.

As a “prisoner of Christ,” Paul knew well enough that Philemon owned Onesimus. Some biblical scholars point out that “slave labor played a minor economic role in the ancient Near East.” (Harper’s Bible Dictionary, Paul J. Achtemeier, Harper & Row Publishers, San Francisco, 1971, page 959) So it would seem that Onesimus functioned more as a domestic servant than as a slave in an agricultural or industrial labor force.

The implication is that slavery in Paul’s day and time was not so bad. But even Biblical scholars agree that slavery was essentially “the total subjection of one person to another.” (Op. cit.) In other words, Onesimus was a possession of Philemon.

Paul’s appeal to Philemon is a command that reflects Jesus’ admonition to those who sought to become his disciples. “If you want to become my disciple, you must give up all your possessions” and for Philemon that would include Onesimus. That is clear. That is very, very, very clear.

In 1838, 272 slaves – men, women and children – were sold to help pay off the debts of Georgetown University in Washington, D.C. The sale, worth about $3.3 million in today’s dollars, was organized by two of the early presidents of the university, both Jesuit priests.

It was announced last Thursday that the university will “embark on a series of steps to atone for the past.” It has taken nearly two centuries and several generations for the university to come to terms with its own legacy of slavery. (“Georgetown University Plans Steps to Atone for Slave Past, “Rachel L. Swarns, The New York Times, September 1, 2016)

Georgetown’s President, John J. DeGioia, announced that he would offer a formal apology, create an institute for the study of slavery and erect a public memorial to the slaves whose labor benefited the institution, including those who were sold . . . ” (Op. cit.) Plans include a Mass of reconciliation in partnership with Jesuit leaders in the U.S. and the Archdiocese of Washington, D.C. 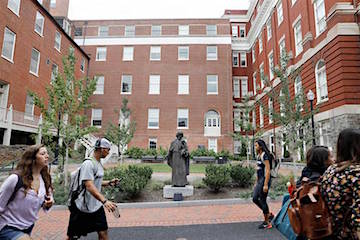 Two of the buildings named after the Rev. Thomas F. Mulledy and the Rev. William McSherry, the college presidents involved in the sale of the slaves in 1838, will be renamed.

One will be called Isaac Hall to commemorate the life of Isaac Hawkins, one of the slaves who was sold and sent to Louisiana in 1838. The other will be called Ann Marie Becraft Hall, in honor of a 19th century educator who founded a school for black girls in Washington, D.C.

An effort is underway to provide preferential status in the admissions process to descendants of those who were enslaved. More remains to be done. It is still unclear if the university will provide financial assistance for descendants of slaves who seek admission.

To say there is a cost if we are to be faithful disciples of Jesus Christ should not surprise any of us. The possession of slaves in the U.S. was among a number of issues that led to the civil war. As many as 750,000 soldiers died, more than the American military deaths of World War I and World II combined.

Perhaps in the heat of the debates of this election year, we ought to take to heart the observation made by the Rev. Dr. Fredrick Borsch, a New Testament professor. Over six years ago, Borsch wrote prophetically: “Imagine an illegal immigrant today. Say that it is José trying to earn money for his family back in Guatemala, or Rosa, now the single mother of children born in this country, but who herself entered the country illegally. There are reasons for laws dealing with illegal immigrants” - in much the same way perhaps that Paul understood Roman laws dealing with slaves – “ . . . Christians are meant to be law-abiding citizens,” Borsch continued, “yet, before all else, the immigrant is a sister or brother in the love of God. Gospel teaching and baptismal vows call Christians to respect the dignity of every human being.”

Then he added: “Imagine receiving a letter – one Christian community to another – commending reconciliation and care” - not deportation – “for Rosa” - No longer an illegal immigrant, but a beloved sister. (Feasting on the Word, Year C., Volume 4, Bartlett & Taylor, Westminster/John Knox Press, Louisville, Kentucky, 2010, page 25)

Imagine Onesimus. No longer a slave, but a beloved brother.