“Nā ulu laʻau: The Trees of the Forest”


An unknown author observed: “The oaks and the pines, and their brethren of the wood, have seen so many suns rise and set, so many seasons come and go, and so many generations pass into silence, that we may well wonder what the ‘story of the trees’ would be to us if they had tongues to tell it, or we ears fine enough to understand.” (The Sun, September, 2014, Issue 465, Harlan, Iowa, page 48, Quotations for Special Occasions, Maud van Buren, 1938) If the trees had tongues to tell their stories of what they have seen, what would they say? 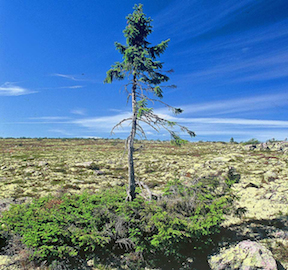 On April 16, 2008 a team of researchers from the Department of Ecology & Environmental Science at Umeå University in Sweden identified what they said is the world’s oldest living tree. The visible portion of the 13 foot tall tree is not ancient, but its root system has been growing for over 9,550 years. (National Geographic, October 28, 2010) The age of the tree was established by using carbon-14 dating.

I imagine Old Tjikko, as the tree has become known, would have many stories to tell including how humans were just beginning to move north into Sweden and the rest of Scandinavia as the last ice age was coming to an end. When the tree took root 7,500 years before the birth of Christ, it was still living in the Stone Age. It would not be for another 5,800 years that Sweden would enter the Bronze Age and it would not be until the year 850 that the first Christian missionary arrived.

Beyond our imagining what stories the trees may have to tell us, we are aware of the importance of trees in our lives and the danger we face whenever we minimize their crucial presence in our world. We are well aware that our human appetite for the resources that trees provide – everything from lumber for the construction of our homes and for making furniture; for the multitude of paper products we consume; for the vital fuel it produces for many in developing countries; even for chop sticks and incense. We have seen the consequence of “the greed of commerce” and the devastating result of what happens when trees are cut down in Indonesia, in the rain forests of the Amazon, and in the old-growth forests of the U.S. – even in the once-thriving sandalwood forests here in Hawaiʻi.

Now all this talk about trees may have you wondering what this has to do with our readings from The Acts of the Apostles and The Gospel According to John. When Paul stood before the Athenians, he acknowledged that they were an “extremely religious” people. He did not pass judgment on them because they worshiped other gods. Instead, he appealed to their religious zeal and fervor.

Standing in front of the Aeropagus, Paul said: “The God who made the world and everything in it is the God of heaven and earth and the one who gives to all mortals life and breath and all things.” (Acts 17:24-25) In other words, God created all things including trees to give us life and breath.

When Nicodemus went to Jesus in the middle of the night, he questioned Jesus about the signs and miracles that he had seen. Like Paul who recognized the Athenians and their religious zeal and fervor, so Jesus recognized Nicodemus’ desire to know about the God of heaven and earth.

Jesus responded to Nicodemus’ inquiry by making several references in verses 5-8 to the presence of the Spirit in the world. The Greek word that is used for the word Spirit is pnuema. Like the Hebrew word ruach that is also used for Spirit, both words are also translated as wind or breath.

All of this brings us to the very familiar passage many, if not most of us, were compelled to memorize growing up in Sunday School: “For God so loved the world that God gave the only Son, so that everyone who believes in him may not perish but may have eternal life.” (John 3:16) God loved the world.

The Greek word that is used for world is kósmos which literally means “something ordered” or more properly “an ordered system” like the universe, like creation. It was out of love that God sent Jesus into the world and the object of that love was creation itself, all of creation – the sky, the land, the water, the sun and the moon and the stars, the birds, the fish of the sea, the animals and insects of the earth, the plants and trees, and yes humankind – all of creation.

Our inclination is to think that we are, as human beings, at the apex of creation. But the verse does not say, “For God so loved human beings only.” Biblical scholars, theologians and many others will argue that God sent Jesus out of love for “the elect.” They contend that the word for the world is best understood to mean those who believe that Jesus is the Christ, the Messiah and they are the only beneficiaries of God’s love and the promise of eternal life.

I would argue that if we do not understand that God so loved all of creation, we are doomed wreaking havoc on the earth. If the trees could talk they would tell us that God planted a garden in a place called Eden long, long ago. It was there that God formed a human being out of the dust from the ground. It is there that God put a man and a woman. (Genesis 2:8)

All that was created was for humankind including every fruit-bearing tree. The man and woman could eat freely from every tree except from the tree of the “knowledge of good and evil.” (Genesis 1 &2) They were warned that in the day that they ate of it, they would die. It was from that one tree, through their disobedience, that death became a reality.

If the trees could talk they would tell us that in time the One whom God sent into the world would be sentenced to death on another tree (John 19:16-37). It would be on the hill of Golgotha that Jesus would breathe his last breath. Out of his death on a wooden cross, the gift of a new life was born.

If the trees could talk they would tell us of the promise of a new heaven and a new earth that is yet to come. The promise is a vision of a river flowing through the heart of a city and on either side of the river is “the tree of life with its twelve kinds of fruit . . . and the leaves of the tree are for the healing of the nations.” (Revelation 22:1-2)

Over the course of the next several weeks our time of worship will run parallel to our Sunday School Program. The Season of Creation will be a time for us to continue to reflect on our interconnectedness with God and all of creation. We will consider our impact on creation and the impact of creation on us. We will look at four components of creation – today the trees and over the next three weeks the land, the wilderness and water.

Each week I will share with you an oli or chant I learned many, many years ago from a friend who was living on Oʻahu at the time. It is a chant that I have shared with some of you on other occasions. It is a chant appropriate for our time together this morning and over the next several weeks.

It comes to us from the work of the late Mary Kawena Pukui, a noted and highly respected Hawaiian linguist and scholar. It was Pukui who authored the first Hawaiian-language dictionary and it was Pukui who composed the oli – “Ke Ao Nani Nei.”

For the nā ulu laʻau – for the trees of the forest – we give thanks to God. Amen.