The prophet Jeremiah was the son of Hilkiah, a priest at Anathoth in what was known as the land of Benjamin. Benjamin was one of the tribes of the kingdom of Israel. Jeremiah lived between 627 and 587 BCE and may have been a descendant of the priest Abiathar, who was banished by Solomon to Anathoth (1 Kings 2:26-27).

It is said that Jeremiah “spiritualized and individualized religion and insisted upon its primacy of the individual’s relationship to God.” (The New Bible Dictionary, Second Edition, 1982, page 563; see also Jeremiah 31) He had witnessed the ways in which Israel had become unfaithful to had forsaken God by worshiping other gods. He was faced with the unenviable task of announcing to the people that the city of Jerusalem would be destroyed as a consequence of their idolatry.

If Jeremiah was the descendant of Abiathar, the prophet Micah was neither of priestly or noble descent. Instead, he came from the common people, being a citizen of the small village of Moresheth in the Judean foothills southwest of Jerusalem.

The words of the prophet Micah continue to ring true even in our own day: “God has told you, O mortal, what is good; and what does the Lord require of you but to act justly, and to love tenderly, and to walk humbly with your God?” (Micah 6:8)

We are to love tenderly. We are to be a kind and loving people. We are to walk with God in humility. Such things are always more easily said than done and as such we often forget the cost or consequence of living such a life.

Counting the cost is what Jesus admonishes others to heed in our reading from The Gospel According to Luke. Jesus addresses the large crowds who are following him and his disciples. (Luke 14:25) He speaks to those who have come to him (Luke 14:26), not to those called out from the crowd to join him. In other words, it appears that those in the crowds are like those who come to him saying, “I will follow you wherever you go.” (Luke 9:57)

Jesus is aware as he speaks, he is responding to the enthusiasm of those who seem unaware that he is moving toward the cross and that his disciples are not exempt from the burden he will bear. It would seem that Jesus is offering words of caution and warning to those who may be caught up in the movement toward Jerusalem as though they were in a march or a parade.

Biblical scholars point out that the use of the word reflects a Semitic way of expressing detachment or a turning away from. It is not the emotion-filled word we often hear when someone screams, “I hate you.”

Hating one’s family or hating one’s own life is not about loathing others or oneself. Instead, it is about understanding that our loyalty to Jesus can and will create tensions. What becomes important or significant is our primary allegiance to him.

As Christians we may be inclined to embrace a life of faith that some view as “spiritualized and individualized.” As such we may find great comfort in the assurance that Jesus died for our sins and all that what is required of us to do is to proclaim the message of personal salvation. But the words of the prophet Micah challenge us to also consider a life of faith beyond ourselves – one that is rooted in justice, love and humility. Living such a life is not without its costs. 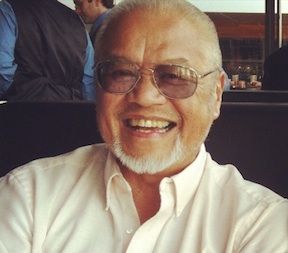 Bert Tom was born in San Francisco in 1933 to Kwong Tong Tom and Hoot Nyuey T. Chin, both from Guangzhou, China. He grew up in Chinatown and served the Presbyterian Church in the city through its outreach to Chinese immigrants at Cameron House. Bert lived such a life of faith.

He was ordained into the Christian ministry of the Presbyterian Church (USA) in 1960. For many years he served as the Associate Presbyter for Mission & Evangelism for the Presbytery of San Francisco until his retirement in 2000. I served as his Administrative Assistant for six years – from 1985 to 1991 – prior to accepting the call to serve the church here in Mākena.

Bert died in early July of acute leukemia, not long after he and his wife moved to Medford, Oregon. Julie had just retired after 17 years of teaching.

Bert was a colleague and a mentor. He was also my pastor and my friend.

Although he left clear instructions that he did not want a memorial service, close family members and friends managed to speak with him to let him know that everyone decided they wanted to celebrate his life by throwing a party for him. He conceded and so it was that several hundred family members and friends gathered in the heart of San Francisco Chinatown last weekend to remember and celebrate his life.

It was a celebration of music and prayers, storytelling and dim sum. It was unorthodox and irreligious. It was filled with the sound of laughter and acknowledgements of loss.

Colleagues shared their memories. Someone shared a written prose. Others simply spoke.

I felt like I was at Zippy’s or Koho’s having dinner. The mix of folks – young and old; men, women and children; gay and straight; Americans of varied ancestries including Mexican, Korean, Chinese, Japanese, Haole, African American, and Polynesian – we were all together in one room.

Amid the written paragraphs about his educational background, work history, service to the church, and his family were reminders of the Bert we all knew. They included the following: “While Bert officially retired in 2000, his workload did not quite speak to that status. He remained committed to several projects and served with a diverse collection of organizations lucky enough to convince him to continue working.”

“Nevertheless, his customary offering remained cooking delectable meals for Julie and supporting her teaching with all sprightly first graders. About ten years ago, he finally took up golf and enjoyed playing almost every Friday with the gang. Their success was not measured by the number of swings taken, but by the number of balls lost.”

“All in all, his family enjoyed Bert’s sense of humor, strength, wisdom and vitality. He especially valued time with his children and grandchildren. These memories serve to remind his family of Bert’s impervious devotion to family, whether that be blood-related or not.”

“His views on gay marriage, the right to ordain transgender and gay people in the church, and other social justice issues highlighted his . . . perspective in life that, at times, surpassed even his 23-year-old daughter’s views. While he may never have intended to be a leader, a mentor, or best friend, he was just that to more people than we can count. He will always remain a champion for equality and equity in social, civil and political issues.”

I know that Bert felt the stress and strain of his life of faith and yet he was resolute in his commitment. It was said that “his faith in humanity was grounded in his belief in the goodness of all beings. His fearlessness and courage in the face of change was grounded in the transformative relationship with Christ – that was his path, but he was open to all other paths and did not view that relationship as a requirement for fearlessness and courage.”

“Bert faced change and future uncertainty with an unfailing hope because he believed deeply and strongly in the power and strength of community . . . Bert understood the church as the Body of Christ, in all its diversity; and that as long as that mission is accomplished together – collectively and collaboratively – constructive change will occur. Bert did not romanticize the church. He saw the church in all of its faults and failings and used appropriate language to describe what he saw.”

“For Bert, what mattered was what God was doing in the streets and alleyways of neighborhoods and cities. It is not the religious vocabulary we use that matters, but how we live our lives for the sake of others.”

The closing sentence of the written program was the following: “In word and deed to the very end, Bert embodied the prophetic charge of Micah: ‘To act justly, to love tenderly, and to walk humbly with your God.” Remarkably the translation for the name Micah is one “who is like the Lord.” (HarperCollins Bible Dictionary, HarperCollins, Revised & Updated, 2011, page PT995) The same could be said for Bert.

I know that Bert’s life of faith was not without cost. But I also know from the gathering of families and friends celebrating his life was filled with the joy of discipleship that comes from living a living faith rooted in justice, love, and humility.

Among the many who spoke about Bert last weekend was someone who said that he would not want us to sit by and assume that all the work has been done. He would want us to move on and to carry on.

My hunch is that Jesus felt the same way when he saw so many following him that day so long ago. He wanted them to know that long after he was gone, the work of a living a life of faith remained. He wanted them and he wants us - to move on and to carry on. He wants us to accept the cost and joy of discipleship and to be his servants in the service of others.