There was no social media back then. No Facebook, Linkedin or Twitter. Nothing to call attention to the latest news of the day – especially as Jesus went about the countryside preaching, teaching and healing people.

But there was “word-of-mouth” and the stories recorded in the books of the Bible to remind us that “there is nothing new under the sun” (Ecclesiastes 1:9). In one sense, it should not surprise us that Jesus responded to the plea by a woman for him to heal her daughter by essentially calling her a “dog” if not worse.

We have grown accustomed these days to hearing such language among grown men in high places. However, if we consider Jesus’ response to the woman, it is a shocking insult for him to make. It is an insult not unlike the insults that are made whenever we refer to another human being as a dog. 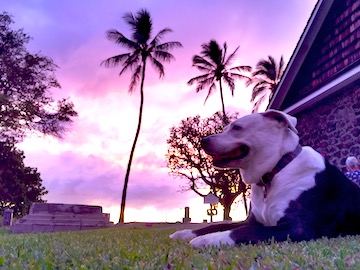 It is an insult that I know is offensive even to my dog Kiko. (Photo of Kiko is from this summer; it was sunset, and she was out in the yard listening to the first song that the Cornell University Chamber Singers were performing in the sanctuary the night of their concert at Keawala'i.)

In our reading from The Gospel According to Mark a woman comes to Jesus and begs him to heal her daughter. She was not Jewish. She was Syrophoenician.

Some Biblical scholars have suggested that Jesus’ response was a way of making clear that his mission was for the Jews and the Jews only. Some say calling her a dog is not as cruel as it sounds but others disagree, including Kiko.

Perhaps that is why her response startled Jesus. “You call me a dog because I am not Jewish. How dare you!”

Others may have felt the brunt of the insult much more keenly and simply walked away, but not her: “Sir, even the dogs under the table eat the children’s crumbs” (Mark 7:28). In that moment, it appears Jesus was jolted into an awareness that his mission to share God’s love for the world was not only to the Jews, but to all people.

In Mark’s account of the healing of the woman’s daughter, we see how God’s love goes beyond the boundaries of race, gender, ethnicity, class, or age; beyond physical condition or sexual orientation. Rather than berating her for her chutzpa, her brashness he tells her, “For saying that, you may go – the demon has left your daughter” (Mark 7:29).

Another story of healing follows as Jesus continues his journey with the disciples along the Galilean countryside. Like the Syrophoenician woman whom he encountered in the region of Tyre, Jesus meets a man in the region of the Decapolis who is not a Jew. It is no coincidence that Mark places both stories in areas that brought Jesus into contact with the woman and the man.

The man is deaf and he has a speech impediment. Those who bring him to Jesus beg Jesus to lay his hands upon the man and heal him.

The Rev. Amy Howe, a Presbyterian minister, notes that Jesus not only released the man who was deaf and unable to speak from his physical affliction, she also reunited him with the communities that had rejected him. “Whenever Jesus heals,” she writes, “whether it is a demon-possessed girl, a man with leprosy, a bleeding woman, or a deaf man, he heals not only the body but [he also heals the broken relationships of each person with their] community” (Feasting on the Word, Year B, Volume 4, Bartlett & Taylor, Westminster Press/John Knox Press, Louisville, Kentucky, 2009, page 46).

For the woman in Tyre and the man in the Decapolis, life in the first century was fraught with great difficulties. We know that the poor and the sick, the orphaned and the widowed, the mentally ill and the physically disabled, the alien and the foreigner were all relegated to the margins of the societies in which they lived.

It would seem that little has changed today. Amy Howe points out that in our own day and time: “There continues to be a sense that if people end up homeless or on drugs, they are weak and at fault. Our world teaches us to shun the dirty, smelly woman ranting on the bus next to us and not to embrace her. Countless children spent empty, abused lives shuttled from one foster home to the next, forgotten and unloved by the world” (Ibid., page 48).

Jesus’ wide-ranging journey brought him into contact with those who were not Jewish. He preached and taught and healed in places near and far (Mark 5:1-20; 6:53-56; 7:24-30; 7:31-37) and in doing so, the message and blessing were taken beyond geographical and ethnic or racial boundaries (Preaching Through the Christian Year B, Craddock, Hayes, Holladay & Tucker, Trinity International Press, Harrisburg, Pennsylvania, 1993, page 406).

The Jewish leaders were critical of Jesus. The disciples misunderstood him. But the people, whether Syrophoenician or Jewish, saw the signs of the kingdom of God coming into fruition.

Today, there is a national debate in the U.S. about diversity and whether or not diversity strengthens us as a nation. There is a great fear among some that our acceptance of diversity will undermine the common good (“Does Diversity Really United Us? Citizenship and Immigration, Edward J. Erler, Impris, Hillsdale College, Hillsdale, Michigan, July/August 2018, Volume 47, Number 7/8, page 3).

The argument that is made is this: “Greater diversity means inevitably that we have less in common, and the more we encourage diversity the less we honor the common good. Any honest and clear-sighted observer should be able to see that diversity is a solvent that dissolves unity and cohesiveness of a nation ... ” (Ibid., page 4).

We celebrated Labor Day not too long ago. Some of you know the history of the labor movement in Hawaiʻi. We know that in the early years, the American plantation owners provided housing for immigrants who were brought to Hawaiʻi to work in the sugar cane fields.

The plantation owners constructed housing and segregated the communities by race and ethnicity. The argument was because they were different – their language, their food, their religion – it was best to keep them separated. So our grandparents would talk about how they grew up in the Filipino camp or the Japanese camp or the Chinese camp or the Hawaiian camp.

But regardless of the camps in which the lived, living together on an island meant that over time our grandparents and parents ended up going to school together and working together. In the process, pidgin English emerged and as they began to communicate with each other, they found common ground and something remarkable happened.

Strikes were held among Japanese and Filipino workers calling for better wages and living conditions. There was no weakness, only strength .

When the late Keoana Hanchett of Hau’ula Congregational Church on the island of O‘ahu wrote the hīmeni, she it made clear that the kaona or hidden meaning was in the word nā pua – flowers. Keoana said, “In Hawaiian poetry, nā pua is another word for children.”

The kaona, then, of Nā Pua O Ke Akua is this: “In God’s garden grow children of every color. The lei that is strung is a lei of children woven together with faith, love and hope. It is a beautiful lei that includes a Syrophoenician girl because Jesus cared for her.