The Rev. Dr. Andrea Ayvazian is the former senior Pastor of the Haydenville Congregational Church, United Church of Christ in Western Massachusetts. At one time she served as the Dean of Religious Life at Mount Holyoke College. She is an educator, singer and songwriter whose lifelong concerns have focused on peace and social justice.

During her time as pastor at Haydenville, the church grew from 13 active members to a weekly attendance of around 130 people with 250 people on the church roll. (Daily Hampshire Gazette, Jerrey Roberts, November 26, 2016) She retired on January 1, 2017 in order to pursue her concern about climate change and its impact on the future well-being of the earth through the interfaith organization she helped to establish what has become known as the Religious Witness for the Earth.

I came across one of her writings about a man who stood in front of the White House many, many years ago. He stood there, “ ... night after night with a candle – sometimes alone.”

It was another time, another war.

She recalled how a reporter interviewed him one evening as he stood in the rain. The reporter addressed him by name and then asked, “Do you really think you are going to change the policies of this country by standing out here alone at night with a candle?”

One person. One candle.

The Rev. Robert Wright Lee, a descendant of a nephew of General Robert E. Lee, resigned last Monday, September 4, 2017 as pastor of Bethany United Church of Christ, our partner congregation, in Winston-Salem, North Carolina. Lee began serving as pastor in April of this year after graduating from Duke Divinity School. He came to our national attention after denouncing his relative’s legacy on NPR (National Public Radio) and elsewhere.

It was the week after the violence in Charlottesville that took the life of Heather Heyer and injured many others that he spoke to NPR’s Weekend Edition. I listened to the interview and was struck by what he said about the statute, explaining that his objections to his uncle’s legacy were rooted in his Christian beliefs. 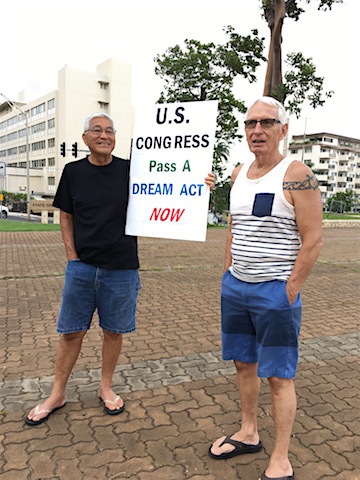 When he was asked by the interviewer how the members of the church felt about his message, he said, “Well, I would say it’s not the message that we’re used to hearing from our pulpits. But maybe now is the time to start having those messages.”

“We have not spoken out for people of color, and we have to start doing that if we want to make a difference in the world and if we want to be relevant as a church in the 21st century.”

In the week that followed the radio interview, Lee appeared on the MTV’s Video Music Awards and struck the same chord as before. He was there to introduce Susan Bro, the mother of Heather Heyer, who was invited to join him in presenting one of the awards.

Needless to say not everyone in the church approved of his message. Some of you may have read his blog post. He wrote, “We are called by God to speak out against hate and evil in all its many forms. There are so many good things going on with this congregation and I do not want my fight to detract from the mission. If the recent media attention causes concern with my church, I reluctantly offer my resignation.”

While he resigned with reluctance, he said in a statement, “A theologian I admire speaks of costly grace and sometimes speaking up costs more than we could have imagined.” Although his time at Bethany was brief, he added, “I love my church and will always have fond memories there for my first pastorate.”

What might Lee have said if the ireporter asked, “Do you really think you are going to change the policies of the country by saying what you said?” Perhaps like the man standing alone with the candle, his response would have been no different, “Oh, I don’t do this to change the country. I do this so the country won’t change me.”

One person. One voice.

Our response to our experiences in life – whether we look at ourselves as individuals or as a community or a nation – ought to be rooted in our faith. In his letter to the church in early Rome, the Apostle Paul calls our attention to “the obligation to love our neighbor.” It is a theme of corporate responsibility – something we do together as a church and as a people – that is treated in previous readings from Paul’s letter to the Romans. (Preaching Through the Christian Year A, Craddock, Hayes, Holladay & Tucker, Trinity International Press, Harrisburg, Pennsylvania, 1992, page 431)

It has been said that we “misconstrue love if we try to remove any sense of ought from it. To say that love does not obligate us renders it anemic. In fact, love in the biblical sense obligates in a compelling sense. It locks us into active concern for others.” (Op. cit.)

But we know it is the one who loves that fulfills the law. To say that our system of jurisprudence or system of laws is based, in part, on Mosaic law would not be an understatement. There is no doubt in my mind that the U.S. Conference Catholic of Bishops understood this when they responded to comments made by former White House chief strategist Steve Bannon. Bannon, a Catholic, accused the church of an ulterior motive in advocating on behalf of undocumented immigrants to the U.S.

It must be said that there is some truth to what Bannon said. Statistically, one out of every three American Catholics now identifies as Latino or Hispanic. That number is expected to grow.

The Pew Research Center reported that in 2011, 82% of undocumented immigrants living in the U.S were Christian, most coming from Latin American. But the Catholic bishops never argued that Christians should get special treatment.

In January of this year, the bishops disagreed with the announcement that Christian refugees would be given priority for entry into the U.S. Bishop Joe Vásquez, Chair of the Bishops’ Committee on Migration said, “We believe in assisting all those who are vulnerable and fleeing persecution, regardless of their religion. This includes Christians, as well as Yazidis and Shia Muslims from Syria, Rohingyas from Burma (or Myanmar), and other religious minorities.” (Op. cit.)

When Bannon argued that the church’s position on immigration is an opinion, not a doctrine, Cardinal Timothy Nolan of New York agreed that it is not a matter of Catholic doctrine. It goes much deeper. It goes beyond doctrine to what the Bible teaches.

Nolan said, “ This is not an issue of Catholic doctrine because it comes from the Bible itself. And the Bible is so clear, so clear that to treat the immigrant with dignity and respect, to make sure that society is just in its treatment of the immigrant is Biblical mandate.”

“It’s clear in the Old Testament. My Jewish neighbors remind me of that all the time and it’s clear from the lips of Jesus when he said, ‘Whatever you do to the least of my brothers (or sisters) you do to me. When I was a stranger - meaning an immigrant or refugee – you welcomed me.’” (Op. cit.)

There are many who argue that the Deferred Action for Childhood Arrivals (DACA) is unconstitutional and is, therefore, against the law. It is a convenient argument, but we are reminded in our reading from Romans that “if we love our neighbor we have fulfilled the law.” (Romans 13:8).

Monsignor Kevin Sullivan of the New York branch of Catholic Charities USA conceded that when it comes to immigration, Bannon’s argument that whether it is one of the bishops, cardinals, priests or even the Pope speaking up , it’s just “another guy with an opinion.” Sullivan responded by saying, “We’re all just borrowing our opinions from another guy. And that guy is Jesus.” (2017 Cable News Network, Inc., Time-Warner Company)


[ The photo above shows Uncle Taka Harada and Kahu Bob Nelson, joining Lloyd Nebres, who had organized an impromptu vigil last Friday, Sept. 8th, in front of the State Building in Wailuku, to protest Pres. Trump's decision to end DACA. ]