“A Wideness in God’s Mercy”

It happened on the morning I was due to offer the opening blessing for the second annual Advanced Maui Optical & Space Surveillance Technologies Conference or what is more simply referred to with the acronym as the AMOS Conference. Some of the most diverse and highly capable optical telescopes; instrumentation including adaptive optics, spectrometers, photometers, radiometers and processing capabilities are concentrated atop Haleakalā at the Maui Space Surveillance Complex. 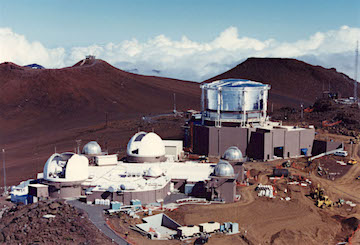 The annual event in Wailea brings together operators, researchers, technologists and system developers who are working in many areas of space situational awareness. While all of this may sound intimidating, I learned very quickly that there is a vast debris belt around the earth that is filled with years of space “junk” – bits and pieces of equipment and other debris that are now in a perpetual orbit around the earth.

It is the kuleana or responsibility of the space surveillance complex to track all of the debris – debris that can affect and sometimes destroy communication satellites and other equipment circling the earth. Over the last year protests against the construction of a Thirty Meter Telescope on the summit of Mauna Kea refocused attention to the Daniel K. Inouye Solar Telescope under construction on Haleakalā.

There are those who question the construction of the telescopes on what is identified as state conservation district land. Others question the impact on the cultural landscape of the mountains and those who see Mauna Kea and Haleakalā as sacred sites not intended for such development.

For almost two decades participants at the AMOS Conference have faced numerous challenges. But it was on the morning of September 11, 2001 that we were jolted by a stunning event.

My nephew called early that morning as I was preparing to leave home for the conference. All he said was, “Uncle, turn on the news!”

I saw what was the re- broadcast of the first plane hitting one of the towers and then the second plane hitting the other tower. Within less than an hour I received a telephone call from the conference organizers that the gathering had been cancelled. The uncertainties of the morning increased as reports were made of a third plane crashing into the Pentagon and a fourth plane being brought down by passengers who fought with the hijackers on board United Airlines Flight 93 over Pennsylvania.

But by the next morning I received another call that the conference was back on. Because all domestic flights had been grounded for an indefinite period of time, all of the conference participants who had travelled here would not be able to leave Maui. The response to the attacks in New York, Pennsylvania and Washington, D.C. eventually plunged us into a war in Iraq that ended for the United States in December 2011. As we remember those who were killed and injured on that September day fifteen years ago at the Twin Towers, the Pentagon and the field outside Shanksville, Pennsylvania, we also remember those who were killed and wounded in Iraq in the years that followed and those who continue to be killed and wounded in what has become an ongoing war with no apparent end in sight.

At the time the decision was made to invade Iraq, I counted myself among those who felt it was important for us to take some time to consider what had happened and to come to some understanding about how best to move forward. But our penchant was to react to the acts of hostility with our own inclination to inflict harm upon those whom we believed had become our enemies.

For many, the attacks of 9/11 constituted acts of war and our inclination was “to go to war.” No mercy.

As we look back over the last 70 years, over 250 wars have been fought since the end of World War II. It is estimated that over 23 million people have been killed, tens of millions more have been made homeless and countless millions injured. (War: An Overview, Peace Pledge Union)

Over 90 per cent of the casualties have been civilians. Among them, 3 out of 4 have been women and children. (UN World Food Programme, 1998) Over the last two and a half decades over 50 million people have been displaced. (UNDP Human Development Report 2000)

In the past decade, 2 million children have been killed and as many as 6 million have been seriously injured or disabled. (UNICEF, State of the World’s Children, 1995, page 2) In many countries around the world, children have been subjected to horrific violence as young combatants. Some 300,000 children are now serving as child soldiers. They range in age from 10 to 18 years. Some are younger. (Human Rights Watch)

A recent article in The Maui News reported that over 28 million children “around the globe have been driven from their homes by violent conflict, with nearly as many abandoning their homes in search of a better life, according to a UNICEF report released Tuesday (September 6, 2016).” (The Maui News, September 7, 2016, A10) Another 20 million are migrants, driven from their homes by poverty and gang violence among other things.

The carnage is due, in part, to the more than 500 million arms and light weapons in circulation around the world – one for about every 12 people. Small arms and light weapons abound through illegal trade and it would come as no surprise to any of us that the U.S. is among the top 10 in exports of arms and weapons to countries around the world. (UN Conference Brochure, Illicit trade in Small Arms, 2001)

Just last week President Barack Obama pledged to help clear away 80 million unexploded bombs that the U.S. dropped on Laos a generation ago. Over 2 million tons of ordnance including weapons, ammunition, combat vehicles and equipment were dropped in a covert, nine-year chapter of the war in Vietnam. Thousands upon thousands of Lao continue to be injured from unexploded bombs. (The Maui News, Wednesday, September 7, 2016, A1)

Global military spending has reached $781 billion. In the U.S. alone, it was estimated in 1999 that 49% or nearly half of all federal tax revenues at the time went towards current or past military costs. (worldrevolution.org) There are those today who are convinced we need to spend more.

What are we to say and what are we do as followers of Jesus Christ in response to the violence in our world? Among the 150 hymns Frederick Faber wrote and composed was our opening hymn.

As a child, I was always aware that in times of war there were people on different sides of a battle praying to the same God. Faber reminds us that there is no place “where earthly sorrows are more felt than in God’s heaven.”

Perhaps, like the parable of the sheep recorded in The Gospel According to Luke, we have all lost our way in the violence of the fog of war. The prophet Isaiah minces no words when he pronounces “judgment on corrupt rulers, priests and prophets” in Jerusalem. “Therefore hear the word of the Lord, you scoffers who rule this people in Jerusalem. Because you have said, ʻWe have made a covenant with death . . . we have made lies our refuge and in falsehood we have taken shelter.’” (Isaiah 28:15)

Paul confesses that he was “a man of violence” and so in essence, we can say he made a covenant with death. “But I received mercy,” he continues and know “that Christ Jesus came into the world to save sinners – of whom I am the foremost.” (1 Timothy 1:12-17)

If there is to be joy in heaven, it will come when our swords are turned into plowshares and our spears into pruning hooks. (Isaiah 2:4) It will be when, like Paul, we turn from the violence of our world with “the faith and love that are in Christ Jesus.” (1 Timothy 1:14)