“Nā pua o ka honua: The Flowers of the Earth”


The plane touched down at the Kelowna International Airport in British Columbia, Canada in the early Fall over fifteen years ago. I had accepted to an invitation to serve on a writing team that was developing new Christian education material with writers from Canada, the U.S., Australia, Scotland and England. 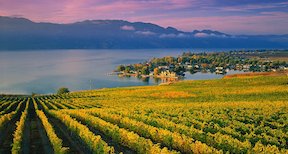 Housing was provided at a college campus not far from the airport. The two-week conference included sessions which were held throughout the day and evening. It was a long, arduous process but one which eventually came to fruition with the publication of the curriculum that came to be known as Seasons of the Spirit.

We lived, prayed, ate, worshipped and studied together. But we also had time to "play" and to become acquainted with the surrounding community that included legendary stories of the 50 foot-long sea serpent that inhabited Lake Okanagan.

One evening we gathered at a bookstore in downtown Kelowna to meet a group of Aboriginal women and girls from Australia. They were guests of the First Nation elders of Canada.

A large tarp was placed on the floor and covered with large grains of sand brought in from the lakeshore. It became evident as the evening went on that the sand from the lake was coarse and unlike the sand the women were accustomed to back in Australia.

An elder sat on the floor flanked on either side by several Aboriginal girls. She pressed her finger into the sand and began to draw figures and explained that it was from Dreamtime that one was able to comprehend the Aboriginal understanding of the world and of creation.

Through song, dance, painting, sand art and storytelling, Aborigines have maintained a link with what they called the “Dreaming” – a time some say spans between 50,000 to 65,000 years. It is a story rooted in the land.

There was no word for other existing countries so the Aborigines had know word for the continent or country we know as Australia today. Instead they identified by the name the land or locality in which they lived.

An Aboriginal elder said: “Inside of me is spirit and land, both given to me by the Creator Spirit. There is a piece of land in me, and it keeps drawing me back like a magnet to the land from which I came. Because the land, too, is spiritual.” (Rainbow Spirit Theology, Harper-Collins Religious, 1997, page 12) He added: “The spiritual link with that piece of land goes back to the ancestors in the Dreaming. This is both a personal and sacred connection – between me and the land, me and my ancestors.” (Op. cit.)

I know there are those who would dismiss the Aboriginal view of land as the belief of animists and caution that there is no other God but Yahweh. Some would pride themselves and say, “We worship the Creator, not creation!” Some would argue that the idea that everything has a spirit or soul – animals, plants, rivers, mountains, stars, the moon and the stars –is anathema to the Christian faith.

In both accounts, “human actions outside of God lead to the stressing and breakdown of human relationship,” and a separation from the land. (Seasons of the Spirit, SeasonsFUSION, Season of Creation, Pentecost 2, 2014, Wood Lake Publishing, 2013, page 46) In beginning of creation, humankind was one with the land. But as a consequence of “the first sin of the first human beings” we learn not so much about the origin of sin as the origin of its painful effects on human life. (Preaching Through the Christian Year B, Carddock, Hayes, Holladay & Tucker, Trinity Press International, Harrisburg, Pennsylvania, 1993, page 300)

As a result God says, “Cursed is the ground because of you.” (Genesis 3:17) The ground is cursed not because of any action taken by God but because human actions. 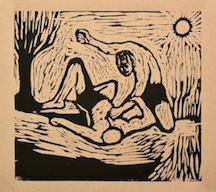 In time the sons of Adam and Eve would become embroiled in an act of family violence. Cain kills Abel out of anger and by doing so his relationship with his brother, with his family and with God are all broken. By assuming that he had divine sovereignty over life by ending a life, Cain repeated the sin of his parents by presuming himself to be like God.

God asks, “Where is your brother Abel?”

Cain responds by basically saying, “How should I know? Do you expect to me to be my brother’s keeper?”

Does Cain show any remorse? No. He appears more concerned about his own livelihood and well-being.

“Oh, poor me,” Cain laments. “I will be a fugitive and outlaw wandering the earth. Anyone who meets me may kill me.”

At first glance, it would seem that God is letting him off the hook. Cain’s life is spared but not before God makes clear that his life will be marked with the knowledge that he killed his brother Abel. He learns the consequence of his sin: “Now you are cursed from the ground.” (Genesis 4:8-16)

“Cursed is the ground because of you! You have brought this upon yourselves.”

“What have you done to your brother and sister? Listen, their blood is crying out to me from the ground! There will be no harvest this season. You have destroyed them with your rockets and bombs and landmines. There is no harvest on the ground, only blood. Now you are cursed from the ground.”

We are mindful that it is in the brokenness of the cross of Jesus Christ we claim God’s redemptive grace, mercy and love for us and for the world. We are mindful of the familiar words from The Gospel According to John that we shared with one another last Sunday: “For God so loved the world that God gave his (sic) only Son so that everyone who believes in him may not perish but may have eternal life.” (John 3:16)

God so loved the world that Jesus was sent to restore all of our broken relationships.

Over the course of the next two weeks the manaʻo or thoughts I want to share with you will continue to run parallel Sunday School Program. The Season of Creation will be a time for us to continue to reflect upon the ways were are connected with God, with one another and with all of creation. We will consider our impact on creation and the impact of creation on us. 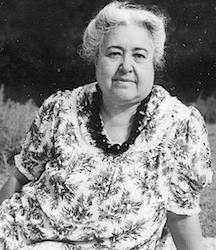 Each week I will share with you an oli or chant I learned many, many years. “Ke Ao Nani Nei” was composed by the late Mary Kawena Pukui, a noted and highly respected Hawaiian linguist and scholar.

Before leaving the bookstore that evening, we had an opportunity to thank the Aboriginal women and girls. There was great wisdom in the “Dreaming” stories that were told reminding us that are all of our stories are in the land.

For the nā pua o ka honua – for the flowers of the earth and for the land itself – we give thanks to God. Amen.