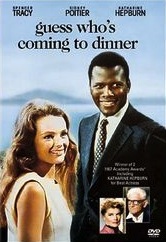 It was only six months earlier on June 12, 1967, the day before my 18th birthday that the U.S. Supreme Court struck down anti-miscegenation laws across the country. I considered that a very auspicious moment since I was born to parents whose ancestors were Japanese, Hawaiian and Portuguese.

The film tells the story of a young white woman who has had a whirlwind romance with a young black man. We learn that they met each other while on vacation. Where else – but here in Hawaiʻi.

The plot unfolds when the young woman returns to her parents’ home in San Francisco with her fiancé for dinner. It is during the dinner that the main characters begin to pair off in private conversation.

The film portrayed her fiancé as a young doctor who graduated from a prestigious school, began innovative medical initiatives in Africa, refused to have premarital sex with his fiancée despite her willingness, and left money in an open container on his future father-in-law’s desk in payment for a long distance call he made. Despite what appears to be an idealistically perfect young man, we begin to see the reaction of family and friends and the discomfort of their parents as they sit down at the dinner table to eat.

At one point in the film the question is asked: “Guess who’s coming to dinner?” That may have been one of the questions the Pharisees and scribes asked themselves one day when they noticed that tax collectors (those who collaborated with the Roman government in collecting revenue from their own people) and sinners (not a moral description but a term for social outcasts) were coming to listen to Jesus. (Preaching Through the Christian Year – C, Craddock, Hayes, Holladay & Tucker, Trinity Press International, Harrisburg, Pennsylvania, 1994, page 408)

They did not hesitate to grumble and say, “This Jesus welcomes sinners and eats with them.” (Luke 15:2; Mark 2:15-16; Matthew 9:10-11; Luke 5:29-30) They appear to express their discomfort but they also appear to express their resentment. I imagine they may well have whispered among themselves: “My God, doesn’t he know who they are?”

The word welcomes could mean that Jesus is hosting these persons at his table and that he is not simply present with them at someone else’s dinner table. Regardless of who is the host, what is significant is that sinners – outcasts – are found sitting down with Jesus to share a meal. Being at the same table with them became a demonstration of how fully he welcomed and accepted them.

Someone said, “It is easy enough to sit at a safe distance and cheer on Jesus as he welcomes sinners and socializes with them; it is not so easy to be his disciple in the matter.” In other words, would we be able to do the same? (Ibid., page 409) Would we be able to welcome those who are pushed to margins of society – the mentally ill, the homeless, the recovering drug addict.

Jesus welcomes those who have lost their way sometimes through no fault of their own. He said, “There is joy in the presence of the angels of God over one sinner who repents.” (Luke 15:10)

For those of us who have grown up in the church we are inclined to believe that the sinner who repents is the one who lies, cheats, or steals. We imagine a sinner to be someone who drinks or does drugs; someone who swears and smokes.

We are quick to make moral judgments about how others live their lives. But the sinners Jesus welcomes are those who have lost their way.

We associate the word “repent” with guilt and so we seem to believe that sinners must turn away from their sins. While some of that may be true I believe that the joy celebrated by the angels in heaven is over the one who repents, the one who turns around and finds his or her way back home to God.

The apostle Paul was someone who lost his way. He said of himself, “I was formerly a blasphemer, a persecutor, and a man of violence.” (1 Timothy 1:13) Yet he makes clear that he is grateful to Jesus and in our reading from The First Letter to Timothy, we have his prayer of thanksgiving.

By his own account, his call as a follower of Jesus was a gift of grace – or lokomaikaʻi, the Hawaiians would say. (1 Corinthians 15:9-10) Paul writes, “ ... the grace of our Lord overflowed for me with the faith and love that are in Christ Jesus. The saying is true and worthy of full acceptance, that Christ Jesus came into the world to save sinners ... “ (1 Timothy 1: 15-16)

In our reading from The Gospel According to Luke two parables are highlighted – the lost sheep and the lost coin. What is significant about both parables is the joy of finding what was once thought to be lost.

It is a joy so abundant that it calls on others to share in it. That is the joy that is celebrated in heaven in the presence of God and the angels. Jesus calls on the Pharisees and scribes to join him and heaven in celebrating the presence of tax collectors and sinners.