From time to time, some of you have amused yourselves, at my expense, whenever a weekend approaches, with the following question: “So, Kahu, how’s the sermon for Sunday coming along?” If it’s been a particularly busy week I usually find myself leaving the office late Saturday afternoon with one reply: “Well, so far, I have a blank page.”

As I left the office yesterday afternoon Lloyd, our Administrative Coordinator, was well aware of what turned out to be another very busy week. I was up early Wednesday to offer a blessing for opening of the 19th AMOS Conference that was held in Wailea.

Thankfully, Hurricane Olivia had already moved south away from us and on to the northwest. There was no rain and no ocean surge here in Mākena, only a very short period of brisk winds that littered the yard with a couple of tree branches and lots of leaves.

The acronym, AMOS, stands for Advanced Multi-Optical Space Surveillance System. Over 800 conferees were in attendance from over 20 countries. The surveillance system basically tracks objects in the debris belt that encircles the earth. There are hundreds of thousands, if not millions, of pieces from satellites and other space craft that did not make it back into the earth’s atmosphere.

In the days that followed the conference, we remembered and celebrated the life of Janis Elliott of Carmel, California and Kīhei in a memorial service that was held here on Thursday morning. Janis and her late husband, Randy, were an active part of our church family whenever they were on island at their “home” in Wailea. Janis ashes’ were released into the waters off Maluaka Beach.

On Friday, I made my way up to Makawao for an early evening blessing of an art gallery for an artist who literally paints with dirt. She has figured out how to combine the various colors of soil with watercolors, oil and acrylic mediums to create a color palette that is unique. 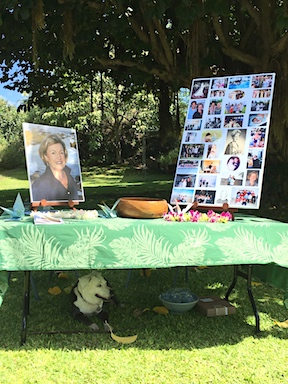 On Saturday, family members and friends of Carol Suzuki of Wailea gathered to remember and celebrate her life. The floral arrangements this morning are a testament to how much she touched the lives of so many.

When I met with Bob, her husband, and their sons Mark and Ben, to plan for the service, Bob said a request would be made in the obituary, “No flowers, please.” Well as you can see that didn’t work.

Like Janis and Randy, Carol and Bob were an active part of our church family.

As I left office yesterday I was convinced that Lloyd was about to ask me, “So, Kahu, how’s the sermon coming along?” Before he could ask the question, I said: “Well, so far, I only have a blank page.”

But I was already aware of our reading from The Gospel According to Mark. I wondered about what lessons I could apply from the reading to week I had just experienced. The AMOS Conference is a highly technical conference and all of the panels, presentations, exhibits and displays were, to borrow a phrase, “All Greek to me.”

But I imagine the scientists who were at the conference would say the same of those of us who are engaged in the study of theology and be quick to say as they look at the Bible: “It’s all Greek to me.” And they would be partially right to say that because it is literally true - at least half of the Bible was written in Greek; the other half in Hebrew.

The question may be asked as we consider our reading from Mark: “What are the signs and symbols of God’s presence that surround our everyday lives?”

The week for me was a part of my everyday life.

Jesus declares openly to them that he is going to suffer and be rejected and killed. It is not something that Peter wanted to hear. How can that be? Why would that be so?

Peter and the other disciples had already been with Jesus as he spent his previous days preaching, teaching and healing people. What reason would there be for all of it to end?

Like the other disciples, Peter is unable to understand or accept what Jesus said (Preaching Through the Christian Year B, Craddock, Hayes, Holladay & Tucker, Trinity Press International, Harrisburg Pennsylvania, 1993, page 411). That Jesus begins to teach them that “after three days [he would] rise again” [Mark 8:31) made no sense to Peter or the others.

Suffering and death is not what they wanted to hear. They were apparently looking for a Messiah who would establish God’s rule with power and authority and free them Roman oppression and domination (Feasting on the Word, Year B, Volume 4, Bartlett & Taylor, Westminster/John Knox Press, Harrisburg, Pennsylvania, 2008, pages 69-70).

The disciples respond by pointing out that some say he is John the Baptist, others say Elijah and still others, say he is one of the prophets (Mark 8:28). Peter is quick to say, “You are the Messiah” (Mark 8:29).

But he balks at what Jesus began to teach them about what was to come. Jesus rebukes Peter. Jesus then calls a crowd of people to join the disciples and it is then that he makes clear that all of them are to live lives of self-denial and to “take up their cross and follow” him (Mark 8:34).

Many will say that is the point of reading.

But for me the question remains: What difference does the reading make in light of what I’ve experienced in recent days?

At the risk of sounding heretical, it doesn’t matter to me - at least for this week - to say Jesus is the Messiah. What matters is Jesus was someone who suffered and someone who died and in his suffering and dying, I see in him someone who understands all of the turmoil and tragedies of our own lives; all of the pain and suffering; all of the fear and despair; all of the sorrow and distress.

Janis died in her home following several years of declining health. She was 91. Carol died after a two and a half year battle with cancer surrounded by her family. She was 66.

I learned this week that a young man, who is family to a member of our congregation, committed suicide and a member was diagnosed with a brain tumor.

Sometimes it can feel like the weight of the world is pressing in us on every turn, breaking our hearts and minds, our bodies and spirits.

“What are the signs and symbols of God’s presence that surround our everyday lives?” That presence for me is knowing that Jesus knows of our suffering because of his own suffering and the suffering he saw in others whom he sought to teach and heal.

We can say Jesus suffered and died for our sins and three days later, rose from the dead. That may be comforting to some as we consider the inevitability of our own death.

But I find greater comfort in saying that in his suffering and dying, I see in Jesus someone who sees all of the broken places in our lives. Jesus died to save us, not simply from our sins. He died to save us from brokenness we experience in our lives.

He died to restore us to wholeness.

As followers of Jesus, we are called to restore to wholeness the lives of those who have been broken by the fear and anger; hatred and envy; jealousy and bitterness; avarice and selfishness. That is our call.