“In the Midst of Sorrow” 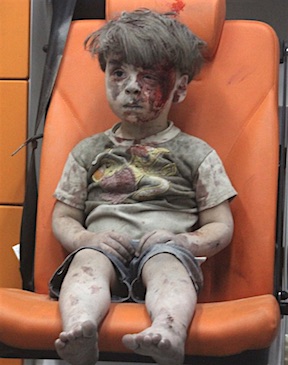 His name is Omran Daqneesh. On August 17, 2016, a little over a month ago, he was pulled by rescue workers from his home that was destroyed in Aleppo by Syrian or Russian aircraft that had bombed the area. (“Pulling kids from war’s rubble,” The Christian Science Monitor Weekly, September 5, 2016, page 33)

Omran, age 5, was among other ash-covered children who were removed from the rubble in the Qaterji neighborhood of Aleppo where the bombing occurred. Among the other children was his ten-year-old brother Ali. Ali died four days later from his injuries.

Mahmoud Rslan, a 27-year-old photographer from Aleppo, took the photograph of Omran. Rslan’s photograph quickly became the iconic symbol of the crushing civil war in Syria.

He recalled the scene at Omran’s family home after the bombing stopped. “Omran’s father was rescuing him. He removed him from under the rubble and handed Omran to me and other people from the balcony. His dad was bleeding from an injury to his head. I saw Omran. First, I filmed a video when Omran was removed from underneath the rubble and was taken to the ambulance. It was all dark and only the moonlight was there. I changed into photo mode when the child arrived [in the ambulance].

I had mixed feelings about the situation. While taking the photo and looking at the boy, I was crying, while pleased that I was doing my job and taking a powerful photo. I wanted the focus to be clear.

When I really started to sob was when I saw the eight-year-old sister of Omran. His sister was calm as him and she had a similar injury in the face and eye. She made me cry 10 times stronger. We are humans, we are people. I was crying for the children and fearing that my daughter may go through the same experience.” (“The Night Omran Was Saved,” Andrew Katz, Time Magazine, August 26, 2016)

I thought about Omran, blooded and stunned beneath the rubble of his family home, and Rslan’s response to what he had witnessed that day. It was Rslan’s lament not only for Omran but for his sister and his brother and for all the children in Aleppo.

Our “Call to Worship” this morning comes from The Book of Jeremiah. It is Jeremiah’s lament over Judah as he grieves for the people. Though it is not always clear who the speaker is – whether it is God or Jeremiah – there is nevertheless a poetic rhythm to Jeremiah’s account of the anguish of God and his own anguish that comes “from (the) people’s failings and plight.” (Feasting on the Word, Year C, Volume 4, Westminster/John Knox Press, Louisville, Kentucky, 2010, page 74)

Stephen Reid is a Professor of Christian Scriptures at George W. Truett Theological Seminary at Baylor University in Waco, Texas. He reminds us, “Every generation can hear the lament of Jeremiah with new ears, because demoralization and suffering span the centuries and cultures.” (Op. cit.) Such sufferings happen among peoples and nations and within our own lives and in our own families.

I would dare say that Jeremiah’s lament is Omran’s lament, “My joy is gone, grief is upon me, my heart is sick.” (Jeremiah 8:18) I would also say that sometimes it is our lament.

In the midst of such sorrow, we may well find ourselves asking the question that Jeremiah asked, “Is there no balm” - no soothing ointment from the trees – “in Gilead?” (Jeremiah 8:22) Some scholars contend that Jeremiah was asking a rhetorical question and that the intent would be for us to understand that “Yes, there is a balm in Gilead to heal our hearts, souls, minds and bodies.”

But that does not preclude us from doing what we can to ease the suffering we see in our world whatever the cause for such suffering may be. In 1989 the United Nations Convention on the Rights of the Child became the most widely ratified treaty on human rights in the world. The plight of Omran and thousands of other children has become a global concern.

UNICEF reported in June of this year that 9 out of 10 refugee or migrant children arriving in Europe from North Africa were unaccompanied. Thousands of children have been recruited as soldiers in South Sudan, Yemen, Afghanistan, Iraq and Syria. Last year the Syrian Observatory for Human Rights reported over 1,100 children under age 16 were part of ISIS forces.

It was said that when Omran was rescued, he wrapped his arms around his rescuer’s shoulder with “unexpected stillness. Amid the clamor of the rescuers, he [sat] calmly where the rescuers put him, and there he [remained] looking at the camera in a blank, yet telling, expression on his face.” (“Omran Daqneesh the Syrian Boy Who Made the World Cry,” Ezzoubeir Jabrane, Morocco World News, August 18, 2016)

“There he [sat]. Dust and blood [overlay] his face as he (stared) blankly at the camera. The boy’s tiny hands lay balanced on his lap. Calmly, he [wiped] the blood that [obscured] his vision and [ran] his hand through his hair. He then [looked] at his hands and the sight of the blood wiped out from his face [did] not disrupt the tranquility of his temperament.” (Op. cit.)

He did not move, speak or cry. While one journalist saw tranquility, one of the attending physicians at the hospital eventually attributed Omran’s behavior to fear or pain from the wound he had suffered. In the end the doctor simply said, “He was in shock . . . he was traumatized.”

There was no balm for Omran. Yes, the physicians attended to his injuries but the scars within him will never go away. Another physician said, “He was discharged [after two hours] because we can only treat the medical conditions. We didn’t have any(one) to treat the shock.”

A nurse who treated him on the night of the airstrike said, “He was in terrible condition of course after the destruction of their house. They are now living in a small house that is very humble and tight. I bought several toys [during a recent visit] – a small pony that Omran rode on, a small doggy and also a train and a car, and several other small toys [to share with his other brother and sister].”

Beneath the smile, I imagine Omran may well conclude as did Jeremiah, “For the hurt of my poor people, I am hurt, I mourn, and dismay has taken hold of me.” In the midst of such sorrow, it may be that all we can do is sit with Omran and weep with him as God weeps with him.