JPMorgan Chase & Company will pay $920 million in fines and has admitted that it failed to oversee trading that led to a $6 billion loss and renewed worries about serious risk-taking by major banks. (The Maui News, Money Matters: JPMorgan admits fault in a $6B trading loss, set to pay $920M, Friday, September 20, 2013, C10) Regulators in the United States and in the United Kingdom said on Thursday that the weak oversight by the largest U.S. bank allowed traders in its London office in 2012 to assign inflated values to transactions and cover up huge losses as they ballooned.

Two of the traders are facing criminal charges of falsifying records to hide the losses. The Securities and Exchange Commission or SEC said the breakdown in supervision stretched beyond the trading operations to the banks’ top executives.

George Canellos, co-director of the SEC’s enforcement division said, “JPMorgan’s senior management broke a cardinal rule of corporate governance: inform your board of directors of matters that call into question the truth of what the company is disclosing to investors.” (Op. cit.)

In some ways it would appear that our reading of The Parable of the Dishonest Manager in The Gospel According to Luke could not be more timely. Like the two traders at the London offices of JPMorgan, the parable tells us of a dishonest manager who is caught squandering the property of a rich man for whom he is working. 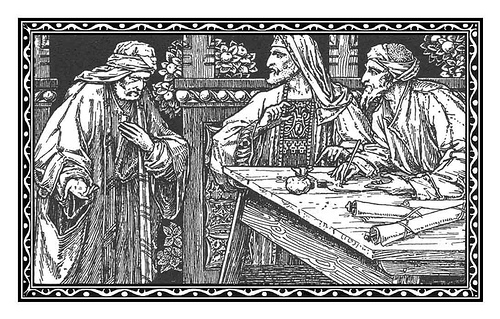 Aware that he will soon lose his job, the manager seeks out those indebted to the rich man and calls on two of them to reduce their billing. The rich man appears to let the manager off-the-hook by commending him for acting shrewdly. (Luke 16:8) It would appear that even Jesus seems to commend the manager for his actions.

Neither the rich man in the parable nor Jesus have any interest in condemning the dishonest manager for his shrewdness. After all, the manager was astute enough, smart enough, sharp enough to determine that he needed to look out for himself. Biblical scholars point out that the focus of the story is not on the dishonest manager or on any intention Jesus may have had in bringing criminal charges against him.

If that is the case, then what is the lesson of the parable? Verse 9 suggests that we are to handle our possessions so as to gain, not lose, our eternal home. (Preaching Through the Christian Year – C, Craddock, Hayes, Holladay & Tucker, Trinity Press International, Harrisburg, Pennsylvania, 1994, page 415)

I had an opportunity late in the week to attend a reception in Honolulu for Donald Hart, President of the United Church Funds based in New York. With him was Kathryn McCloskey, the Director for Social Responsibility.

For over a century, United Church Funds has offered a family of investment funds for the United Church of Christ that are professionally managed, well-diversified, and socially responsible. The funds provide competitive returns for church endowments and other long-term investments.

Hart pointed out that investments are a way that the church can increase the value of its financial resources into the future. During our visit a concern was raised about investments and how the church could maintain its own integrity in light of the story of the dishonest manager and those who would do the same today.

I wondered if the church might not run the risk of being held captive to the desire of accumulating and possessing more and more wealth. I wondered if we would forget that the resources are meant to support the mission of the church “to share God’s aloha from generation to generation.” (‘Ōlelo Mikiona: Mission Statement of Keawalaʻi Congregational Church.)

McCloskey reminded us that by being a major investor, the United Church of Christ through the United Church Funds is able to send representatives to shareholders meetings and call for socially responsible investing. I appreciated their time with us and the work that they do.

For me the lesson of the dishonest manager becomes clear at the conclusion of the parable: “No slave can serve two masters; for a slave will either hate the one and love the other, or be devoted to the one and despise the other. You cannot serve God and wealth.” (Luke 16:13)

The lesson is critical one because in the end the work of United Church Funds is not about getting the most lucrative return on financial investments but about how our stewardship of all the resources God has provided will make possible the mission and ministry of the church.

Lest any of us suppose that the dishonest manager is praised for his shrewdness, the words of the prophet Amos offers us a clear word of caution: “Hear this, you that trample on the needy, and bring to ruin the poor of the land ... the Lord has sworn: ‘Surely I will never forget any of (your) deeds. Shall not the land tremble on this account ... ’” (Amos 8:8)

The title of this morning’s message is the Hawaiian word momona. It’s most popular translation is “fat.” But it also refers to that which is fertile or rich in reference to the soil of the earth. For me, it also means “abundance.” God provides all of the resources we need to do the work of the mission of the church. It is God who raises the poor and lifts the needy through the abundance we share with others.