"Live Life in a Manner Worthy of the Gospel"

I have said this of many others but it could not be more true of Kumu hula Uluwehi Guerrero. He is a good and very dear friend of our church. Through his love of Hawaiian oli, mele and hula – chants, songs and dances – Uluwehi is a man with a generous heart. 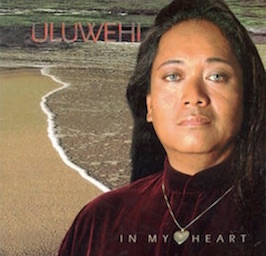 In the liner notes of his compact disk, “In My Heart,” Uluwehi writes: “Each day is a new experience and lesson whereby all things are embraced with prayer, hope, compassion and love. I acknowledge my journey in the path of life is a gift from God.”

Like other Hawaiian musicians and singers, Uluwehi’s love of Hawaiian music does not preclude him from celebrating music in any language. “Testify to Love” is the closing track on the compact disk. It was recorded by the contemporary Christian group Avalon almost a decade ago. The lyrics bear repeating. The first verse reads:


And the second verse:

From the mountains to the valleys
From the rivers to the sea
Every hand that reaches out, every
Hand that reaches out to offer peace
Every simple act of mercy
Every step to kingdom come
All the hope in every heart
Will speak what love has done.


And then the chorus once again with the now familiar refrain:

For as long as I shall live I will testify to love.

Although the song has been around for quite some time now, I do not remember hearing it until Uluwehi sang it in one of his concerts at the Maui Arts & Cultural Center and at our annual lūʻau several years ago. Country Western singer Winona Judd and others have recorded the song, but it never caught my ear or attention until I heard it sung by Uluwehi.

Such lyrics about love may seem a little “Kumbayah” for some. Some may protest that it sounds a bit warm and fuzzy. It feels safe. Who wouldn’t want love that brings hope and peace?

It was over a week ago that the Mother of All Rallies was held in Washington D.C. A supporter of the President speaking from the stage invited Hawk Newsome, who represents Black Lives Matter of Greater New York, to speak. “We’re going to give you two minutes of our platform to put your message out,” he said. “Whether they disagree or agree with your message is irrelevant. It’s the fact you have a right to have the message.”

“It was the last thing I expected,” Newsome said.

“We’re on the verge of a civil war. At some point, we’re going to have to talk to the other side and realize sometimes the situation calls for words, for love, for compassion, as opposed to words of anger and fists of fury.”

Newsome said that when he took to the stage and started shouting his beliefs, he found that some in the crowd were listening. It was then that the word popped into his head: love – not what I would call smarmy, ingratiating, insincere love but love.

In his letter to the church in Corinth, the Apostle Paul wrote about the kind of love with which we are to love. In chapter 13, he writes: “Love is patient and kind; it is not jealous or boastful; arrogant or rude; it does not rejoice in wrongdoing but rejoices in the truth. Love bears all things, believes all things, hopes all things, endures all things.” (1 Corinthians 13:4-7)

How then will we be able love with such love? In another letter, this time to the church in Galatia Paul writes: “It is no longer I who live, but it is Christ who lives in me. And the life I now in the flesh I live by faith in the Son of God, who loved me and gave himself for me.” (Galatians 2:20)

We lay claim to Paul’s declaration for ourselves and in doing so we seek to be obedient to the command to love God and to love others as ourselves.

At the close of rally in Washington D.C., Newsome went on to say, “As Christians, as concerned people, we care about everyone. The reason we march in the street is because we love people. We fight for people.”

He concluded his speech by saying, “If we really want to make America great, we do it together.” (The-CNN-Wire, 2017 Cable News Network, Inc.) The response reported by CNN was simple, “the crowd went wild.”

It is no surprise that there are those on all sides of the political spectrum who were unhappy with what he said. But it’s becoming clearer and clearer that it will be the testimony of folks like Newsome and others along the broad political, religious, social and economic spectrum of the nation or any nation that will make the difference.

Perhaps his words will be a source of encouragement and hope for Minnijean Brown Trickey. Ms. Trickey was among six other survivors who gathered this weekend to commemorate the anniversary of the desegregation of Central High School in Little Rock, Arkansas.

It was during the month of September 1957, 60 years ago, that nine black students faced an angry mob when they integrated the all-white high school in Little Rock. The “Little Rock Nine”, as they became known to the rest of the nation, were escorted by federal troops into Central High School. Ms. Trickey remembers the insults that were hurled at them.

When she saw images unfold from the deadly white supremacist rally earlier this summer in Charlottesville, Virginia she immediately thought about what had happened that day in Little Rock. “This is 60 years later,” she said. “I can’t believe this happened in this time.”

What do we say to Mr. Newsome and Ms. Trickey in light of recent events across the country? Our reading from The Letter of Paul to the Philippians provides us with a choice we are called to make.

In his prayer to those in the early church in Philippi, Paul makes clear the content of his prayer: “that the Philippians love for one another abound more and more and especially in that knowledge that helps them distinguish what is right and so makes them pure and blameless on the day of Christ that will redound to the glory and praise of God.” (Harper’s Bible Commentary, James L. Mays, Editor, Harper & Row Publishers, San Francisco, 1988, pages 1220-1221; Philippians 1:9-11)

Paul writes his letter from prison. He is facing capital charges so the issues of life and death before him. In the midst of his own circumstances, he instructs those who are in the church to rejoice amid their own circumstances, no matter how difficult they may be. (Feasting on the Word, Year A, Volume 1, Bartlett & Brown, John Knox/Westminster Press, Louisville, Kentucky, 2011, page 86)

Gilberto Collazo, President of Hope Partnership for Missional Transformation with the Christian Church (Disciples of Christ) admits that “many opinions exist about the purpose of the letter,” but Collazo suggests “that Paul is challenging people to find joy and hope in the difficult moments of life.” (Op. cit.) He goes on to say, “Paul speaks of the struggle of wanting to embrace death, which would allow him to be in the presence of Christ, and to stay in life, which would allow him to continue to witness to the power of the resurrected One. He chooses life.” (Op. cit.)

That challenge of finding joy and hope in the midst of sorrow and despair in our own personal lives and in the world is Paul’s word to us today. In the midst of whatever we are living through, Paul invites us to choose life and in choosing life to testify, to speak to what love can do, to speak to what love has done and thereby live our lives in a manner worthy of the gospel of Jesus Christ.

Janna Long of the group Avalon recalls on the liner notes of their compact disk (Wow #1 Hits), “‘Testify to Love’ is one of those songs an artist hopes to find on every project, but rarely, does. I remember the moment like it was yesterday when I heard the song in a meeting with Avalon back in 1997. We liked it but I don’t think any of us had an idea of how it would go on to touch people the way it has.”

“The message of ‘Testify’ is one every Christian can relate to. Being a witness of Jesus Christ in every part of our lives is a challenge for all and one that requires action on our part. Sometimes that is being very vocal about our faith and other times, it is simply demonstrating Christ in the small, silent ways, day in and day out” whether you are standing or on your knees. (Testify to Love by Avalon Songfacts, Google)

In the same way that it was no surprise there were those along the broad political spectrum who were unhappy with Newsome’s testimony of love, there are also those along the broad Christian spectrum who are unhappy with the group Avalon. Despite the naysayers, Paul’s confession is our confession: to him and to us “living is Christ.” (Philippians 1:21) We choose life and for as long as we shall live, we will testify to love.