In the Kumulipo, a Hawaiian creation chant, there is a mele or section of the chant which contains the following: 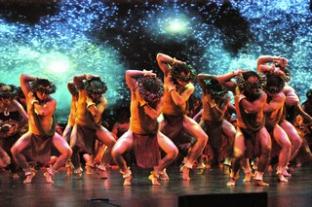 Within the cosmology of ancient Hawaiʻi, Kāne was one of many gods to be “found not only in the heavens but also in the plants, birds, fish, rocks and everything in nature, a god for every need of man,” (sic) (Nā Pule Kahiko: Ancient Hawaiian Prayers, June Gutmani, Editions Limited, Honolulu, Hawaiʻi, 1983, page 3) In the mele, we become aware of the significance of water in the life of our Hawaiian kūpuna or ancestors.

It is said Kāne came to Hawaiʻi with Kanaloa, a traveling companion, on the surface of the ocean from Kahiki or Tahiti. They landed here on Maui at Keʻei and began exploring the island. Wherever they went they celebrated the pleasures of life with ‘awa, a drink made from the root of the ʻawa plant.

At each stop, they left behind them many springs which were brought into being when Kāne struck an outcropping of rocks with his kauila or wooden staff. They used the water which gushed forth for mixing the ‘awa they carried with them and before moving on they would plant ‘awa around the new springs. In time, Kāne became the patron of fresh water and Kanaloa the patron of the ocean, especially the deep ocean. (Op. cit., page 5)

From the earliest of times, the fresh water from the waterfalls, streams and rivers of Hawaiʻi were among the most important natural resource for our kūpuna. The fresh water was called wai, and it was considered sacred.

Those who used water from the streams took only what was necessary. They were expected to share the water with others. This was to be done without greed or selfishness. (Cultural Importance: Native Hawaiians and Streams, William Puleloa, Division of Aquatic Resources, State of Hawaiʻi)

It was out of such practices that some say the Hawaiian word kānāwai was used for the word “law” and for some it came to mean an “equal sharing of water.” Others like the late Hawaiian scholar Mary Kawena Pukui dispute that definition. “Since some early laws concerned water,” she writes, “some have suggested that the word kānāwai is derived from wai, water. This seems doubtful in view of the many ancient edicts of the gods that have no relation to water.”

Whatever the case may be, Pukui provides us with an interesting a side note about Kāne. “Perhaps the most famous kānāwai is the kānāwai kaiʻokia promulgated by the god Kāne after the flood of Kahinaliʻi, promising that ever afterwards the sea would be separated (ʻokia) from the land.” (Hawaiian Dictionary, Mary Kawena Pukui & Samuel H. Elbert, University of Hawaii Press, Honolulu, 1986, page 127)

Water was of such great value that the word wai was used to indicate “wealth.” So to signify abundance and prosperity, our kūpuna would say waiwai.

It is a word that appears in The Gospel According to Matthew in reference to Jesus’ encounter with the rich young ruler. “It is easier,” Jesus said, “for a camel to go through the eye of a needle than for a kanaka waiwai to enter the kingdom of God.” (Matthew 19:24)

It is a word that also appears in a very familiar and popular hīmeni entitled “Iesū Me Ke Kanaka Waiwai: Jesus and the Rich Young Ruler”. It is number 115 in our Hawaiian language hymnal, Nā Hīmeni O Ka ʻEkalesia.

Water was critical for life in ancient Hawaiʻi and it was critical for life in ancient Palestine. For the ancient Egyptians and Mesopotamians, water was the primary element from which all life emerged. (Harper’s Bible Dictionary, Paul J. Achtemier, General Editor, Harper & Row Publishers San Francisco, 1985, page 1121) The creation stories that are recorded in The Book of Genesis reflect this view and there are Biblical scholars who tell us that they are based, I part, on ancient Canaanite and Babylonian myths.

The stories also refer to the ocean as being divided at creation into upper and lower waters. The waters above were the source of rain while the waters below formed the seas and lakes. For the Babylonians one was identified with wisdom, fertility and life while the other was identified with chaos and destructive power.

Both elements appear in our readings this morning. On the one hand, there is the destruction of the great flood during the time of Noah and on the other, the promise of a new heaven and a new earth that is yet to come that will bound by “the river of the water of life.” (Revelation 22:1)

In our reading from The Book of Genesis, Noah is back on dry land again following the great flood. He builds an altar and makes an offering to God. God is pleased and promises never again to destroy the earth in this way. The rainbow is given as a sign of this covenant. It is a promise made to Noah and to all succeeding generations.

Throughout the month of September we have looked at the impact of creation on our lives and the impact our lives have on creation – from trees to the land to the wilderness – and now water. We may find comfort in knowing that it is not God’s intention to destroy the earth again by water but what are we to say of our impact on creation as sea levels rise and the climate continues to change?

Is the “river of the water of life” only possible in the new heaven and earth? Are the 12 crops of fruit and the leaves from their trees for the healing of all nations only possible in the new Jerusalem? Are we to resign ourselves to apocalyptic view of the writer of The Book of Revelation and say that this vision of renewal is only possible then? Or is it possible that by being stewards and caretakers of all that God has created that we will be able to see a glimpse of “the river of the water of life.”

As the rains come to us once again during this Makahiki season, we are aware that it is God’s Spirit that renews all of creation. Some may view the ongoing legal battles over water rights in Hawaiʻi today, especially here on Maui, as a battle pitting once-powerful sugar plantations against farmers and environmentalists. But for many it is about much, much more. 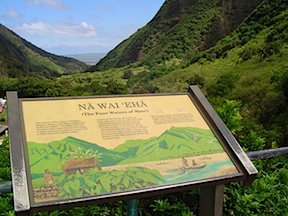 Over the last two decades the kānāwai or law has been clarified following the closure of the Oʻahu Sugar Company and the Wailuku Sugar Company. Before the waters from ʻĪao river and from the streams at Waikapū, Waiheʻe and Waiʻehu were diverted to plains of Central Maui for the sugar plantation, there was an abundance of life from the mountain to the sea.

But when the waters were diverted, the stream beds were left dry and the life of the land all but disappeared. In a wide-ranging conversation about Native Hawaiian traditional and customary rights, Hōkūlani Holt, Cultural Programs Director at the Maui Arts & Cultural Center, reflected upon a perspective that gets lost in the legal battles and reminds us why the restoration of the water to the streams is important for the farmers and for those who see themselves as stewards of the land.

Some know her as kumu hula or a teacher of hula, others call her ‘anakē or auntie. She pointed out if Hawaiians can thrive in whatever way they can do that - whether it is working the taro loʻi, reconstructing the fish ponds, speaking the language, learning hula, or restoring the streams - it’s best for all of us.

Water was of such great value that the word wai is used to indicate “wealth.” It touched every aspect of life. For some that value is measured in money. But for our kūpuna – Hebrew and Hawaiian – it was and is about how God can renew the face of the ground – the face of all creation.

The prophet Jeremiah declared that God is the ‘fountain of living waters’ for Israel (Jeremiah 2:13). Jesus offered the water of eternal life to the Samaritan woman at the well (John 4:11-15). Amos called for justice ‘to roll down like waters’ of a perennial stream (Amos 5:24). Salvation was experienced by being drawn up from the waters of death (Psalm 18:16).” (Op. cit.) And on a day such as this, baptism recalls this symbolism of salvation as well as cleansing; those ‘born of water’ (John 3:5) are likened to those whom God saved through the great flood of Noah’s time. (1 Peter 3:20; 1 Corinthians 10:1-5).

Above, the flight of birds. Below, the flowers of the earth. In the uplands, the trees of the forest. In the sea, the fish of the sea. Come and see how beautiful the world.