It was around year 50 CE that the Apostle Paul, accompanied by Silas and Timothy, found his way back to the city of Philippi in what was known as Macedonia. It was through Lydia, a merchant of purple cloth, that the church was established in Philippi.

A lengthy and close relationship developed between Paul and what was then a fledgling young church. (Harper’s Bible Commentary, James L. Mays, Editor, Harper & Row Publishers, San Francisco, 1988, page 1120) “It had existed long enough to endear itself to Paul because of its continued support of his . . . work.” (Preaching Through the Christian Year A, Craddock, Hayes, Holladay & Tucker, Trinity Press International, Harrisburg, Pennsylvania, 1992, pages 455-456)

Over time those in the congregation began to face what we face in all of our congregations: “internal dissent and external threat.” (Ibid., page 456) Our reading this morning focuses on the former – the “internal dissent” or what our kūpuna or elders would call the hakakā or the kind of fighting or quarreling that causes strife.

For now, Paul is calling attention an apparent conflict between Euodia and Syntyche which threatens to undermine the unity of the church. What worries Paul about the conflict between the two women worries him about the whole congregation and so he makes an appeal to both of them with words that demonstrate his deep affection for them and for the church in Philippi.

Biblical scholars point out that if Paul doubted for a minute that there was any encouragement in Christ, any consolation in love, and sharing in the Spirit he would have used a different Greek word for “if.” The word he does use translates more directly in this way – not “if” but “since there is encouragement in Christ, since there is consolation from love, since there is fellowship in the Spirit . . . make my joy complete. Do nothing from selfish ambition or conceit, but in humility regard others as better than yourselves. Let each of you look not to your own interests, but to the interest of others.” (Philippians 2:1-4)

But the appeal Paul makes to Euodia and Syntyche and to us in our churches is more easily said than done. The thought of regarding others as better than ourselves is what often leads to the hakakā – the quarreling, the disagreements. For Paul to even demand such compassionate behavior almost seems laughable.

Though we are wont to admit it, we will put up with each other and that seems to be as good as it will get. All this talk about compassion and sympathy, love and humility is nice but we are not about to give up our resentments or hurt, pain and anger when we feel we have been slighted by a comment, a look or a whisper.

Paul demands too much of Euodia and Syntyche. He demands too much of us. But if we are to consider others as better than ourselves; if we are to think of the interests of others before we think of our own interests, Paul makes clear that it can only be done if we have the same mind in us that was in Christ Jesus. (Philippians 2:5) Jesus emptied himself and became a servant – not a king or an emperor; not a dictator or supreme leader, not a prime minister or president – but a servant. He humbled himself and became obedient to a life of service, even to the point of death.

Paul’s hope is that we will come to understand that because of Jesus, others see our behavior as conforming to the example he set and that others will see our behavior as being transformed by the presence of God in our lives. (Preaching Through the Christian Year A, Craddock, Hayes, Holladay & Tucker, Trinity Press International, Harrisburg, Pennsylvania, 1992, page 457)

Paul’s vision of unity and harmony within the church is a challenge we face. It is also a challenge we face in the world – which bring me back to the application of Paul’s appeal to the external threats we face from those who seek and to sow division and chaos.

On this World Communion Sunday, we hold in our thoughts and prayers the people of Puerto Rico and the U.S. Virgin Islands and other nations of the Caribbean in the aftermath of three hurricanes. As we gather to share in the eating of the bread and the drinking of the cup, we are mindful that amid the devastation of their own lives, our brothers and sisters Puerto Rico and many other places around the world are doing the same. 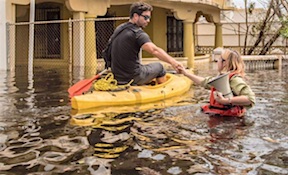 Hurricane Maria swept across Puerto Rico as a Category 4 storm with winds of 155 mph. The damage was catastrophic; some would even say apocalyptic.

For some of us here in Hawaiʻi the bond with Puerto Rico has deep historical and social ties. The first migration of Puerto Ricans to our islands began when their sugar industry collapsed following Hurricane San Ciriaco in 1899 . The hurricane devastated the island and caused a worldwide shortage in sugar and a huge demand for sugar from Hawaiʻi.

By the end of 1901, approximately 5,000 Puerto Ricans moved to Hawaiʻi. Over time many became family to Native Hawaiians and other immigrants through marriage.

Today, over 35,000 residents of Hawaʻi are of Puerto Rican descent. We are both island communities and at one time we were both U.S. territories.

After World War II, the island of Kahoʻolawe, across the channel from us here in Mākena and the island of Vieques in Puerto Rico were used by the U.S. as bombing targets for military training. It was only in recent years that the bombing with live munitions on both islands were finally halted and the islands returned to the State of Hawai‘i and the Commonwealth of Puerto Rico.

While we may be separated by an ocean and a continent, we care very deeply about the 3.4 million people of Puerto Rico, not only because they are Americans but because they are family to us. Despite what some are prone to call “fake news” or “alternative facts,” the crisis in Puerto Rico at this very moment is a humanitarian crisis.

If the words of the Apostle Paul have any value for us today in our response to the crisis in Puerto Rico, it is this: We do nothing from selfish ambition or conceit, but in humility regard others as better than ourselves. We look not to our own interests, but to the interest of others for this is the mind that was in Christ Jesus.

Jesus did not regard equality with God as something to be exploited, but emptied himself. We ought to do the same. We must empty ourselves and become servant leaders in the service of others, especially to the least of those who are among us.

We see such servant leaders today in the men, women and children in communities across Puerto Rico who, despite the catastrophic destruction left in the wake of Hurricane Maria, are not simply waiting to be rescued. We see men and women clearing fallen trees to open up roads.

We see neighbors helping neighbors. We see others sharing what little resources they have, food and water, with each other. We see children sweeping away debris with palm branches.

We see in them and in the people of U.S. Virgin Islands, Florida and Texas and the other island nations of Caribbean what we have always known –that such compassion and sympathy, such aloha and sharing is what makes any nation great.

We do nothing from selfish ambition or conceit but rather look to the interests (and needs) of others and not simply to our own. We expect that of ourselves and we expect that of those who are in positions of leadership.