I spent the first twelve years of my life growing up in Kona on the island of Hawaiʻi in what we called “coffee land houses” or depending on the condition of the houses, we would sometimes call them “coffee shacks.” But there was nothing pejorative about living in a coffee shack. 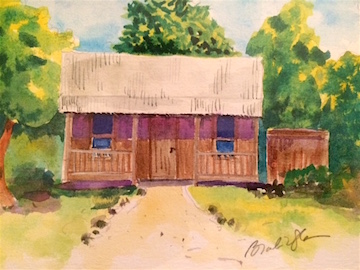 Post and pier construction was the technique used to build the foundation of the houses in which we lived. (www.wisegeek.org) They were built quickly and cheaply. Single walls. No paint. There were times when we had to rely on kerosene lamps and stoves when there was no electricity. (Ed.: the illustration here is a painting of Kahu's childhood home in Kona.)

There was no plumbing to speak of except a pipe leading from what we call a water tank into a kitchen sink. A used white cloth Bull Durham bag was tied to the faucet to trap anyway wayward bugs, leaves or other unforeseen creatures small enough to make their way through the pipe.

I still remember living in such houses in Keauhou, Kainaliu, and Captain Cook. Whenever I find myself back in Kona, I always return to the house in Keauhou where I spent most of my life in as a child.

It was a tiny house long before there was a “tiny house movement.” My late uncle moved into the house after he retired. By then the rest of the family had moved away. He was able to upgrade the plumbing to include an indoor toilet and for a time the house was his home.

After his death several years ago, the house was abandoned and it fell into disrepair. On my last visit to Kona, I stopped by and took a photograph of what remained of the house.

The front door and the windows on either side were boarded up. I walked down to one side of the house and noticed that a door was gone. The house was empty. The screens along a makai wall were all torn. Vines and other vegetation had found their way through cracks and crevices in the floor and walls of the house.

I paused for a moment to listen to the wind whispering in the open spaces of the house. I could hear the echo of voices from long ago years reminding us it was time to go to school or to decorate the Christmas tree each year in early December. We had electricity and at one point tūtū bought a black and white television set and the Ed Sullivan Show became a must-see on Sunday nights.

I was there along with other family members at tūtū’s bedside when he died.

Yes, it was a house built on a post and pier construction. But more than anything it was built on the collective memories of my family. It was more than a coffee land house. It was home.

The years have come and gone. We have all moved on. But every now and then I feel a “longing for home.”

It may be that that desire is a longing to look out the window of the bedroom where I slept sharing a bed every night with my cousins. It may be a desire to hear the voices of family who are no longer with us.

My longing for home is not out of any despair but out of a love for what once was. It is a longing of a love we share with others whenever we think about home.

But we know that for some the longing for home can be profoundly different. That is very clear in our reading from The Book of Lamentations this morning.

Beth Tanner is an Old Testament Scholar. She writes: “ . . . Lamentations is an ancient rendition of a great loss. It puts into poetic form the sorrow of the loss of the temple and much of Jerusalem during the Babylonian destruction in 538 BCE. It is a testament to the pain and devastation of war . . . ” (Feasting on the Word: Year C, Volume 4, Bartlett & Taylor, Westminster/John Knox Press, Louisville, Kentucky, 2010, page 129)

Today is World Communion Sunday. Tanner wonders who would dare turn to a Biblical text that is “uncomfortable and speaks of despair, sin, war, and death.” Who would want to even consider the depths of war and violence around the world – in Syria, Afghanistan, Yemen, Nigeria, and Iraq - while celebrating the peace we hope for around the table of the Lord? (Op. cit.)

The poet questions what is seen as the abusive actions of God through the destruction of Jerusalem, yet trusts in God’s steadfast love and mercy. How can that be?

Somehow, in spite of everything, the poet affirms that God’s steadfast love and mercy always triumphs over judgment and punishment. The poem moves toward the affirmation of faith in God’s grace and mercy and in a God who hears our prayers. In the midst of pain and suffering, there is hope. (Preaching Through the Christian Year, Year C, Craddock, Hayes, Holladay & Tucker, Trinity Press International, Harrisburg, Pennsylvania, 1994, page 204) That is good news indeed.

A few weeks ago Judy Fox, the Chairperson of our Board of Mission & Outreach, clipped an article out of The Maui News. The article reported that over 28 million children around the world have been uprooted from their homes because of war and violence.

Based on our reading this morning, it would be difficult for us to conclude that 28 million children are being punished for any unnamed sins. It may be that there are Christians who will be quick to make that judgment that those who suffer must have brought it upon themselves. I am not one of them.

The central element in our reading this morning is a prayer, “a request that God help the one in trouble.” But the prayer also contains “complaints about the suffering and about God’s failure to help or God’s absence, as well as confessions of sin or of innocence.” (Ibid.)

We are reminded that we would not be the first to complain about God’s failure to help or God’s absence in the face of horrific suffering. Yet even in the midst of such suffering and pain, there is hope because of God’s steadfast love and God’s mercy which have no end. (Exodus 34:6; Psalm 86:15, 103:8)

Like the psalmist, the poet of Lamentations affirms that God will hear our prayers and will act. (Psalm 6:8-10) However, any expectation of an instantaneous response or answer to our prayers is tempered with the reassurance: “It is good one should wait quietly . . . ”

Home may be a car or a tiny house. Home may be on the beach or under a freeway. Home may be in a refugee camp or on the sidewalk of a city street.

As we look about our world and as we look at our own lives, we may be inclined to think of home as a house or a place or a memory. But home will always be where there is hope – hope in the God whose steadfast love and mercy never ends; hope in the God who in Jesus Christ seeks to welcome us to this table and in doing so, to welcome all of us home. Amen.