It happened over many years ago. A Sunday School teacher was faced with the daunting task of teaching a room full of what I was told were more than a few unruly keiki one Sunday morning.

Frustrated by the experience, the teacher was determined to come up with a set of rules that would govern the behavior of the children in the classroom. When they were presented to the children the following week, I imagine what they heard caused more than a bit of fear and trembling.

Perhaps, not coincidentally, there were ten rules. When I heard about the story, I felt it provided an opportunity for us to share with our own keiki the importance and value of the rules. 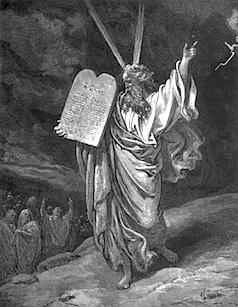 It was a challenge for me because of our all too familiar knowledge of our reading from The Book of Exodus on the Ten Commandments. I suppose an angry and frustrated Sunday School teacher would find great comfort in the declaration made to Moses: “ . . . I the Lord your God am a jealous God; punishing children for the iniquity of parents, to the third and the fourth generation of those who reject me.” (Genesis 20:5)

But the Ten Commandments were not intended as punishment but “a way of life to guide the people of Israel along their journey to becoming the nation that was promised to Abraham.” (Seasons of the Spirit, Seasons/FUSION, Season of Creation, Pentecost 2014, Wood Lake Publishing, Inc., 2013, page 82) The story of Moses and the Ten Commandment establishes the power and position of his leadership and, in turn, God’s leadership.

After the escape from Egypt, where they had lived as slaves, the people are guided by a pillar of cloud by day and a pillar of fire by night. They cross the Sea of Reeds after the miraculous parting of the waters. When they had no water, Moses is instructed by God to strike a rock with his staff to produce a flow of water.

While the word is never used in the Bible, the people are not unlike the more than 30 million refugees who have escaped over 40 war-torn areas around the world today. We can well imagine how difficult their journey was across a desert wilderness. Who among us would not complain about not having enough water to drink or food to eat?

For those who were in the wilderness for forty years there were no non-governmental organizations nearby to provide humanitarian aid. There were no trucks or airlifts of water and rations.

Amid the chaos, God spoke to Moses and offers a number of standards for acceptable behavior for the people. As Moses speaks, there is thunder and lightning, the sound of a trumpet, and smoke rising from the mountain which the people perceive as coming from God.

With fear and trembling, they plead with Moses to be their mediator, and Moses agrees. Moses reassures them. “Do not be afraid.” The Ten Commandments were not meant as a punishment so much as a promise that God’s steadfast love would abound for those who love God and keep God’s commandments. (Genesis 20:6)

That is the message I found myself sharing with our keiki. It’s not enough to have rules that tell us what we cannot do when we come to church. So I suggested that we look at the rules and instead of saying what they could not do to say what they could do.

So instead of saying, “Do not take something that belongs to someone else.”

Instead of saying, “Do not shout or interrupt others who are speaking.”

Say. “Listen to others.”

Instead of saying “Do not push or shove others.”

Say, “Help someone by offering a helping hand.”

Dr. Kent M. Keith served as the student body president of Roosevelt High School in Honolulu in 1966. In 1968 he wrote a booklet for student leaders entitled, “The Paradoxical Commandments.”

His book, “Anyway: The Paradoxical Commandments” was published in April 2002 and became a national bestseller. Over the years he has given over a thousand presentations based on the paradoxical commandments and many focused on servant leadership.

In his most recent book, “Morality and Morale: A Business Tale,” published in 2012 he offers us what his version of a “universal moral code” which parallels some of what was spoken to Moses on Mt. Sinai generations ago. It is a code not unlike the joy that comes from knowing that all of what Moses and the prophets have said are some summed up in what Jesus said.

Let us pray: May we be people, O God, attentive to care; people who discern the spirit of the law of love that brings freedom to live and life for all. Let it be so. Amen.