Miya remembered the day the government officials came to their door. They were told they had two days to settle their affairs and that they would be taken to a relocation center, a euphemism that was used to describe the camps where Americans of Japanese ancestry were imprisoned two months after Japan bombed Pearl Harbor in December 1941.

The evacuation, as others called it, followed the signing of Executive Order 9066 by President Franklin D. Roosevelt. Of the more 120,000 who were “evacuated” nearly 70,000 or mover 60% were American citizens. Others were long-time residents having lived in the U.S. between 20 and 40 years. 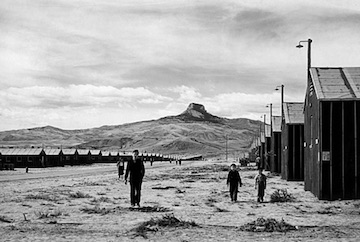 Despite their loyalty to the U.S., they were seen by others as a security threat. At Heart Mountain, Wyoming, one of ten camps located in seven states, the buildings in which 10,000 men, women and children were housed was surrounded by barbed-wire fences with soldiers perched atop towers with rifles.

By the end of the war it became clear that not a single act of espionage or sabotage was committed by those who were imprisoned. In the years after the war there were those who saw the relocation as essential – “for the good of the nation” – they would say. That the rights of American citizens who happened to be of Japanese ancestry had been denied was largely ignored.

I met Miya over 40 years ago. She spent the duration of the war at the camp in Heart Mountain, Wyoming. At the age of 25 I began painfully aware that the history books of my growing up years were basically devoid of any reference to the camps. It was Miya’s recollection of the day they were taken away that made me realize what happens when xenophobia – the fear of another human being because of their race or ethnicity – takes hold.

“What happened Miya?” I asked.

“Well, they came and told my mother and I that we had to evacuate,” she said. “I wasn’t sure what they meant. But my mother had heard from other families that soldiers were coming.

“When they returned a few days later, we were packed and ready to go. Trucks came by to pick us up along with neighbors and others we met for the first time.” “They drove us to a train station. As we waited, we were tagged with numbers.”

“What was it like,” I asked “being around so many others and not knowing where you were all going?” “

” she answered. “It almost seemed like an adventure. But,” she paused and then added, “I remember seeing the soldiers with rifles at the train station and when we finally boarded the train, the window shades were pulled down and we were told not to open them.”

“What else do you remember?”

“I think because we didn’t know where we were going, I could hear and see some of the people crying. My mother noticed that too and she made it clear to me that we were going to be strong. ‘Shigata ga nai,’ the Japanese would say, ‘It can’t be helped.’”

“Then she would add, ‘Ganbaru!’ We will do our best and get through this difficult time.

As Miya recalled her memories of that day, it became clear to me that she and her mother had been exiled along with tens of thousands of others to remote areas of the country. It may be that there were those who were convinced that the war would come to an end quickly.

Yet, as one year led the next there was some ambiguity about the future. That ambiguity is the dominant theme in our reading from The Book of Jeremiah.

Jeremiah was appointed a prophet when he was still a young boy around 627 BCE during the reign of Josiah. In his early years it has been speculated by some scholars that he belonged to a wider group of prophets.

Following the reign of Josiah, Jehoiakim assumed the throne and was faced with a Jeremiah who had become a mature man and prophet. Jeremiah’s stature continued to grow even more during Zedekiah’s reign which began in 597 BCE.

In that year, the city of Jerusalem fell to the Babylonians and the war with Judah came to an end. The first wave of exiles were soon deported from Judah to Babylon. (Harper’s Bible Dictionary, Paul Achtemeier, Harper & Row, Publishers, San Francisco, 1985, page 456)

Throughout his life, Jeremiah shared his visions and prophecies of judgment as well as personal laments. His words to the people were hardly reassuring.

The prophet Hananiah predicted that the exile would come to an end “within two years” (Jeremiah 28:3). But for Jeremiah it would take the passing of a generation before those who were exiled would return home to Judah.

He offered words of comfort and hope to those expecting a speedy return. He cautioned the people to “settle in for the long haul, and (to) be patient with respect to the timing of the return. God has promised that they will be returned to their land, so sit back and trust the promise.” (Feasting on the Word, Year C, Volume 4, Bartlett & Taylor, Westminster/John Knox Press, 2010, page 149)

In order to demonstrate their trust in God’s promise, Jeremiah calls upon the people to “build houses and live in them; plant gardens and eat what they produce. Take wives and have sons and daughters; take wives for your sons, and give your daughters in marriage; multiply there, and do not decrease.” (Jeremiah 29: 6) He adds, “Seek the welfare of the city where I have sent you into exile, and pray to the Lord on its behalf, for in its welfare you will find your welfare.” (Jeremiah 29:7)

While Miya and others lived in barracks and even converted horse stalls at a race track and did not have to their own houses to live in, we know that during their imprisonment, they planted gardens and ate what they produced. Some married and had their own children. Others welcomed the birth of grandchildren.

Schools and churches were established. There was time for sports and evening dances and movies. Life went on.

“Remarkably, Jeremiah’s letter is concerned not only with the life of the exiles; it also addresses the well-being of the ‘enemies’ among whom they live.” (Jeremiah 29:7) Having said that, it is equally remarkable to me despite the imprisonment of Americans of Japanese ancestry, many of the men who were taken to the camps demonstrated their loyalty to the country that had betrayed them by serving in 442nd Regimental Combat Team, the most decorated American combat unit of World War II.

As the war came to an end, the camps were closed. The Issei and Nisei – the first and second generation of Americans of Japanese ancestry – stepped out of the camps into an uncertain future.

The story of the Babylonian exile and the exile of Americans of Japanese ancestry strikes a particular chord in me because I was born to a mother who was Hawaiian-Portuguese and a father who was Japanese. My dad was among those who served in the 442nd Regimental Combat Team during the war.

It would not be until the Sansei or third generation that the actions taken by the government would be called into question regarding the camps. Through their perseverance, the U.S. government issued an apology and provided redress through monetary compensation for the survivors of the camps.

It would not be until 1976 that Executive Order 9066 was rescinded by President Gerald Ford. In August 1988 President Ronald Reagan signed the Civil Liberties Act. Four years later amendments to the act were signed into law by President George H.W. Bush. Another apology was made by President Bush on the occasion of the 50th anniversary of the bombing.

As a prophet Jeremiah found himself weighing heavily upon the people of Judah, pointing out that their exile came as a consequence of God’s judgment and punishment. One could not make the same claim for the exile of Americans of Japanese ancestry.

However, in the end whether we look at those who were exiled to Babylon or those who were exiled to the camps in Arizona, Arkansas, California, Colorado, Idaho, Utah and Wyoming, they were all people facing an uncertain future. Amid the uncertainty, the prophet Jeremiah offered words of hope and comfort to the people of Judah and an Issei mother offer words of hope and comfort to her Nisei daughter. Ganbaru!