“Ola: The Journey of Life”


On March 11, 2011 a magnitude 9.0 earthquake off the coast of Tōhoku, Japan generated tsunami waves that reached heights of up to 133 feet in Miyako in Tōhokuʻs Iwate Prefecture. The tsunami travelled six miles inland in the Sendai area and moved Honshu, the main island of Japan, 8 feet east and shifted the earth on its axis by estimates between 4 inches to 10 inches.

“We are in the north,” they said. “The tsunami affected the low lying areas of Aomori. But where we lived we were okay.” 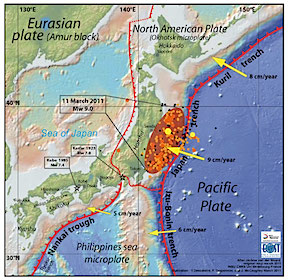 Over 15,000 people died across twenty prefectures; over 8,000 were reported injured or missing; over 4 million homes were left without electricity and 1.5 million more without water; 125,00 buildings collapsed and more than 1 million other structures were damaged.

As difficult as the days were following the disaster, there was the sense that life goes on.

Masako and Masanori made the decision to come to Maui 40 days after the most powerful earthquake hit Japan. During our visit it became evident that they were both still reeling from the disaster.

In the year that followed their daughter Emma was born. Three weeks ago I received a letter from Masako and Masanori with a photograph of Emma.

The letter also included an ultrasound image of their soon to-be-born son. Masako had written about a month earlier to ask about a name for her son. Despite what happened along the shoreline of Aomori after the earthquake, I suggested that since they were married here on Maui near the sea that Kai might be a name they would consider. Kai means “the sea.”

His eyes, ears, nose, and mouth were all clearly visible. It was a marvelous sight to see—an infant who would soon enter the world and begin his own journey through life.

A few days ago, I stopped by Roselani Place in Kahului to visit with Sue. A few weeks ago someone shared the good news that Sue had recently celebrated her birthday.

I recognized her as I made my way into the dining room where she was having lunch.

A caregiver was there to feed her, her lunch.

“Her hearing is not so good,” the caregiver said, “but she has a great appetite.” Even as we exchanged other pleasantries, Sue seemed oblivious to our conversation and more concerned about chewing her food.

“That’s amazing!” I said. “What is it about folks like Sue who live such long lives?” I asked.

Her caregiver answered, “I am not sure about Sue, but I did ask someone else what the secret was to living a long life and her reply was butter and vodka.”

Without attempting to verify Sue’s current diet, I was certain it was free of butter and vodka. I looked at Sue and found myself marveling at a kupuna or elder whose journey through life had already spanned a century and more.

Our reading from The Book of Exodus is about a people on a journey who were faced with new and unknown circumstances. In an earlier chapter of the book, we read that Moses receives Ten Commandments from God—commandments intended to give order, value and identity to the people of Israel.

The focus of our reading this morning is on the people who are still camped at Mount Sinai. Moses goes up on the mountain to receive “two tablets of the covenant” that contain the commandments that will guide and shape their journey through life. (Exodus 31:18)

He is gone for a very long time. In his absence, the people grow restless and turn to his brother Aaron saying, “Come make gods for us, who shall go before us; as for this Moses, the man who brought us up out of the land Egypt, we do not know what has become of him.” (Exodus 32:1)

You and I may want to berate the people for their lack of faith. But we cannot lose sight of the difficulties and challenges they had to face day in and day out for years. The people felt lost without Moses. It was difficult for them to face the hardships of life in the wilderness.

They looked upon Moses as the one who was the mediator between them and God. Without him, they turn to his brother Aaron seeking the assurance of God’s presence. Aaron’s response is to collect jewelry from the people and use it to create an image in the form of a calf. He supports the people by building an altar and announcing that a festival will be held.

To say that God is not happy would be an understatement. “They are a stiff-necked people,” God tells Moses.

Remarkably, we are told that God is prepared to punish the people. Moses intercedes on behalf their behalf and implores God to remember the promises made to Abraham and Sarah, Isaac and Ishmael. “Turn from your fierce wrath; change your mind, and do not bring disaster on your people.” (Exodus 32:12)

Even more remarkably, the Bible tells us, “And the Lord changed his (sic) mind about the disaster that he (sic) had planned to bring on his (sic) people.” (Exodus 32:14) The journey of life through the wilderness for 40 years is not unlike our own journey through life.

Like the people in the wilderness, we grow restless. We worry about our own journey and often even amid our the comfort of our own lives, we may feel like we are in the wilderness facing uncertain circumstances about work and school, about our health and our relationships.

We may pride ourselves in pointing out that we do not cast the image of a calf in gold. Yet for over 5,000 years we have been enticed by the allure of gold. It remains the international measure of wealth and if the truth be told we are no different than the people who brought their gold rings to Aaron.

The temptation to worship gold—whether in the image of a calf or in the form of a bullion—remains. We want to be economically secure.

As we go through the journey of life we would do well to remember the tablets Moses brought down from the mountain were made out of stone, not gold. If we are to be secure in our journey through life we may find greater comfort in reminding ourselves of the inscription that appears on the U.S. currency – “In God we trust.”

We would do well to remember that the Ten Commandments was meant to be “a way of life to guide the people of Israel along their journey to becoming the nation that was promised to Abraham.” (Seasons of the Spirit, Seasons/FUSION, Season of Creation, Pentecost 2014, Wood Lake Publishing, Inc., 2013, page 82)

After sharing my thoughts with you last Sunday about the significance of the Ten Commandments on our lives, I saw a sticker on the back of an SUV as I drove home to Wailuku. At first, I did not even see the sticker, but I did notice the SUV accelerate in the merging lane at the intersection of Kuʻihelani and Honoapiʻilani highways.

The driver was determined to get ahead of a line of cars in the left lane by passing everyone at over 60 miles an hour in a 30 mile-an-hour zone. I was in back of him when we reached the intersection at High Street and Main Street in Wailuku after all of the cars he had passed turned up and down other streets.

It was then that I saw the sticker. It read: “Gods10.com”. Below the address was the name “Jesus” and below Jesus’ name was the phrase, “If you keep my commandments . . . ” I am not sure if the driver realized the actual significance of the sticker. Yes, there are Ten Commandments. But for Jesus there really was only one – to love God and to love others as yourself.

Slowing down would have been the right thing to do.

Sometimes we need to slow down.