Luxury real estate developer Nile Niami set out to build the most extravagant home in the U.S. The giga-mansion dubbed “The One” is a 105,000 square foot estate located in the Bel Air neighborhood of Los Angeles, California. 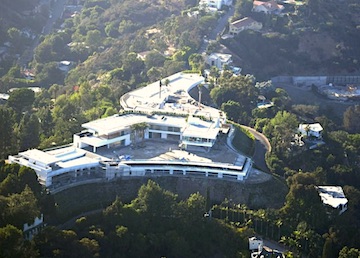 Construction began in 2013. When completed the opulent structure will feature - aside from multiple bedrooms and baths a bowling alley - a 40-seat movie theater; an indoor/outdoor nightclub, a jellyfish room where tanks of jellyfish replace the walls, illuminated by black lights; and four infinity pools providing the illusion that the structure is floating on water. The price tag: $500 million.

The construction of the home “underscores a new gilded age in the U.S. and especially LA. Tech tycoons and other plutocrats are splashing fortunes for homes breaking records for scale, opulence and excess” (The Guardian, Roy Carroll, Sunday, March 4, 2018). The excesses come amid a housing shortage that has left over 57,000 people without permanent shelter in LA county.

We see in LA what we see Honolulu – tents on sidewalks, people sleeping in cars, doorways and on the beach. “The Los Angeles Times columnist Steve Lopez compared the city’s hilltop mansions to giant tombstones marking the ‘death of humility’” (Op. cit.).

We would be generous to say that at 50 years of age Niami is a young man. But his audacity and success in accumulating wealth brings to mind the “rich young ruler” who approaches Jesus one day and asks “What must I do to inherit eternal life?”

The man is not identified by Mark as “a rich young ruler.” But our identification of him, as such, is possible only by borrowing “young” from a similar account found in The Gospel According to Matthew (Matthew 19:20) and “ruler” from a parallel story found in The Gospel According to Luke (Luke 18:18) (Preaching Through the Christian Year B, Craddock, Hayes, Holladay & Tucker, Trinity International Press, Harrisburg, Pennsylvania, 1993, page 440).

Our reading from The Gospel According to Mark may give us cause to assume that Jesus would be inclined to attack the “rich young ruler” for his wealth. But in verse 21, we read “Jesus, looking at him, loved him.”

Jesus loved him and invites him to live a life of discipleshim. He instructs him to go and sell what he owns and then to give the money to the poor. There is no attack here on the wealthy or any praise of poverty (Ibid., page 441).

Jesus’ invitation comes as a shock for the man because he had many possessions. He is unable to do as Jesus instructs him to do and he goes away grieving.

In her own reflections of our reading from Mark, the Rev. Heidi Haverkamp, an Episcopal priest, echoes the comparison made by the Los Angeles Times columnist Steve Lopez. She asks “What if this passage is about humility, [and] not [about] possessions” or riches? (Living the Word, Christian Century, Heidi Haverkamp, September 26, 2018, page 20).

Jesus makes a promise to all who sacrifice for the sake of the gospel that the rewards are God’s to give. He concludes his metaphor of comparing the difficulty of a rich person to enter the kingdom of God to a camel attempting to go through the end of a needle by saying, “Many who are first will be last, and the last will be first.”

“A young man throws himself at Jesus’ feet, asking for spiritual direction” He already does all the usual religious stuff, but he wants something more.” So Jesus again gives him the challenge to sell all he has and to give the money to poor and then to follow him (Op. cit.).

But this is not the kind of spiritual direction “that the young man was hoping for. Haverkamp points out that we live in a time when we have so many possessions. “Selling them off would be a full-time job, if we could even find buyers.” Most of the things we have are disposable and inexpensive - at least for now. The current war on trade may change that in the years to come, but for now most folks would rather buy something new at Target than from anything found at a weekend garage sale.

“More often,” she writes, “we fill garbage bags to rid ourselves of our possessions, dropping them off in the trash or at Goodwill, perhaps while reading books or blogs about the joys of decluttering” (Op. cit.). Our landfills and oceans receive our clutter, weighing down soils, waters and our fellow creatures with our disposable abundance. Disposing of our possessions today is not as pure or effective a spiritual practice as it may have been in Jesus’ day (Op. cit.).

Being a disciple of Jesus was less about spiritual rigor and more about love: getting along with one another, serving the sick and those living on the margins of society and leaving behind our attachment to our possessions to follow him.

When the rich young man asked Jesus what he must do to inherit eternal life, Jesus asks him to give up the life he knew and to live for others. Haverkamp explains, “Inheriting eternal life . . . is not about checking off boxes, not even the boxes of the commandments. Whatever we think eternal life means, perhaps the first lesson is that we cannot earn or create it for ourselves. Perhaps, the eternal life that Jesus offers means emptying ourselves and our lives [in humility] rather than accomplishing anything” (Op. cit.).

The temptation we face with wealth and possessions is to succumb to arrogance. A life of discipleship requires that we are ha‘a ha‘a – humble – rather than ho‘okano – arrogant.

Haverkamp remembers an elderly Catholic sister who was her spiritual director. “She listened to my story [when I was in a spiritual crisis],” she said “and she told me two simple things. First, that God is love. Second, pointing her finger at me with firmness and affection, she said: “Remember, you are poor. You do not have the resources to save yourself, fix your problems or change the world – only God does” (Op. cit.).

You and I may believe in our ability to resolve the challenges we face in our own lives and we do bear some responsibility. We point to how we have been able to possess “a great education” and how we have become successful in our work life. Some of us are fortunate to have health insurance, retirement savings and a house full of stuff (Op. cit.).

But Haverkamp concludes, “We cannot save ourselves, but God can.” The way to eternal life is not through what we achieve or possess but through our giving and serving. It is to claim the words for ourselves, “I am poor” (Op. cit.) or more precisely, “I am spiritually poor” and so I choose, we choose to follow Jesus for his sake and for the sake of the good news to serve and to give to others what God has given us.