Many years ago I came upon a rugged windswept beach at the west end of the island of Moloka‘i not far from the sand dunes of Mo‘omomi. It was a clear day. 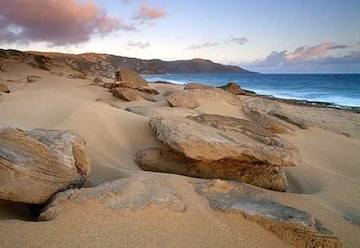 The sun was out scorching an ocean side desert landscape. On shore winds provided some relief from the morning heat as they swept over the cooler ocean waters.

I sat down and looked out toward the horizon and found myself leaving my work and the worry of the world behind me. I was, after all, on vacation.

I thought about my mother and how much she enjoyed beach combing for shells and bits of broken glass polished and made smooth by the sand and sea. I stood up and found my way to the shoreline imagining myself on one of her forays searching for the most beautiful shell I could find.

I walked the length of the narrow beach and was pleased with what I was able to find. I returned to the spot where I had initially sat down. I was feeling rather proud of what I had been able to collect.

As I mused over my new-found collection I heard an inner voice say, “Now, the one you want to keep the most, you must leave behind here on the beach. You are not to take that one shell with you.”

At first, I shrugged it off. Despite the cool ocean breeze, I thought: “It must be heat!”

But I heard the voice a second time, “Leave the one you want the most behind.”

“But why?” I asked out loud aware in that moment that anyone nearby would have been startled by my question.

The voice responded, “The things we truly value are not ours to possess. They are meant to be shared.”

Annoyed, I thought, “It really must be the heat!”

But as the moment passed, I found myself giving up the one shell I wanted the most and tucked it back into the sand. I left the beach that day mindful of how easy it is for us to attach ourselves to material things.

Many years later, I sat next to one of our kupuna or elders at a church gathering in Honolulu. I told her what had happened to me that day on the beach and that I was puzzled by what I had heard.

We talked for a few minutes and she sensed that I wanted an explanation for what had happened that day. “Whose voice was it that I heard that day?” I finally asked.

“Maybe,” she said, “the voice you heard was your tutu’s voice. Maybe your tutu who whispered in your ear long, long ago when you were a child that it was important not to always take, take, take; not be greedy but to be grateful and to share.”

When I read the text for The Second Letter of Paul to Timothy I heard in the writer’s voice, the voice of my tutu: “ . . . as for you, continue in what you have learned and firmly believed, knowing from who you learned it, and how from childhood you have known . . . ” I heard my tutu’s voice. “No be greedy. Share.”

The central truth of Paul’s letter is rooted in what Timothy learned from his own childhood – that “salvation is through faith in Christ Jesus.” Timothy is admonished to remember all that he had learned and come to believe. He is encouraged to carry out his ministry fully in sharing the good news of God’s love for the world.

You may be wondering what combing for seashells has to do with proclaiming salvation through faith in Jesus Christ.” Frankly, not much except that in both instances the lesson is that it is important for us to acknowledge and affirm what we have come to believe about ourselves and the world in which we live, about what we learned from our childhood.

For Timothy it was being reminded that “all scripture is inspired by God and is useful for teaching, for reproof, for correction and for training in righteousness . . . ” (2 Timothy 3:16) and for me it was remembering what my tutu whispered in my ear.

Remembering our childhood and the lessons learned is critical because we learn to love but we also learn to hate and to fear. Once before, on another occasion I shared with you the lyrics from Rogers & Hammerstein’s “You’ve Got to Be Carefully Taught.” The song comes from the musical “South Pacific.” At the time it was written and performed on Broadway, it created a bit of a stir.

Remarkably, its lyrics holds true for us, especially today, as it did many, many years ago.

On Friday (October 14, 2016), three members of a Kansas militia group were charged with plotting to bomb an apartment complex that is home to Somali immigrants in Garden City, Kansas. The attack was planned for the day after the November election.

The arrests were made after an eight-month FBI investigation. The militia group calls itself “The Crusaders,” and according to government officials its members “espouse . . . anti-government, anti-Muslim and anti-immigrant extremist beliefs.” (The Maui News, Saturday, October 15 2016 A5)

It is alleged that the group “chose the target based on their hatred for Muslims, people of Somali descent and immigrants and out of a desire to inspire other militia groups and ‘wake people up.’” (Ibid.) One of the men is 47 years old and two are 49 years old.

If there is any truth to Rogers & Hammerstein’s lyrics, it is likely that the three men learned to hate and to fear before they were “six or seven or eight.” There are other kupuna or elders from other cultural and religious traditions who teach us about the consequences of fear.

A letter was written to Timothy. Nikki Giovanni and the late Dan George both wrote poems.

Dan George was a chief of the Tsleil-Wautuh nation located in North Vancouver, British Columbia, Canada. He was an author, actor and a poet. His best-known written work is “My Heart Soars.” In 1970 he was nominated for an Academy Award for Best Supporting Actor in the film, “Little Big Man.”

Among other things, he wrote the following ‘olelo no‘eau or wisdom saying:

What one fears,
one destroys

Nikki Giovanni is an African American poet who reached prominence in the late 1960s and early 1970s. Her poetry is a testament “to her own evolving awareness and experiences: from child to young woman, from naïve college freshman to seasoned civil rights activist, from daughter to mother.” (www.poetryfoundation.org)

It is said that her informal style makes her work accessible to both adults and children. In an interview, she explained that her appreciation for her African-American heritage came from her outspoken grandmother. “I come from a long line of storytellers.”

That is one of the reasons I am drawn to her work. In her poem “Allowables”, Giovanni joins her voice with Chief Dan George when she writes:

Timothy is reminded and we are reminded again that “all scripture is inspired by God and is useful for teaching, for reproof, for correction and for training in righteousness, so that everyone who belongs to God may be proficient, equipped for every good work. (2 Timothy 3:16-17) If we are to proclaim the good news of Jesus Christ; if we are to carry out our ministry fully then we must proclaim what we know to be true - that compassion always overcomes hate; that love always casts out fear. Always.

It is written: “God is love, and those who abide in love abide in God, and God abides in them. There is no fear in love, but perfect love casts out fear. Those who say, ‘I love God,’ and hate their brothers or sisters are liars; for those who do not love a brother or sister whom they have seen, cannot love God whom they have not seen. The commandment we have from him is this: those who love God must love their brothers and sisters also.” (1 John 4:16b, 18a, 20-21)