We arrived at the Molokaʻi airport terminal an hour and a half before our flight was scheduled to return to Maui yesterday. We had just spent the last two days attending a meeting of the Board of Directors of the State Council of Hawaiian Congregational Churches.

The eleven-member board includes four officers as well as the presidents of the island councils that include Kauaʻi; Oʻahu; Central, West & South Maui; East Maui; Topside Molokaʻi; East Hawaiʻi island; and West Hawaiʻi island. The State Council serves as an advocate for what are identified as historic Native Hawaiian congregations including our church here in Mākena.

All of the churches were established after the arrival of missionaries from the American Board of Commissioners for Foreign Missions. Today, the needs of the churches include pastoral and lay leadership, the maintenance and repair of small membership churches and programs. 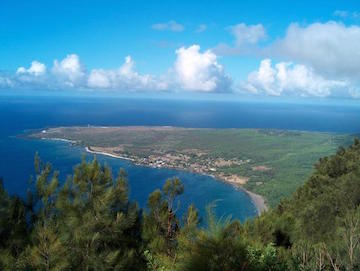 After a morning visit to Hoʻolehua, we traveled to the east end of the island to the Kalaupapa lookout. When we arrived, the view to the Makanalua Peninsula was clear and we were able to see the settlement.

We offered our ho’okupu and gifts of oli (chants), lei from our respective islands, paʻakai (salt) and hīmeni (hymns). And just as we were ending our time there, we heard a clap of thunder in the distance and almost immediately afterward a curtain of fog moved across the length of the lookout and a light rain began to fall.

From the lookout we proceeded to the town of Kaunakakai and spent time visiting a community center that provides day care for the elderly. We also had an opportunity to hear from the director of Nā Puʻuwai, a community-based health center for Native Hawaiians. Outside of Waiʻanae, Oʻahu the island of Molokaʻi has one of the largest population of Native Hawaiians and so the need for health care among Native Hawaiians is important.

Later that evening we watched a performance of Hānau Ke Aliʻi, the epic tale of Kamehameha the Great who united the Hawaiian islands after many years of war and conflict. The performance at the Molokaʻi High School gymnasium featured Kumu Hula Micah Kamohoaliʻi and the members of Hālau Nā Kipuʻupuʻu of Waimea, Hawaiʻi. The performance traced the life of Kamehameha from his birth to his death.

The next day we stopped to visit the gravesite at Kapaʻakea Cemetery of Auntie Stella Iaea. Then we met Auntie Stella’s daughter, Earline, at Kaluʻaaha Church before going to the west end of the island to Waialua Church for a workshop and lunch.

By the time we returned to the airport twenty hours after our arrival, we were all a bit worn down and worn out. When the announcement was made 20 minutes before our flight was to leave that it was going to be delayed for an hour, I was not pleased and began to get grumpier with each passing minute.

My five traveling companions seemed unperturbed by the delay. We had already passed an hour of time talking about IMAX movie screens and the exorbitant cost of theater hot dogs and popcorn; vertigo; and cockroaches – not exactly what one would expect as subject matter at a church meeting but the laughter that ensued did help pass the time.

I had planned to return home in time to prepare for this morning but the delay was a cause of concern for me. I decided I would use the additional hour of waiting to look at our reading from The Gospel According to Mark and the ways in which we measure greatness in our lives and in our world.

The world often measures greatness in terms of wealth or power or prestige. Jesus had no wealth, power or prestige, but he did demonstrate a self-giving greatness that has transformed the lives of countless millions down through the generations.

Some forty years after Jesus’ death, Mark’s community may have also been struggling with this question of greatness. For Mark to tell the story about James and John was a way to address that issue in his own community. (The Word & You, Nan Duerling, United Church Press, Cleveland, Ohio, 1997, pages 27-28)

The story in our reading comes immediately after Jesus pointed to his suffering and death for the third time (Mark 10:32-34; see 8:31 and 9:31). In response to Jesus’ announcement of his impending death, John and James asked for power. (Op. cit.)

I imagine they may have been fearful of what was going to happen to them.

Jesus’ own ultimate power and glory did not bypass the cross. He drank the cup of suffering and was baptized into the waters of death. Were John and James really willing to follow him in this? (Op. cit.)

They responded, “We are able.” Jesus went on to remind them that they would experience their own measure of pain and suffering (Acts 12:1-2) and James eventually did. He died a martyr’s death. (Op. cit.)

Jesus went on to contrast tyrannical power over others with following him as servant or slave (Mark 10:43-44) to all. Our early Christian forebears had to deal with the scandal, the offense of the cross. Given the popular understanding of the Messiah as a figure of political and military power, a crucified Messiah was a contradiction. But they found in their Scriptures one of the servant songs of Isaiah (Isaiah 53:12) that could support an understanding of a suffering Messiah. (Op. cit.)

Jesus’ witness proclaims that the mark of true greatness is not about physical strength and prowess, but about serving others and to free people for new life. Historically, many measure Kamehameha’s greatness by his physical ability to lift the Naha Stone of Hilo. Others will point to his company of 1,200 swift runners; his skill as a warrior in hand-to-hand combat, his fleet of 1,200 war canoes and his army of warriors numbering in the thousands.

Much is made of Kamehameha as he launches an invasion of 1,200 war canoes filled with warriors led by Kūkāʻilimoku, the god of war. In the hula ‘īlio or dance of the dogs, it is said that his warriors move like a pack of dogs ravishing the land, taking island by island.

And when Keōuakūʻahuʻula plundered Kamehameha’s land in an act of war killing men, women and children, it is said that Kamehameha was angered and deeply troubled by what his adversary had done. As a result of what he had seen, Kamehameha would go on to establish what became known as the Law of the Splintered Paddle.

The law meant that the lives of women and children and the elderly would be spared in times of war.

In the end Keōuakūʻahuʻula’s army was destroyed by a volcanic eruption as they fled from Kamehameha’s warriors. Many were convinced that the fire goddess Pele favored Kamehameha.

With Keōuakūʻahuʻula’s defeat, the oli or chant ‘O Kamehameha Ka Lani Hoʻano Ke Aliʻi tells of how Kamehameha was exalted over all the land. The people are called to bow down to the conqueror of the islands.

Yet, it was not simply his conquest in battle that Kamehameha was great. It is said that once peace fell upon the land, he encouraged the people to till the soil; to set aside the bad and keep the good; to celebrate the Makahiki when all wars cease. In time Kamehameha the warrior-king became a generous and forgiving aliʻi and that ultimately was the true measure of his greatness.

I suspect that when the other disciples heard what James and John were asking of Jesus that their anger may not have been unlike Kamehameha’s anger toward Keōuakūʻahuʻula. The best way to have power and glory, Jesus seems to say, is to serve others. If we want to have power, then we must empower others. If we want to be the first in line, then we must go to the back of the line.

St. Francis of Assisi is said to be the author of a very familiar prayer that I want to share with you in closing. It points the way to servanthood. Let us pray:

O Divine Maker,
Grant that we may not so much seek
to be consoled as to console,
to be understood as to understand,
to be loved as to love.