“Ola: God in the Heartbeat of Life”


John Philip Newell remembers, “When my daughter was born, the doctor was reluctant to give the discharge clearance. I wanted to take her home from the hospital as soon as possible. Something was amiss with her heartbeat!”

“Despite being largely corrected by surgery a few years later, it was hard to trust the reassurances. Over the years, her heartbeat has become a metaphor for what is really important in life choices and directions.” 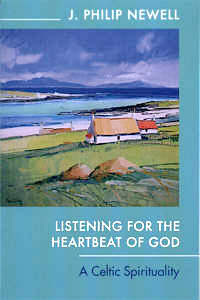 “The practice of listening for the heartbeat of God has been linked with Celtic Christian spirituality for hundreds of years,” he writes. “Inspired by John, the beloved disciple, ‘this spirituality lent itself to listening for God at the heart of life.’ This spirituality has bubbled along, at the fringes of the church, inviting people to recognize God’s presence in the world and the ways in which life mediates God in us, and in the ‘world’s collective life and consciousness.” (J. Philip Newell, Listening for the Heartbeat of God: A Celtic Spirituality, Paulist Press: New Jersey, 1997, pages 2, 5)

Newell, a poet, scholar, and peacemaker, is an ordained minister of the Church of Scotland. He received his PhD from the University of Edinburgh and is internationally acclaimed for his work in the field of Celtic spirituality.

Newell makes the observation that his daughter’s heartbeat is a metaphor for what is really important in the choices we make and the directions we take in our lives. In a way we may liken it to a metaphor for the people of Israel as they make their way out of Egypt and into the wilderness on their journey to the promised land. They are faced with life choices and directions. While they frequently stumble and fall along the way, Moses assures them time and time again about the centrality of God in their lives.

Our reading from The Book of Exodus this morning comes in the aftermath of the decision made by the people to build an idol in the form of a golden calf. In his anger, Moses smashed the tablets on which God’s covenant with the people was written. Although Moses argued with his brother Aaron and lambasted the people, he continued to plead their case with God.

God instructs Moses to continue the journey and to lead the people, but the people mourn when they hear God has decreed Moses is not to go with them into the promised land. (Seasons of the Spirit, SeasonsFUSION, Season of Creation, Pentecost 2014, Wood Lake Publishing, Inc., 2013, page 106) It is against this background that Moses proceeds to intercede with God on behalf of the people. Moses pitches his tent outside the camp and becomes engaged in a conversation with God.

“You have given me this job but who is going to help me?” Moses asks. “Do you expect me to do it alone? You said that you know me and that I’m okay. So show me what to do, so I know I’m okay and don’t forget the people who are following me.”

Moses responds: “It’s not enough for you to say that to me. I need to know you are going with the people. If they do not experience your presence, then they will not move forward. How else will they know that you care?”

God acquiesces, not out of regret or remorse, but grace and mercy. “I will do the very thing that you have asked,” God tells Moses, “for you have found favor in my sight and I know you by name.” (Exodus 33:17) Whatever fears or anxieties Moses may have had of God’s response to what the people had done is overcome.

“I know you by name,” God says to Moses and in that declaration we see the desire of the human heart to know God and for God to know each of us by name.

One would hope that Moses is satisfied by God’s response. But he is not and he now wants to see the glory of God. But what would he see?

God is the creator of all that is and cannot be seen in the context of the world in which we live. In reality, we see the results of God’s presence and actions, but we do not see God as an element of creation. Following this exchange, Moses receives a second set of the tablets and makes preparations to continue the journey.

That presence is keenly felt in the work of A Cup of Cold Water, the outreach ministry of the Episcopal Churches of Maui & Friends. Through a grant provided by the Outreach Committee of Keawala’i Congregational Church, and support provided by other churches, we have been able to support the Community Care Van that provides assistance to the homeless of Maui.

A Cup of Cold Water celebrated its first anniversary last week on Sunday, October 12th. Throughout the year, team members of A Cup of Cold Water have posted weekly journal entries on-line highlighting the men, women and children they have come to know. The following entry was made on October 4th: “In Safeway park (sic) lot, we come across Terry and Richard. Happy to see us they wave us down. While talking, Richard wonders if we knew his girlfriend Tabetha, who died a few months back. I tell him I’d known her for years and that four days before she died we spent quite a bit of time with her at (the Lāhainā) banyan tree. She was getting ready to visit her mom in Woods Hole, Massachusetts, her home. She needed some new clothes for trip. Shirley patiently went thru all the stuff in the van and came up with a pretty outfit for her.”

“The night of her passing was a sort of mystery to her street friends. Rumors and bizarre tales were legion.”

“Richard tells us no one knew they were a couple and that she had been staying with him for quite some time. ‘She was in terrible shape that night. I didn’t know what to do.’ Now sobbing, he continues, ‘She died in my arms.’ She never made the trip home to her mom.”