“A Time for Justice”

Six years have gone by since the article appeared in The New York Times on June 11, 2007. The title of the article read: “In Hawaiʻi, spam is a beloved comfort food.”

Since World War II, Hawaiʻi has led the nation in the consumption of spam. In 2007 we were consuming, on average, about 5 million pounds a year or an average of six cans for every man, woman and child. 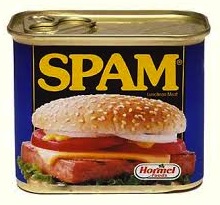 Most everyone else in the country considers spam “poor people’s food.” I grew up in the shadow of World War II. I never thought that our family was poor.

We grew up on spam. Spam and cabbage. Spam and green beans. Spam and onions. Spam and eggs. Spam and rice. Spam and fried rice. When others pointed out the ingredients that went into the making of spam, it was enough for me to decide that as an adult it was time to take spam off my food shopping list.

Thanks to a sketch by the British comedy group Monty Python, spam is portrayed as “ubiquitous and inescapable.” It’s everywhere. For many Americans, spam has become a four-letter word for unwanted email.

To speak of spam in such a pejorative manner is difficult. After all, there is nothing more satisfying to me than to consume a spam musubi with the white rice and dried nori or seaweed wrap from Minute Stop after a long, hot day at the beach.

But for the purposes of our Biblical reflection this morning we will forgo any further talk of spam as a primary and supplemental food choice. Instead we will consider spam in its electronic application.

I receive spam emails every day of the week. There was one that caught my attention this week. The subject matter read: “Special Bucket List for 2013.” What followed was a list of 13 items.

Without going into detail about each of the items, it is enough to say that I took a particular interest in the list when it concluded: “Only 86 per cent will send this on. Should be 100 per cent. What will you do? If you agree, send it on if only to one person.”

Then the clincher: “In God we trust.” What was troubling was the anger and resentment that seemed to permeate the list.

I usually ignore “lists” that I am asked to forward on to others, especially when they are declarative statements that seem to require that whoever receives the list and passes it on be of like-mind. The intent is not to invite dialogue or critique but to create what a friend calls “echo chambers.”

If what is on the list is repeated and forwarded to others often enough then that repetition is soon accepted as a validation that what is being said must be true. But more often than not all the repetition becomes is an echo.

That echo is something that seems to be at the heart of our reading from The Second Letter of Paul to Timothy. Paul calls upon Timothy to remain responsible for a group of churches and “for preserving them from destructive influences from without and from dissidents within.” (The New Oxford Annotated Bible, NRSV, Metzger & Murphy, New York, Oxford University Press, 1991, page 306)

Timothy is urged to rekindle the gift of God within himself, remembering all that he learned from his mother Eunice and grandmother Lois. (2 Timothy 1:3-7) He is not to be ashamed of bearing witness to all that he has learned about Jesus. (2 Timothy 2:8-18)

He must remain sound in his teaching even as he encounters others with their “profane chatter.” (2 Timothy 2:16) If not, the result “will lead people into more and more impiety and their talk will spread like gangrene.” (2 Timothy 2:17)

In our day and in our time, I would paraphrase Paul’s words to Timothy in this way: “The time has come when people will not put up with sound doctrine, but having itching ears, they will accumulate for themselves others of like-mind through the internet to suit their own desires, and will turn away from listening to the truth of God’s word and wander away into echo chambers to hear only what they want to hear.”

I would then add Paul’s own words: “But as for you, continue in what you have learned and firmly believed, knowing from whom you learned it, and how from childhood you have known the sacred writings that are able to instruct you for salvation through faith in Christ Jesus.” (2 Timothy 3:14-15) We would do well to heed Paul’s words to Timothy for ourselves, if not from childhood, then from the birth of our own journey of faith.

We affirm that Scripture is suited to provide instruction in how we are to live a life of faith. Paul reminds Timothy and he reminds us that all scripture is “useful” for teaching. (2 Timothy 3:16) It is a modest claim but one that is useful in four respects.

Third, it is a source for guiding our lives and fourth for providing discipline for those who are committed to the quest of God. (Preaching Through the Christian Year, C, Craddock, Hayes, Holladay & Tucker, Trinity International Press, Harrisburg, Pennsylvania, 1994, page 445) Instruction, correction, guidance and discipline.

Like Timothy we are to always be sober in carrying out our ministry. Like the widow we are not to lose heart but to persevere in and through our faith.

What is it that we struggle with in our own lives? The world clamors for our attention. In the midst of all of the noise, all of the echoes - we can quickly lose our way. We wander away from one another enticed by the chatter of the world.

The proclamation we are invited to make “in season and out of season” is this: Pray always. Be sober. Do not lose heart. Be persistent. No echo chambers here.

As for electronic spam? No. As for canned spam? Maybe not six cans a year, but at least one, enough for several spam musubi.