"The courage to die"

Her name is Zeba Husain and this is her story.

“On the outskirts of Islamabad, Pakistan, there is a neighborhood a world away from the luxury cars, private schools, and orderly streets in the capital. Here, around a Sufi shrine called Bari (Bah-rhee) Imam (E-mam), mud-brick houses line the dirt road, little boys with dirty faces offer to wash cars for less than a dollar, and girls in torn dupattas (dew-pah-dis), long scarves, try to sell flowers to people who come to pray at the shrine.” (“People Making a Difference,” The Christian Science Monitor Weekly, Maija Liuhto, Contributor, October 1, 2018, page 39). 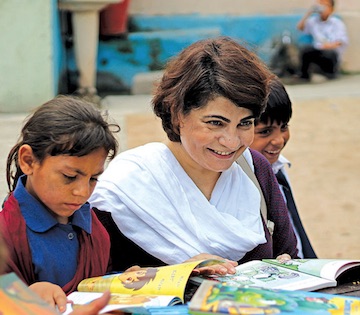 “But not far from the shrine is a school that provides education and solace to these street children, who otherwise would face abuse by gangs that operate in the area. Zeba Husain, the founder of Mashal (Mah-shell) School, is greeted enthusiastically by the students as she walks in the gates with a smile. There is a never-ending flow of people to her office – mothers, volunteers from the country’s top colleges, and private donors with their checkbooks.

Husain is clearly loved in the community. And yet her life has been an uphill struggle. Getting her initiative to where it is today – with close to 1,000 students, four branches around the capital and 790 former students mainstreamed into the government school system – has not been easy” (Op. cit.).

“I started with two children 10 years ago,” she said.

What spurred her to dedicate her life to the street children? Husain recalls her own experiences in her youth. “She says as a child, she encountered sexual advances by mullahs (moo-lahs) in madrassas (mah-drah-sus). ʻThey would try to touch me,’” she said.

During a short stay in London in the 1970s, she said she also experienced racism. “Feeling harassed and feeling uncomfortable was something that was truly embedded in my feelings. I could feel that a person needs to be free of these things, of exploitation,” she explained.

“But it was working with refugees as part of United Nations operations in Pakistan that really gave her a sense of what some people have to go through. ʻThat was something that changed my life because I had never seen that aspect of humanity, the human suffering,” she said.

She went on to say, “Some of us just get trapped. I’ve seen so many [people] just taking their own lives because of the hopelessness . . .”

Such hopelessness is what Husain could see in the eyes of the street children at Bari Imam when she first came across them 10 years ago. She had come to area with the intention of going on a hike up to the lush Margalla Hills that surround Islamabad.

Husain had returned to Pakistan from the United States. Years earlier, she had moved with her parents and children to the United States after a difficult divorce. But her father’s sudden death persuaded her to accompany her mother back to Pakistan. It was around the time of her return that she was diagnosed with a brain tumor. “

” she says. “But then I had a dream which made me realize there is a reason for this, that my life is only starting now.”

When the diagnosis of tumor was benign, she knew it was time to act on her longtime dream of helping the poor. So Husain told the children that day that she would start teaching them.

She quickly realized that it was a more complicated task with the children -first needing attention for some health issues. Husain included subjects such as nutrition and hygiene and she sought to address behavioral issues including “bullying, stealing, pinching, biting and sexual abuse in the classroom.

The school began to grow. Soon, women in the community became interested. She began to provide the women with the development of skills. “They could see their future in these children’s eyes,” she said.

The curriculum was tailor-made to suit the needs of the children and families. That meant the school day was arranged so the children would still have time in the afternoons to work.

Because of poverty, parents expected their children to work, no matter how young or vulnerable they are. It was and it remains her hope to break the patterns of behavioral problems that have been exacerbated by extreme poverty and abuse so that the children will be free to realize what their interests and passions are.

Owais (Oh-wace) is a 12-year-old boy who has developed a desire to help and serve others. He is disabled having had a leg and hand amputated after an accident at home. “

Husain remembers Owais as a “shattered” young boy when he first came to the school. Overtime his confidence grew and he dreamed one day of riding a bicycle.

Many other students have now completed their education. “And the beauty of it” Husain said, “is that they all want to do something for others.”

One would think that those in the wider community would welcome the change for the street children. But some, especially members of the street gangs, were not happy.

They started throwing cow dung at the school. There was a report of a shooting incident one day.

But Husain had seen the suffering of too many children. Her response to the threats of violence was clear: “I said if I have to be shot down for this work then let it be, because I would rather die for a cause than [die for no special reason]. So they realized this woman is not standing down,” she says.

The story does not identify whether or not Husain is a Sufi, a Muslim or a Christian, but her story nevertheless sheds some light on our reading from The Gospel According to Mark. Our reading speaks of the suffering that Jesus must undergo and the meaning of that suffering for the people.

Within the larger context of Mark’s account of Jesus’ life (Mark 8:27-10:45), we find the third and last prediction his suffering and death. “Following the first prediction (Mark 8:31), Simon Peter strongly objects and rebukes Jesus. Following the second (mark 9:31), the Twelve disciples engage in a discussion as to who is the greatest” among them (Preaching Through the Christian Year B, Craddock, Hayes, Holladay & Tucker, Trinity International Press, Harrisburg, Pennsylvania, 1993, page 446).

In our reading for today, James and John ask for a favored position beside Jesus in “glory” (Mark 10:37). Like Peter and now James and John, all of the other disciples become blind to the difficult days that lay ahead and the meaning of what is to come.

In their blindness, they will eventually abandon Jesus (Mark 14:50). Some scholars have said that Mark addressed his letter to a church - “that though having the advantage of hindsight,” did not fully understand that embracing the cross is at the heart of what it meant for Jesus to be the Messiah and what it meant of those who chose to become his disciples.

Jesus responds to the request of James and John by saying to them, “You do not know what you are asking” (Mark 10:38). Jesus uses two metaphors to describe what is to come if they are to be seated by his side after his death. First, he alludes to “the cup of wrath” found in The Book of Isaiah (Isaiah 51:17, 21) and The Book of Lamentations (Lamentations 4:21). And second, he alludes to baptism in the overwhelming flood recorded in The Book of Psalms (Psalm 42:7; 69:1-2; Isaiah 43:2).

He asks them if they are able to do what will be required of them and they insist, “We are able” (Mark 10:39).

The other ten disciples are beside themselves with anger. Who does James or John presume to be that they would find a favored place beside Jesus, after their own deaths?

It is then that Jesus takes the opportunity to instruct all of them on the matter of a life of service in the kingdom of God. “Jesus separates true greatness from the exercise of authority over others and reverses the usual categories of service and greatness” (Ibid., page 447)

Power and position? No. Sharing and serving? Yes.

Jesus said, “ . . . whoever wishes to become great among you must be your servant. I did not come to be served but to serve.”

In the early church and down through the centuries Jesus’ words have continued to be difficult to hear and to obey. Jesus is clear that his mission is to be the mission of those who chose to follow him –to serve, and not to be served (Mark 10:45). His death was and is a ransom that set free those who were and are held captive by the principalities and powers of the world. So Jesus’ purpose was to serve and to die and by dying, to set others free.

As Christians we often neglect to acknowledge the courage it took for Jesus to enter Jerusalem for the final time – to face his own death so that we may have life. I would say Zeba Husain is no less courageous in her desire to serve the street children of Islamabad.

Her tumor has come back. She is on constant medication. Her hope is to continue for another five years and then hand the work over to someone else.

Husain’s courage to serve those in need has given her the courage to face her own death - whether by a debilitating disease or even by an angry gunman. “Making a difference for a little time goes a long way because it restores your confidence in humanity . . . this is my lifetime’” she said. “It’s helping me to live as well. I’m doing something which is helping others, and it’s giving me life and healing me” (“People Making a Difference,” The Christian Science Monitor Weekly, Maija Liuhto, Contributor, October 1, 2018, page 40).