"Faith and Hope in Christ"

It was during the Makahiki that taxes in the form of produce and personal property were gathered. One collection was made for the ruling chiefs and members of their courts and another for the members of the religious or priestly class. 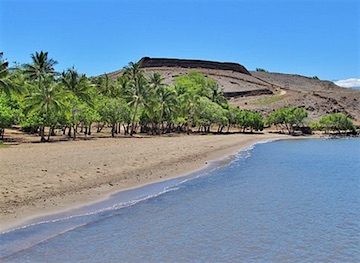 The konohiki or the chief’s land manager collected taxes that included food items such as pigs, taro, potatoes, and vegetables and personal items such as bird feathers, rope, fishing nets, fishhooks, tools, bark cloth and mats. (Pu‘ukoholā Heiau: “A Cultural History of Three Traditional Hawaiian Sites on the West Coast of Hawai‘i Island,” Chapter 1: Before the Written Record, National Park Service, nps.gov) The system of taxation was not without its challenges especially when the competition for resources grew as the population increased.

While much, much more may be said about the economic system of ancient Hawai’i and its system of taxation, it is clear that the issue of paying taxes is one with which we are familiar, particularly as Americans in the United States. Disagreements around paying taxes is what pushed the early American colonies to issue their call for independence from Great Britain.

The Stamp Act, passed by the British Parliament on March 22, 1765, was a new tax imposed on the American colonists. It required them to pay a tax on all commercial and legal papers.

What we now know as the Boston Tea Party today became a political protest in 1773 against the taxation levied by British government. It became an enduring symbol of the drive for American independence. “Taxation without representation is tyranny,” became the proclamation made throughout the colonies. (Feasting on the Word, Year A, Volume 4, Bartlett & Brown, Westminster/John Knox Press, Louisville, Kentucky, 2011, page 189)

In our own day and time, the push to overhaul the U.S. tax code is front and center in the political debate roiling on a hill far, far away. It would seem that some of the same disputes could be heard among the Jewish people in the first-century CE in Palestine. It was a political reality fraught with conflict and controversy.

Marvin McMickle, a former Professor of Homiletics at Ashland Theological Seminary in Ashland, Ohio and now the 12th President at Colgate Rochester Crozer Divinity School in Rochester, New York reminds us that our reading from The Gospel According to Matthew should not surprise us. “Palestine was a colony of the Roman Empire, and the Jews were paying taxes that supported the army and government that occupied their country. The Jewish people,” he said, “had grievances around the question of taxation.” (Op. cit.)

It is not surprising then to see that people, whether in the American colonies or in Palestine, took opposite sides on the question of taxation. In the early American colonies, there were those who were loyal to the British government and patriots seeking independence who were opposed.

In ancient Palestine, the Pharisees were opposed to Roman taxation; the Herodians were supportive. But it was the Pharisees who sent a delegation of their own disciples along with some Herodians to see Jesus one day. The Pharisees viewed the Roman tax as a heretical and an assault on the laws that governed their religious life. They bristled at the requirement to use a special coin that carried an image of “the divine Caesar” to pay their taxes. For them, the coin was a violation of the first and second commandments – of graven images and other gods. (Exodus 20:3-17)

On the other hand, the Herodians, supported the Roman-endorsed dynasty of Herod Antipas and, therefore, the tax. (Preaching Through the Christian Year A, Craddock, Hayes, Holladay & Tucker, Trinity International Press, Harrisburg, Pennsylvania, 1992, page 483) They hoped Jesus would oppose paying taxes to Caesar so they could accuse him of treason or sedition against Rome. The Pharisees hoped that Jesus would support paying taxes to Caesar so the Jewish people would see him as a Roman sympathizer.

Given their divided loyalties, McMickle concludes, that it was “unlikely that anything could have caused the Pharisees or the Herodians to cooperate (with each other), except (for) their mutual desire to be rid of Jesus. (Feasting on the Word, Year A, Volume 4, Bartlett & Brown, Westminster/John Knox Press, Louisville, Kentucky, 2011, page 191) It quickly became evident that whatever Jesus’ response was going to be, he would surely displease someone. (Preaching Through the Christian Year A, Craddock, Hayes, Holladay & Tucker, Trinity International Press, Harrisburg, Pennsylvania, 1992, page 483)

The question they posed to him seemed straightforward and yet Jesus was keenly aware of their malice. “Tell us, Jesus, what you think. Is it lawful to pay taxes to the emperor, or not?” (Matthew 22: 17) Jesus perceives that the occasion of their visit as something more than a game of wits.

The question is what should we do when the God we serve and the government under which we live pulls us into a situation of divided loyalties. Jesus’ response does not answer the question directly, but he does call our attention to the nature of the struggle.

It would seem that for Jesus and for us discerning what is God’s and what is Caesars’ will be an ongoing test of how we live in the world. For the early church and for us today, the task of understanding how Christians are to relate to political structures remains. (Romans 13:1-7; 1 Peter 2:13-17; 1 Timothy 2:2, Titus 3:1, Revelation 13:1-18, 18:1-24). There will be times when we may find ourselves supporting and sometimes resisting the Caesars of our day. Like Jesus’ response to the Pharisees and the Herodians, the answers are never simple “nor are they final; the struggle resumes with every new situation.” (Op. cit.)

The issue for us today is not so much about paying taxes as it is about to paying attention to what it means to render to Caesar what is Caesar’s and to God what is God’s. Should we remain silent in the face of bigotry and racism? Should we protest the exploitation of the earth for its natural resources to the detriment and degradation of the land, air and sea? What can we do to curb gun violence? How do we speak “truth to power” to the Caesars of this world?

In her reflections on Jesus’ encounter with the Pharisees and Herodians, writer Debie Thomas who blogs at Journey with Jesus, writes: “The Roman coin of Jesus’ day bore the image of the emperor. As human beings created by God, we bear God’s image, we are created in God’s image. That means, if we keep the analogy going, that we owe God everything – our whole and entire selves.” (Christian Century, September 27, 2017, page 21)

She asks, “What can this mean in these hard days when families, communities, and churches are splintering over political and cultural differences that seem unbridgeable? When I look to Jesus to think about how to practice my faith in the political realm,” she continues, “I see no path to glory that sidesteps humility, surrender, and sacrificial love. I see no permission to secure my prosperity at the expense of another’s suffering, no evidence that truth-telling is optional. I see no kingdom that favors the contemptuous over the brokenhearted and no church that thrives for long when it aligns itself with (the) power (of the world).” (Op.cit.)

Thomas reminds us that remembering the God whose image we bear is about remember that God is love. Our highest debt is to love. – to love God and to love others as ourselves.