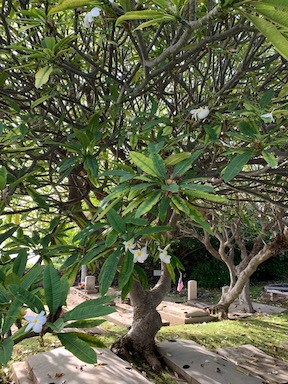 It has been said that a parable is like a fishing lure: full of attractive features like feathers and bright colors … and they end with a sharp little barb. The story from Luke’s gospel today certainly fits that description. Just when we get drawn into the drama of the two main characters (the feathers and bright colors as it were) – bam! We get a zinger – the little barb at the end – as Jesus reminds us of an important truth that has implications for the way we live our lives.

The backdrop of this week’s parable – and next – is the broader question being asked of Jesus: “Good Teacher, what must I do to deserve eternal life?” Have you ever thought about that? How do I know if I will be received into heaven?

Have I been good enough? Have l lived pono? Have I “held fast to that which is good?” Jesus, will you remember me when you come into your kingdom?

That seems to be much on the mind of these two very different characters that take center stage in today’s parable. [Pause]

The Pharisee was the learned scholar. Pharisees were the teachers of the law. They knew the law backwards and forwards and they took pride in their liberal interpretation. Because of their progressive understanding and interpretation of the teachings in the law and the prophets, we might refer to them as the “Congregationalists” or UCCers of the first century. Their chief goal was to make Torah observance available to everyone. Often called upon to lead in worship, these teachers could preach some very powerful sermons based on their understanding and scholarly opinion.

The Tax Man was not held in such high regard. Tax collectors were always viewed with suspicion and skepticism. They were in cahoots with the despised Romans. They were responsible to collect the taxes of all the citizens of the Roman territories of which Jerusalem was a part. The problem being they always collected much more than Rome demanded and pocketed the rest – and made quite a good living in the process. The citizens had no recourse since they had no idea exactly what Rome demanded. Not to comply could result in imprisonment or even death.

Both the Pharisee and the Tax Man were Jews. Both believed in and followed Torah law. Both worshipped in the Temple which is where we find them in this story. But these two were very different in the way they approached God.

The Pharisee stood and offered his prayer by pointing out to God just how pono (righteous) he was. “Look at me God. Look how good I am. I am so glad I am not like those OTHER folks: robbers, crooks, and adulterers – and heaven forbid, not like that Tax Man. You’ve seen how I live. I fast twice a week and tithe (or give 10%) on all my income. Am I NOT a shining example of what you expect for your kingdom?

The Tax Man remained seated, slumped in his chair – head in his hands – he lamented, “God, have mercy, forgive me – for I am a sinner. [Pause]

As observers to this story, we probably want to identify with the Tax Man – even though he was greatly despised. He didn’t bilk us out of our money so it’s much easier to sympathize with his lament, “God have mercy, forgive me, a sinner.” We know he has got it right. He recognizes his fault – confesses it – and begs for forgiveness. Surely God will bless that. Right?

Meanwhile the Pharisee is riddled with pride. Sure, he is living a righteous life – but his attitude is all wrong. He looks down his nose on those who are obviously breaking the Jewish AND Roman law. These “sinners” are examples of human depravity – robbers, crooks, and adulterers. His lifestyle may be exactly what God is looking for – but his attitude is obnoxious.

While it may FEEL good to identify with the humility of the Tax Man, I think it’s important that we all get in touch with our “inner Pharisee” as well.

Maybe this doesn’t speak to you, but I’ve – On Occasion – cast my own aspersions onto those who OBVIOUSLY are not doing what God would approve of. I MAY have – every so often – given a little “eyeroll” to those on the golf course or at Chang’s Beach as I drove along on my way to morning worship on a given Sunday. [Pause]

If you were ever a fan of Saturday Night Live, you probably remember the popular character – the Church Lady. Anyone remember that? Brilliantly portrayed by Dana Carvey, the Church Lady was humorous, raucous, and highly judgmental. While I found the sketches very funny and over the top, - The Church Lady DID help me to get in touch with my own inner critic – my “inner Pharisee” – as her infamous smirk allowed her (or me) to look down my nose at those who I feel simply do not measure up. “Isn’t that special.” Or “What do you think caused you to do that? Could it be … Satan.” It’s a trap we can all fall into.

These are the feathers – the bright colors on the lure I mentioned earlier – but – oh – the little barb at the end. Did you get that?

Yes, Jesus critiques the pride of the Pharisee. And, yes, Jesus blesses the humility of the Tax Man – but there is a barb in the parable – and it’s a zinger. But this barb is not intended to hurt. In fact, it is really good news - news we may not expect. It reminds us that eternal life is not something to be earned either through good actions – or our humble confession. On the contrary, all God wants is for us to come to God – to come to God in our prayer as ourselves – in complete honesty. That’s what God can work with.

Jesus says, “If you are content to be simply yourself, you will become more than yourself.”

That doesn’t mean that we can throw out the law or the commandments. And it doesn’t mean that we shouldn’t turn to God with our prayer of confession when we know we have blown it. But it suggests that God has formed us as a vital part of God’s beautiful creation, and we are good enough just as we are. God simply wants us to accept that grace, to be honest with ourselves and with God in order to deepen our relationship. We don’t have to prove anything nor lament how bad we may have become. [Pause]

I hope you can hear how important that is. It is “good news,” and we ought to receive it as a wonderful promise – a gift of God.

As St. Paul reminds us, “By grace you have been saved through faith. It’s not of your own doing. It is the gift of God. So, no one can boast.” We can do nothing more than to simply be ourselves. And be grateful. You be you! That’s it.

Our kuleana as persons of faith is to be our best selves – not to compare ourselves to others. To use the gifts God has given us as faithful stewards. To use those gifts to make our world a better place. And to celebrate the grace with which God has blessed us.

Mahalo Ke Akua for that blessing. Thanks be to God for that gift.