The flight took us to Boston’s Logan International Airport in the Indian Summer of 2006. I was invited, along with several other representatives from Hawaiʻi, to attend the Bicentennial Celebration of the Haystack Prayer Meeting in Williamstown, Massachusetts. 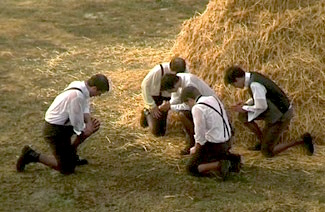 Two hundred years earlier on a Saturday afternoon in August 1806, five Williams College students, Congregationalists in background, gathered in a field to discuss the spiritual needs of those living in Asia. When a thunderstorm approached, they took shelter on the backside of a haystack and prayed.

The gathering that day came to be known as “The Haystack Prayer Meeting” and it was this meeting that launched the modern mission movement in the United States. Within a few years, the American Board of Commissioners for Foreign Missions (ABCFM) was formed and sent some of the first Protestant missionaries to other lands, including the first mission to Hawaiʻi in 1820 that gave birth to this church and many other churches throughout our islands.

I was invited along with a kupuna from Kauaʻi and a kupuna from Oʻahu to serve as resource persons for a workshop on the impact of the Christian mission in Hawaiʻi, both negative and positive. We were met at the airport by one of the residents of Williamstown.

After such a long flight to the East Coast, I was amused to find myself getting into a car for a three-hour drive going back in the opposite direction. As we left the city, the countryside opened up and soon we were in forested areas. Mention was made that the autumn colors were just beginning.

There was green all around but at every turn along the highway there were signs that the colors were indeed on their way. Our host in Williamstown was a member of First Congregational Church, United Church of Christ.

There were opportunities for us to meet at the church as well as on the campus of Williams College, the larger employer in the town. I enjoyed the change in scenery and the change in weather.

On the last day our time in Williamstown, I crossed over from the campus to the church parking lot. There were several trees whose leaves had turned various shades of red, yellow, purple, and brown.

I was self-conscious about picking leaves off the tree as souvenirs to remind me of my time in Williamstown. It occurred to me that those who live in such places might not be as appreciative as those of us who live in climates where trees, for the most part, are always green.

Some of our trees on island change color – like the jacaranda trees Upcountry with their lavender blossoms – but it would be a mistake to say they are deciduous like the trees in the parking lot at First Church, Williamstown. I decided that I was going to enjoy my little adventure so I painstakingly looked at each leaf selecting the brightest hues of red and yellow leaves.

When I returned to the home of our host, I placed the leaves carefully between the pages of my Bible for safekeeping and for transport back to Hawaiʻi. Yes, I did not declare them on my agricultural form.

I have never personally seen the autumn colors at their peak. I have only seen them in photographs and in film. I am told that the season lasts for only a few weeks.

Recently, while cleaning out my office at home, I came across one of the leaves I had carefully placed between two of the pages of the Bible I had taken to Williamstown. The leaf was in a very fragile state. As I picked it up it began to disintegrate in my hand.

I thought about the changing of the seasons in Williamstown and here on Maui and the ways in which we are reminded time and time again about how life comes to end, but that in each ending there is a new beginning. To say that the journey from Maui to Massachusetts was an arduous one would pale in comparison to the journey of 5,000 missionaries sent by the American Board of Commissioners for Foreign Missions to over 34 different mission fields around the world.

I would not even begin to say that it was arduous compared to the journey of the people whom Moses, Aaron and Joshua led out of Egypt, across the wilderness for years not hours, to an unseen destination. Our reading from The Book of Deuteronomy is about a journey to a new land, a new beginning, a new identity.

We see Moses’ life coming to an end but we also see a new beginning. Much has been learned along the way, and as the people are about to enter into a new land our attention is turned to Moses.

He had done much for the people since his call to liberate them from slavery. They escaped from Egypt even while pharaoh’s army was in pursuit. They were sustained by manna and water in the wilderness and received from God, through Moses, a new covenant of ten ways for living.

It was not an easy journey for Moses. Along the way he had to contend with the complaints from those unaccustomed to a life of wandering. He interceded on their behalf whenever they lost their way.

Through it all, Moses and God were pili – bound to one another. The Bible says that God knew Moses face to face. (Deuteronomy 34:10).

Now, in the land Moab, God takes Moses to Mt. Nebo and shows him the land of promise. It is then that he learns after all that he has gone through in their journey across the wilderness, he will not be the one to lead the people into the new land.

Moses’ life comes to an end in the presence of God, but not before Joshua was blessed and called to lead the people forward. Even after years of travel, the people are not so quick to cross over. They remained in the wilderness and mourned for Moses for 30 days before they made their final crossing.

From Moses we come to learn to trust in God, to understand the importance of prayer and more importantly to recognize the gift and grace of God in our lives. The story of Moses and the journey through the wilderness comes to end in our reading today. The people enter a new land and a new beginning.

As we conclude the story of Moses it is fitting that our reading from The Gospel According to Matthew includes Jesus summation not of the Ten Commandments but the two that are inseparable. On these two commandments hang all of the law and the prophets.