I do not remember her name. We came into each other’s lives for a brief moment. It was over thirty-years ago when we found ourselves in each other’s company as we joined others for an interfaith service at St. Mary’s Cathedral in San Francisco.

The Gulf War codenamed Operation Desert Shield had just been launched in response to Iraq’s invasion and annexation of Kuwait. The U.S. joined a coalition of 35 other nations in the war. At the time, there was the concern that it would turn into a quagmire and dissipate into a larger conflagration in the Middle East.

We gathered that evening at the cathedral to pray for peace with the hope that the war would end quickly and remarkably it did. After the service of prayer, we joined thousands of others at the plaza in front of City Hall in downtown San Francisco.

She was bound to her wheelchair because of multiple sclerosis. I offered to be by her side throughout the evening and to assist her with her wheelchair. She may have sensed my unease when I realized that the cathedral was set on a hill and the route to the plaza was down one of the very steep hills of the city.

She was quick to humor me and to say not worry about whether or not I would find myself responsible for causing wheelchair to careen down the hill to the plaza if I ever lost my grip. Her remark may me laugh and I relaxed and we were fine.

I found great comfort in knowing that she trusted me and that everything was going to be okay. Later that evening, after the rally, we made our way across the Bay Bridge and stopped at Fenton’s – an ice cream parlor in the city of Oakland. I am not sure if Fenton’s is still there but it was the go-to place for ice cream – no Ben and Jerry’s, no Baskin and Robbins.

I saw how much of a challenge it was for her to feed herself. Her fingers were gnarled. She arms were bent at her elbows.

I wondered how she was going to manage getting the ice cream on the spoon and then into her mouth. But she proceeded to do just that – manage. There were a couple of instances when the ice cream slipped off her spoon and plopped back into her ice cream dish before she could get a bite in. From time to time she would drool out of one side of her mouth.

Still, she managed. I would wipe her mouth with a napkin ever now and then.

I thought those sitting around us might not be too happy with seeing someone “making a mess of things.” I wondered if someone might be tempted to make fun of her and to mimic her awkward bodily movements as people are sometimes wont to do – whether they are in high positions of power or a schoolyard bully. 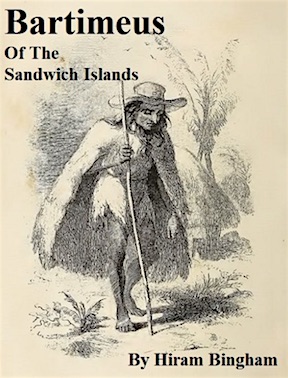 Our reading from The Gospel According to Mark is about a blind beggar named Bartimaeus. “When he heard about Jesus of Nazareth, he began to shout out and say, “Jesus, Son of David, have mercy on me” (Mark 10:48).

Many who were nearby basically told him to shut up! “Be quiet. You are an embarrassment.” But Bartimeaus persisted in calling out to Jesus.

Bartimaeus replied, “Let me see again.” Open my eyes that I may see.

It is said that “he was a small man . . . but so twisted in body that he seemed deformed. He moved painfully, and his face not pleasant to look upon, for he squinted out of sightless eyes” (Pioneer Hawaiian Christians, Frontier Books, Number Seven, Frances Eastman, Friendship Press, New York, 1948, page 4).

A relative took Puaʻaiki in after he was rejected by his own family at birth. But as the years went by, he was left to grow up as best he could. Constant exposure to wind and sun strained his eyes; by the time he reached adulthood he was a deformed, nearly blind beggar (Op. cit., page 60).

Others said he was an expert in hula, especially the hula maʻi which foreigners viewed with disdain saying it was a “vulgar ceremonial dance” (Op. cit., page 7). In time, the early American missionaries who made their way to Hawaiʻi would agree.

The hula maʻi was described as a hula with exaggerated arm gestures and leg movements and twisted facial expressions. Today we know the hula maʻi as one form of hula among many.

Far from being vulgar the hula ma’i is a celebration of human sexuality and the joy that comes from procreation. Puaʻaiki became skilled in the dance and his misshapen figure and limping movements caught the attention of people.

They laughed when they saw him dance. Whether it was out of derision or embarrassment we do not know. News of his dancing ability spread. In time, Kamāmalu, the favorite queen of Liholiho, heard about him and summoned Puaʻaiki to become the court jester. “You shall dance for us when we wish,” she said. “For this you will receive food and ʻawa (drink)” (Ibid.).

And so it was that he would dance for the queen and her court. In spring of 1820, the royal residence was moved from Kailua, Kona on the island of Hawaiʻi to Honolulu, Oʻahu. Once on Oʻahu, Puaʻaiki’s health began to decline. He found himself unable to stand and was not able to dance for the queen anymore. Soon the food and drink ceased to arrive.

He returned Maui. It was during this time a young Hawaiian man named Honoliʻi came upon Puaʻaiki, who was laying on the ground in a grass hale or house, moaning. Honoli‘i was one of four Native Hawaiians who were on born the ship Thaddeus when the first missionary company arrived in Hawaiʻi in 1820.

Flies swarmed over Pua‘aiki‘s sightless eyes; lice crawled up his beard. His small, twisted body was clad only in a tattered malo made out of kapa, a native bark and a dirty bit of a ragged kīhei or covering (Ibid.).

“Listen to me, Puaʻaiki,” he continued, “I have good news for you. Forget about ʻawa root to deaden your pain. That will not heal you. But there is someone who can heal you. He will cure your sickness. He will make you well. He is the Great Physician.”

Puaʻaiki stiffened and raised his head abruptly, staring at Honoliʻi as though he could see him. “The Great Physician!” he said and then asked, “What is that?”

Within seven months of his commissioning, a stomach disorder which had troubled him in earlier years, returned. His health began to decline. He died seven months later on Sunday evening, September 17, 1843 at the age of 58.

Whether or not he was able to visit all of the churches under his care during that brief period of time, we do not know. But it is very likely that he came to us here in Mākena. After all this was the district known as Honuaʻula and in the early years the church was known as Honuaʻula. In later years the name was changed to Keawakapu and still later to Keawalaʻi.

Our reading from The Gospel According to Mark is about the story of Bartimaeus. Both Bartimaeus and Batimea – one a court jester and the other a blind beggar - were desperate to meet Jesus. Bartimaeus shouted from the roadside calling out to Jesus. When others sternly ordered him to be quiet, he cried out even more loudly.

A headstone in the graveyard of Kaʻahumanu Church in Wailuku where Batimea is buried reads: “Batimea Lalana Puaʻaiki. Born about 1785 in Waikapū, he became a Christian in 1843 in Wailuku. He became known as The Blind Preacher of Maui who proclaimed, ‘I once was lost, but now am found. I once was blind, but now I see.’”

It is possible then that Honoliʻi, Batimea’s good and dear friend, may be as close to him in death as he was in life. There is no doubt that Batimea remained indebted throughout his life to Honoliʻi.

We see that depth of gratitude in Bartimaeus. It is a departure from the normal pattern of healing stories in The Gospel According to Mark which usually ends with Jesus sending away those who are healed with the command to be silent (Mark 1:44; 5:19, 37, 43; 7:36; 8:26). Having been granted his sight, Bartimaeus can do nothing but follow Jesus, the one who brought the good news of God’s kingdom to bear in his life in a tangible way. (Feasting on the Word, Year B, Volume 4, Bartlett & Taylor, Westminster/John Knox Press, 2009, page 21

The evening at Fenton’s came to an end. I said goodbye to a new-found friend as she joined another friend who was going to drive her to her home.

May we see each other and others with the same eyes.