“The Coming Reign of God”


It was the week of my graduation from the Kamehameha Schools Kapālama Campus on the island of Oʻahu in 1967 when the Six-Day War occurred between Israel and an alliance of Arab nations that included Egypt, Syria, Lebanon, Jordan and Iraq. The war broke out on June 5th and ended on June 10th.

It was a decisive victory for Israel that resulted in the capture of the Sinai Peninsula, the Gaza Strip, the West Bank, the Old City of Jerusalem, and the Golan Heights. Since then the status of these territories has become a major point of contention in the Palestinian-Israeli conflict that continues to this day. 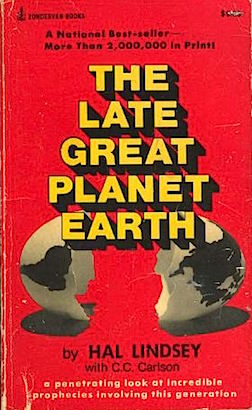 In 1970, Zondervan published Harold Lee "Hal" Lindsey’s first and best-known book, The Late, Great Planet Earth. Coming only two years after the Six-Day War, the book became widely popular among those who were certain the world was coming to an end and that Jesus’ return was imminent.

Lindsey’s own writing found resonance in the teachings of John Nelson Darby (1800-1882) and the Plymouth Brethren Movement. The movement, which originated in Dublin, Ireland and flourished in Plymouth, England, almost two centuries ago held to the belief that God has chosen to relate to human beings in different ways under different Biblical covenants in a series of “dispensations” or periods in history.

Darby, Lindsey, and others hold the view that the Bible contains not only an account of past events but predictions of the future. The temptation they all face is to assign a timeline based on their interpretation of the Bible in light of social, political, economic and religious events occurring in the world.

More recently Cloud Ten Pictures released the film Left Behind: The End Begins. The film opened in theaters across the U.S. and overseas and stars Nicholas Cage in a lead role. The film is based on LaHaye’s and Jenkins’ novels.

The film dramatizes the disappearance of millions of people who vanish without a trace. All that remains are their clothes and belongings. In an instant, terror and chaos spreads around the world. The vanishings cause unmanned vehicles to crash and burn. Planes fall from the sky.

There is devastation everywhere. There is no one to help or provide answers. In a moment the entire planet is plunged into darkness. The end is near.

The film makes for an apocalyptic thriller, but as with Darby's and Lindsey's writings, LaHaye and Jenkins find themselves faced with what the Bible makes clear. Jesus said, “...about that day or hour no one knows, neither the angels in heaven, nor the Son, but only the Father. Beware, keep alert; for you do not know when the time will come.” (Mark 13:32-33; Acts 1:7; 1 Thessalonians 5:2; 2 Peter 3:10; Revelation 3:3)

Whatever predictions we may wish to make about what we understand to be “the end of the world” or “the coming reign of God” may be much less significant than the need for us to be watchful of and awake to the ways in which we live our lives as people of faith now. (Matthew 24:36-44) Our reading from The Gospel According to Matthew provides us with the basis upon which our community of faith is to be established – here and now – and not in some near-distant or distant future.

Our reading begins the fifth and last of the major sections of teaching in Matthew and has at its center the apocalyptic speech that follows in chapter 24. In 23:1, the crowds are included in the audience for what Jesus is about to say. (Preaching Through the Christian year A, Craddock, Hayes, Holladay & Tucker, Trinity Press International, Harrisburg, Pennsylvania, 1992, page 498) It is possible that Matthew is joining this section to the preceding section as he looks upon the multitude that gathered during Jesus’ debate with religious leaders in the synagogue.

In other words, in Matthew 23:1-12 Jesus is talking to his church, and especially its leaders. He denounces the scribes and Pharisees in verses 13-39 but in chapter 24, verse 1 it becomes even more explicit that his words are all meant for the disciples.

What is Jesus saying to the church and in that regard what he is saying to us today? He warns against arrogance and self-exaltation among the leaders in the faith community. He does this by pointing to the scribes and Pharisees as examples of how not to be. (Ibid.)

Jesus does not question their understanding and devotion to the teachings of Moses. That they were successors to Moses as teachers of Israel is accepted and affirmed. (Matthew 23:2-3). (Ibid.)

The warning points to two glaring weaknesses among the scribes and Pharisees: the failure to practice their teaching and their love of place and honor. A closer look at his warning reveals that his rebuke seems to be general in nature, suggesting that not all of the religious leaders were guilty. (Ibid.)

Jesus made similar warnings when he spoke to the multitudes on the mountainside before returning to the Temple. (Matthew 6:1-18) The same problems were noted: love of special greetings as well as places and titles of honor.

Matthew’s denunciation of the scribes and Pharisees is not intended to provide us with an opportunity to say of ourselves, “We thank God that we are not as they are.” The problem Matthew is highlighting is one that has plagued the church, then and now – and that is the love of place and preference among the servants of God. (Ibid.)

The restrictions Jesus calls for in our text are severe. They allow no titles. In some groups, pride and love of recognition show up. I shared with you last Sunday that I had an opportunity to visit First Congregational Church in Williamstown, Massachusetts several years ago. I noticed at the church what I had also observed in other churches on visits to other parts of New England over the years. The seating was arranged in such a way that the floor was divided in sections so that there was seating in areas that were sectioned off one from the other. I was told that it was done as a way to provide heat during the winter months.

Heating vents on the floor allowed for the warmth to be contained within various sections. But, I was also told that the “boxes” were reserved for families who were members of the church. Name plates were attached on a rail to the entrance of each section. Although it was not said directly, it became apparent that distinctions were made about one’s station in life.

Like the scribes and the Pharisees, we are all susceptible to the world’s allure of fine clothes, places of honor and best seats. Jesus makes clear to the disciples who were with him at the Temple that day and he makes clear to us “that it is not by privilege, place and preference but by obedience, humility, and service that the community of faith is established.” (Op. cit., page 491)

If we want to know what the coming reign of God will look like we need to look at how we live our lives in what we say and in what we do. We need to be awake and alert in living a life of faith in service to others.

I received a letter in the mail the other week from a former member of our church family and resident of Maui.

“At our church here in California, I volunteer to help those less fortunate than ourselves. We help individuals that are homeless, have medical or mental problems, are without work, are divorced with or without children, have or have had drug problems and have difficulty paying bills and are hungry and in need of clothes. The needs far outstrip the contributions from the congregation. (But) we ... do our best.”

Such is the “coming reign of God.” We do our best by living a life in service to others as we embody the presence of God in Jesus Christ in our world today.

We do not to sit and wait in anticipation for the end to come. Instead, we choose to stand and live alongside those in need.