In 2004 Lynne Truss’ book on The Zero Tolerance Approach to Punctuation made the bestseller’s list of the New York Times. Truss, a British writer, was struck by the tragic state of punctuation in the English language in the United Kingdom and the United States. The chapters in her book cover apostrophes, semicolons, colons, exclamation marks, question marks and quotation marks. 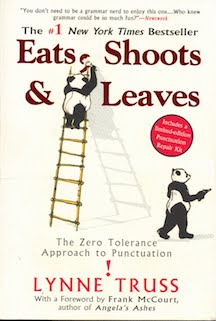 Other chapters cover italic type, dashes, hyphens, brackets, ellipses and commas. In what has become a classic joke about bad punctuation the following story is told: “A panda walks into a café, orders a sandwich and then draws a gun and fires. When asked why he did that by a waiter in the restaurant, the panda produces a badly punctuated wildlife manual and tosses it over his shoulder.

The waiter turns to the relevant entry in the manual and, sure enough, finds an explanation. ‘Panda. Large black-and-white-bear-like mammal, native to China. Eats, shoots and leaves.’”

It would seem the punctuations we make in our lives – whether in writing or speaking or in how we live our lives – matters. We know that pandas eat bamboo shoots and leaves. Even if the story included a reference to bamboo and the comma remained, the end result would be the same. We would still have an armed panda bear on the loose.

It could be said that the significance of the story of Zacchaeus the tax collector is based in part on its strategic use of commas. But rather than bad punctuation, it would seem that the commas give the story a somewhat ambiguous meaning.

“(Zacchaeus) was trying to see who Jesus was (comma), but on account of the crowd he could not (comma), because he was short in stature.” (Luke 19:3) Centuries ago there was some debate and discussion in the early church about a concern over Jesus’ stature.

The Greek text as well as most English translations suggests that the phrase - “because he was short in stature” - refers back to Jesus and not Zacchaeus. Early critics of Christianity insisted that to say Jesus was short in stature would have been contrary to what one would expect in a Son of God. (Preaching Through the Christian Year, C, Craddock, Hayes, Holladay &  Tucker, Trinity International Press, Harrisburg, Pennsylvania, 1994, page 460)

It may be that both Jesus and Zacchaeus were short in stature and that in a way they may found an immediate kinship with one another. You can imagine my own delight with the story whenever I am reminded that I am short at 5 feet 4 inches.

Whatever the case may be the episode in Luke is a story of conflict and salvation. Despised by his neighbors for being a chief tax collector for the Romans, all of them begin to grumble openly as they watch Zacchaeus welcome Jesus into his home. Zacchaeus immediately makes the decision to give half of his possessions to the poor and pay back four times as much to anyone he has defrauded.

That’s not the kind of decision it would seem most would be willing to make today. But Zacchaeus’ response is prompted by Jesus acceptance of him. Jesus calls him by name. He recognizes and manages to silence the crowd when he reminds Zaccaheus that “(you are) a son of Abraham,” both in spirit and descent. (Luke 19: 9)

Our reading from The Book of Habbakuk is also a story about conflict and salvation, but this time not for a person but for a people. Habakkuk is identified as a prophet who “complains to God about the presence of evil and suffering, and the fact that the wicked overpower the righteous.” (Op. cit., page 427)

His complaint is about the struggle we often face with why a just God is “silent when the wicked swallow those more righteous than they.” (Habakkuk 1:13). Perhaps Habakkuk’s complaint is not unlike those who complained about Jesus’ association with Zacchaeus.

This time it is not a conflict between the Hebrews and the Romans but between the Hebrews and Assyrians. (Ibid.) And there is a further difference. Where Habakkuk celebrates the appearance of God to intervene against the nations by destroying them to bring salvation to the people, Jesus intervenes in the life of Zacchaeus to bring salvation to his house not through vengeance or wrath but through love.

I received a catalogue in the mail the other week from Hudson, Ohio. It was the 2013 Holiday Preview for “gifts that inform, enlighten and entertain.” Among the items are quotable quotes on posters, mugs, handbags, pillows, cards and tee shirts.

The one item that caught my attention was an exclusive offer made only in the catalogue. Three phrases appear on the tee shirt. The third phrase below a line serves as an explanation for the first two and it reads: “Commas Save Lives.”

The first line without a comma, reads: “Let’s eat Grandma.” The second phrase with a comma reads, “Let’s eat, Grandma.” In some ways it is a shocking statement but we can all appreciate the difference and significance of where a comma is placed in a sentence or a phrase.

Clearly commas save lives if we were only telling stories about grandmas and pandas. But at this table where the bread and the cup have been prepared, what saves lives is the transforming love of God in Jesus Christ.