"Leading A Life of Service"

He was born seven months ago. I met with his mom and dad yesterday in preparation for his baptism next month on New Year’s Eve Sunday.

His mom said after several hours of labor she opted for an epidural. Once it was administered to provide relief from pain, it took all of ten minutes for her to hānau, to give birth to her son.

Both mom and dad took parental leave at various times over the course of the first three months to be with their newborn son. Mom reported that except for getting up once during the night to feed him, he slept through the night and has turned out to be “pretty mellow” baby.

Dad did not disagree.

After six months, we may question whether it has been a matter of nature or nurture that he’s turned out to be a “pretty mellow” baby. We may wonder if he is predisposed to be like his father in temperament through simple genetics or if he has already managed to observe his father’s behavior and decide to emulate him.

Whatever the case may be, his parents are happy about their son’s disposition. During our visit, mom picked up her cell phone and found a video of him staring with eyes wide open, pumping his arms up and down and kicking his feet while giggling at his father.

Dad was holding the cell phone in his hand and mom was holding him up facing the camera. She can be seen smiling in the background. Dad cannot be seen or heard but from what can be seen of his son’s expression and laughter, it is obvious that he was “making faces.” 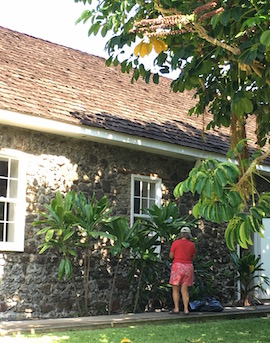 In his letter to the church in Thessalonica, the Apostle Paul reflects on the nature of his ministry among the Thessalonians when he was first with them. No cell phone video, just a letter filled with his aloha and affection for those in the church. He likens his relationship with them to “a father with his children.”

He reminds them that it was his practice to work to support himself financially, not to burden them and that his labor and toil among them was for the sake of sharing the gospel. He goes on to also remind them of “how pure, upright and blameless” his conduct along with Silvanus and Timothy, was toward them (1 Thessalonians 2:10).

Biblical scholars tell us that the importance of personal examples was well understood in the Greek and Roman world in which Paul lived.

In an earlier age of Cynics, the words of Julian the Apostate (BCE 363) may well apply to leadership in the civil and religious societies of our day and time. Although Julian rejected Christianity, he was regarded as notable Greek philosopher and author. (Preaching Through the Christian Year A, Craddock, Hayes, Holladay & Tucker, Trinity International Press, Harrisburg, Pennsylvania, 1992, page 496)

He wrote the following with regard to the importance of personal examples of pure, upright and blameless conduct of those in positions of leadership: “Deeds with them came before words, and if they honored poverty they themselves seem first to have scorned inherited wealth; if they cultivated modesty, they themselves first practiced plain living in every respect; if they tried to expel from the lives of other men (sic) the element of theatrical display and arrogance, they themselves first et the example by living in the open market places and the temple precincts, and they opposed luxury by their practice before they did so in words (Oration 7.214, as cited in A.J. Malherbe, Moral Exhortation: A Greco-Roman Sourcebook, Westminster, Philadelphia, 1986, page 39).

But the Apostle Paul is even more pointed in his remarks comparing his relationship with those in the church in Thessalonica to that of a “father with his children” (1 Thessalonians 2:11). He describes his aloha for the Thessalonians with the striking image of a wet nurse (1 Thessalonians 2:7-8) from last Sunday’s scripture reading to another “intensely personal and intimate” image this week.

Paul saw himself as the father of the churches that grew out of his ministry and of those who became Christians (1 Corinthians 4:14-15, 17; 2 Corinthians 6:13; Galatians 4:19). It is said that he could be stern in rebuking immature behavior (1 Corinthians 3:1-4), but also tender in nurturing growth (1 Corinthians 4:14). In presenting himself as an exemplary father, Paul also conformed to personal examples that were also understood in the Greek and Roman world. (Op. cit.)

The Greek orator Isocrates wrote in the fourth century of such an exemplary father: “Nay, if you will but recall your father’s principles, you will have from your own house a noble illustration of what I am telling you. For he did not belittle virtue nor pass his life in indolence; on the contrary, he trained his body by toil, and by his spirit he withstood dangers. Nor did he love wealth inordinately . . . neither did he order his existence sordidly . . . I have produced a sample of the nature of Hipponicus (the father), after whom you should pattern your life as after an example, regarding his conduct as your law and striving to imitate and emulate your father’s virtue; for it were a shame . . . for children not to imitate the noble among their ancestors” (To Demonicus 9-11).

It is clear that Jesus is talking about the Pharisees and the leaders of the synagogue and that his disciples are the intended audience to whom he is speaking. Jesus does not question the teaching of the Pharisees and scribes, but he is quick to caution the disciples by saying to them: “ . . . do whatever they teach you and follow it; but do not do as they do, for they do not practice what they teach” (Matthew 23:3).

Jesus is well aware that the scribes and Pharisees were skilled in and devoted to their understanding as interpreters of the law of Moses (Feasting on the Word, Year A, Volume 4, Bartlett and Taylor, Westminster/John Knox Press, Louisville, Kentucky, 2011, page 260). He accepts and affirms that they were the successors to Moses as teachers of Israel.

But Jesus warns the disciples of the glaring weaknesses among the leaders – their arrogance and self-exaltation and their failure to practice their teaching and their love of place and honor. It would be fair to say that such weaknesses are also evident in not only religious leaders but in civic leaders who are in public service.

We are reminded of how easily we give in to our love of wanting to have a place of honor at public gatherings, the best seats in the church and in the synagogue, and to be greeted with respect for the positions we hold by virtue of the titles we carry. We see how susceptible we are in succumbing such temptations. We see it in ourselves and we see it in our leaders, both religious and civil.

Matthew is not simply providing us with a Jesus who is content on reciting the flaws found among the religious leaders of his day. It is a problem that has infected us all – whether we are in public service or in service to the church, when our love of place and preference supersedes our love of service to others.

Jesus said, “The greatest among you will be your servant. All who exalt themselves will be humbled and all who humble themselves will be exalted” (Matthew 23:11-12). The greatest among us will not be those in positions of power or privilege. The greatest among us will be those living and leading a life of service to others – whether here at Keawala‘i through our mission and outreach work or our caregiving group or out in the wider community - at Hale Kau Kau or with Feed My Sheep; with the Friends of the Library or at Hospice Maui; with The Maui Food Bank or Aloha House; with Kaunoa Senior Center or Friends of the Children’s Justice Center of Maui.

As I watched the video of a baby boy giggling and smiling at his father and how his parents have concluded that he is, indeed, a “pretty mellow” baby, it occurred to me that he may well imitate and emulate his father’s virtue. I am convinced that he will grow up with the same measure of humility as his father who is himself a public servant.

We are mindful as we gather around this table to share in the eating of bread and the drinking of the cup that the God we have come to know in Jesus Christ calls us to accept the cost and joy of discipleship, to servants in the service of others and for that we give thanks.

Let us pray: Ke hele aku la i kēia manawa e mana‘o nui nei e pā i kou ‘Uhane i hiki ke ho‘omau i ka hana no kou aupuni. We come now, O God, longing to know the touch of your Spirit that we may be encouraged to serve you in the world.