Grandma lived in Philadelphia. She was a wife, a mother and a grandmother. By the time we had met her husband had already died. She was a widow.

I wondered how she managed to live on her own. There were family members who kept an eye out for her offering their care and support.

She continued to live in the modest home in which she and her husband had raised their children. I assumed that she had Social Security benefits and other financial resources to make that possible but I also assumed that at times it may have been a bit of a challenge. 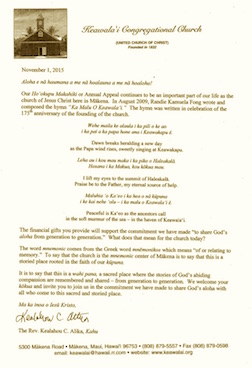 Each year – around this time of the year - a letter is sent out to over 2,000 members and friends of Keawalaʻi inviting each to offer their financial gifts to support the ongoing ministries of this church. The gifts are in response to our annual Hoʻokupu Makahiki or Annual Appeal.

Grandma was on that mailing list. Late in her life, I received a card in the mail one year. She apologized and said that she was not going to be able to send any money.

She continued, “But I knit several pairs of woolen mittens every year for our holiday fundraiser here at our church. I think they make the perfect holiday gift.”

I was deeply moved by what she shared. She wasn’t calling attention to herself. There was no - “Look and see the good I am doing!” There was no boasting, only an expression of joy.

I wrote her a letter thanking her for her generosity of heart and spirit. Grandma reminded me of the many ways in which we can support the ongoing ministries of the church in Philadelphia, here in Mākena and beyond.

Grandma’s holiday fundraiser included the mittens she knitted but they also included the donation of household goods, clothing and other items. It was, as someone said, “a sort of gleaning, an alternative economy that emerges as people pick up the discarded abundance of their neighbors – like Ruth, who gleans in Boaz’s fields” (Reflections on the Lectionary, Carol Howard Merritt, Christian Century, October 28, 2015, page 21).

Care for widows, orphans, the alien and the poor was and is a hallmark of Jewish faith. The Hebrew Scriptures make clear that this was the expectation and practice meant to provide for those in need (Deuteronomy 14:28-29, 15:11, 24:19; 24:21).

It was something Jesus knew and understood. That same expectation and practice: to provide for those in need was and is a hallmark of our own Christian faith.

For those who have heard or read the story of Ruth, there are some things not mentioned directly in the text. But Boaz seems to provide some details that may have gone unnoticed had he not cautioned Ruth with the following instructions:

“Keep your eyes on the fields.” “I have ordered the young men not to bother you” (Ruth 2:9)

Then Boaz instructs the young men who were working the fields to be mindful of Ruth. “Do not humiliate her” and “Do not scold her” (Ruth 2:15-16)

In many ways Ruth was not unlike the unnamed widow whom Jesus encountered in the Temple one day. The word used for “widow” in Hebrew Scriptures is a word that means “silenced one” or “one who has no voice.”

In Ruth’s day and in Jesus’ day, a woman usually lived under the authority of a male – her father, her husband, her son, or her brother. A woman was very vulnerable to being exploited by men, even assaulted.

If a woman’s husband died and there was no son or brother or father to take care of her, she became a shunned woman. Naomi, Ruth’s mother-in-law, knew this and in time Ruth came to understand that as well - that they were both women without power, without rights, without a voice (Seasons of the Spirit, Pentecost 2 2015, Wood Lake Publishing Inc. 2014, page 145).

As the social, economic, cultural and religious structures that supported them collapsed with the death of the men in their lives, Ruth and Naomi and the unnamed widow whom Jesus saw at the Temple one day were essentially left with nothing. Yet, remarkably all three women refused to simply become victims (Op. cit., page 141).

“The story of the poor widow giving her two coins to the Temple treasury has long been interpreted as Jesus’ commendation of sacrificial giving.” Like her, we are encouraged to give not out of our abundance but out of our substance.

The story of the poor widow happens immediately after Jesus assails the practices of some of the religious leaders in the Temple, those whom he says “devour widow’s houses” and attempt to disguise their greed in the vestment of saying long prayers and public appearances meant to call attention to themselves (Mark 12:40). The widow, who is the object of Jesus’ teaching, does not receive his praise for her actions. Even though he does not say anything to her directly, we understand from Jesus’ remarks that her giving is an example of good and generous giving.

But more importantly, it is also a testimony to the injustices faced by widows, orphans, aliens and the poor. Her gift is contrasted with those of the rich. Those who placed large sums into the Temple treasury probably calculated what they could give guided by the Temple laws.

For the widow there was no calculation. The Greek word used for the coins that she had is lepton. It was the smallest coin in circulation at the time. It is said that it took 4 to 8 of these coins to make a penny.

Jesus makes clear that she was not only a widow, but that she was a poor widow, in fact, that she was the poorest of the poor. She had two lepton which meant that she could have kept one of the two coins (Op. cit., pages 141, 145)

Instead she gave both coins and in doing so, she gave “everything she had, all she had to live on” (Mark 12:44). In Greek, it is said that this verse literally reads that she gave “her whole life.” Biblical scholars contend that her gift foreshadowed the one Jesus was about to make in offering up his very life for our sake and for the sake of the world (2 Corinthians 8:9). Other scholars contend that perhaps it was no coincidence that right after witnessing this injustice Jesus predicted the destruction of the Temple (Mark 13:1-8).

She lives in Kahului not in Philadelphia. She is not a grandmother but a single mother with four children “fathered” by three different men. Three of the four are girls, ages 11, 7 and 2. The fourth is a boy who is 5 years old.

Not too long ago Maui Electric Company sent a notice of termination. Her electricity was about to be cut off. There are no extended family members to help and the “fathers” abandoned their responsibilities long, long ago.

There is no doubt that some of us may question her choice of a potential companion. Some of us may be resentful that she has the benefit of having a place to live at the expense of the taxes we pay.

If we are inclined to think more highly of ourselves when we consider the long hours we work and how hard we work in order to have what we have, we face the danger of being no different than the scribes who walked around in long robes and had the best seats in the synagogue and places of honor at banquets. Jesus noticed the unnamed widow just as he notices other unnamed women throughout his ministry. He noticed the poor, those despised and abandoned.

In remembering Ruth and Naomi, in remembering the unnamed widow and grandma in Philadelphia, we see a faith that in all of them that is daring and courageous. It is a faith that we are called to embody for ourselves, a faith in which we affirm that God is present in the resilient hope that emerges from the least of those among us.