In late July, a tropical disturbance began forming in a low-pressure area off the coast of southwestern Mexico. The National Hurricane Center began tracking the development of a system of thunderstorms. On July 31, 2014, the center detected tropical storm-force winds.

By August 2, 2014 widespread precautionary measures were being taken all across Hawaiʻi as weather forecasts indicated that Hurricane Iselle, the eleventh storm of the Pacific Hurricane Season, was on course to make landfall on Hawaiʻi island within a few days. Its westerly course allowed for it to gradually strengthen and it did. On August 4, 2014, Iselle reached peak intensity with maximum sustained winds of 140 miles per hour, making it a Category 4 hurricane.

But thankfully over the next 24 hours Iselle encountered weather conditions that caused it to quickly weaken into a tropical storm of moderate intensity. Iselle made landfall on the southeast coast of Hawaiʻi island on August 5, 2014. 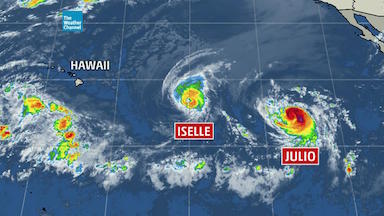 As the storm tracked closer to Hawaiʻi island, hurricane watches were extended as far westward as Kauaʻi and Niʻihau. Meteorologists based the projected path of the hurricane on their computer models. They were quick to explain that the path could change. No mandatory evacuations were planned but we were all aware of the need to prepare for the worst and hope for the best.

Residents of the Pahoa area bore the brunt of the storm. As for the rest of the islands we were fortunate to be spared serious damage from strong winds, torrential rains and the surge of ocean waters.

Having lived through other hurricanes and more recently the tsunami that was generated by the catastrophic Tōhoku earthquake in Japan in 2011, we were all faced once again with the inconvenience of waiting in lines to pick up medications and to buy gas, bottled water, toilet paper and the rest. As inconvenient as it was to deal with the crush of people at gas stations, pharmacies, and supermarkets, we knew that what was important was not watching and waiting for the hurricane, but preparing for its arrival.

The cataclysm of natural disasters, like hurricanes, can leave us feeling like the world is coming to an end. The total destruction of villages, towns and cities from such disasters often become apocalyptic in scope.

What is prominent in our reading from The Gospel According to Matthew is the reality that Jesus’ life and ministry are coming to an end. For the disciples and others it would seem that the world itself was coming to an end.

The uncertainty of the future was what troubled them. Jesus sought to reassure them. Through the parable of the wise and foolish bridesmaids, he emphasized the need to be prepared.

In the first verse of our reading, “the word ‘then’ tells us that the story concerns the future, and in this case, the future that governs the discussion from chapter 24:36 to chapter 25:46 – the certain but uncertain final day and hour.” (Preaching Through the Christian Year A, Craddock, Hayes, Holladay & Tucker, Trinity Press International, Harrisburg, Pennsylvania, 1992, page 507) In verse 13, the exhortation to keep awake and to watch is a commentary not just on the parable but on all of chapter 25 and the concerns about death, the end of the world, the ultimate destiny of humankind, Jesus’ return and the Last Judgment.

Some Biblical scholars contend that the church Matthew was addressing was under enormous stress from religious and government authorities. Convinced that the world was surely coming to an end and that Jesus’ return was imminent, they were faced with the problem of how to live and work as Christians in view of the delay. (The Art of Parables: Reinterpreting the Teaching Stories of Jesus in Word and Sculpture, Charles McCollough, CopperHouse Books, 2008)

The delay triggered a series of events ending in the exclusion of those who were unprepared. In looking back, we do not know how widespread and how intense the expectation was of Jesus’ return. Still, we can assume that such an expectation lay at the heart of the faith of many in the early church. (Ibid.)

In Jewish tradition, oil is a metaphor for righteousness or good deeds (The Jewish Annotated New Testament: New Revised Standard Versions Bible Translation, page 46) A lit lamp in the Bible is a symbol for good deeds: being a “light to the world,” “a lamp unto my feet” (Psalm 119:105); not hiding one’s lamp “under the bushel basket” (Mark 4:21).

Thus the bridesmaids who have their lamps ready, with enough oil to burn to light their way, symbolize being ready with good deeds. (Seasons of the Spirit, SeasonsFUSION, Season of Creation, Pentecost 2, 2014, Wood Lake Publishing Inc., 2013, page 147) What becomes important about the end of time and Jesus’ return is that we do not simply wait and watch. What we do is prepare ourselves by putting our faith into action.

There is a bumper sticker out on the road somewhere on Maui that I saw a few years back that said, “Jesus is coming soon, get busy.” But doing the work of faith is not about “getting busy.” The Apostle Paul cautioned those who were in the early church in Thessalonica: “We hear that some among you are leading an undisciplined life, doing no work at all, but acting like busybodies.” (II Thessalonians 3:11)

In his own reflections of the 25th chapter of Matthew, the Rev. Dennis Sanders, pastor of the First Christian Church (Disciples of Christ) of St. Paul in Mahtomedi, Minnesota writes: “Chapter 25 is filled with stories about the end of time and about being prepared for that great day. Jesus asks his listeners whether, at the end of time, they will be ready . . . He doesn’t say when he will return. So we are called to be present in the here and now, to live as if Jesus’ return will happen today.”

“We are called to live as if the Lord’s day is happening now – to tend to the sick, help the poor, and make disciples. We are called . . . to be ready now, not just ready for that great day in the future. God can arrive in many ways in the here and now, in how we care for the stranger and for one another.” (Reflections on the Lectionary, Dennis Sanders, Christian Century, October 29, 2014, Congers, New York, page 21)

Even as Hurricane Iselle was downgraded to a tropical storm, the National Hurricane Center announced that Julio, a Category 3 hurricane, was headed our way. Thankfully, Julio passed by 200 miles north of our islands. Had Hurricane Julio also made landfall, our preparations for Iselle meant that we were already prepared for its arrival.