The wharf and pier at Keauhou Bay south of Kailua, Kona on the island of Hawaiʻi are still there. Whenever I have a chance to return to Kona I always include a visit to the bay. 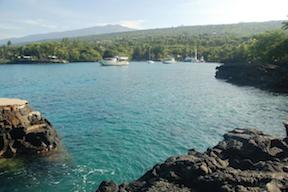 My maternal grandmother Julia Kawewehi and my Uncle Clifford Alika are buried across the bay from the wharf in a family plot where Kaʻiliʻilinehe, a church, once stood. My childhood days were spent at the bay long before the area was developed into a resort that now includes a hotel, several condominiums, a golf course and a shopping center.

The fishing canoes that once lined the bay are gone. The original road to the wharf no longer exists. The bay, once filled with fish and marine life, is now covered with silt.

But my memory of the bay remains. It was there where I learned to fish with a bamboo pole. It was there that I remember my mom and my uncles harvesting wana or sea urchins.

That was hardly the case when I received my first lesson around the age of eight. I was pushed off the edge of the wharf and told, “Swim.”

Someone must have thought I was ready but at the time I imagined that I was about to face a certain death. I had looked over the edge of the wharf on other occasions. I could always count on seeing manini, mamo and other fish darting back and forth.

That didn’t bother me so much. What bothered me was what I couldn’t see below the surface of the water. The water was clear but it was also very deep.

The bottom was lined with boulders. The sunlight that filtered down below the surface of the water would cast a series of shadows and make it all but impossible to recognize if there was any danger lurking nearby.

I suppose one could say that fear of the unknown would be motivation enough to compel anyone to “walk on water.” But on that eventful day when I was pushed off the edge of the wharf, “walking on water” was not an option for me. I knew how to “dog-paddle” – not very well – but well enough to know that I was going to be fine.

After swallowing a few gulps of water and relaxing to catch my breath, a cheer went up from cousins who gathered to witness that fateful day. I realized in that moment it was a cheer that was familiar; that it was a cheer that went up for others who had “learned to swim” by the same method. But for me the cheer was of little comfort. I had to face my own fear of the unknown.

Today’s passages from the Bible address the challenges of living in the present even when it seems we are overwhelmed by the past and worry about the future. (Seasons of the Spirit, Pentecost 2, 2013, Wood Lake Publishing Inc. 2012, page 162) Our reading from The Gospel According to Luke could not be more timely given the current session of the Hawaiʻi State Legislature in Honolulu.

For some there is only fear of the unknown and worry about the future. But whether in Honolulu or in Jerusalem, it would seem that controversy would not be something new to Jesus. As he enters Jerusalem in the final week before his crucifixion, Jesus becomes engaged in a series of confrontations with religious leaders.

In our reading from Luke, Jesus brings to bear his manaʻo or understanding of the ongoing controversy between the Pharisees, who believe in the resurrection, and in the Sadducees, who do not. The Sadducees set out to trap Jesus by asking a question about marriage.

It is their understanding that marriage is a tradition meant to ensure the continuity of the family line and to protect women who are vulnerable from widowhood. (Ibid.) Jesus enters the debate without hesitation and supports the idea of the resurrection by quoting Moses, who spoke the God of Abraham, Isaac and Jacob. He also answers the Sadducees’ “family values” question by asserting that marriage is of concern on earth, but not in heaven, and that one’s marital status ultimately does not define people in God’s eyes. (Ibid.)

I often think that when we are faced with controversies in the church we are not unlike a boy or girl who is pushed of the edge of a wharf and told to “swim.” Our own fears and worries compel us to hold on to what is familiar.

We would rather grab the side of the wharf and hold on then to push ourselves away into deeper water. We would rather secure our footing on solid ground then to dangle our feet in the open ocean. 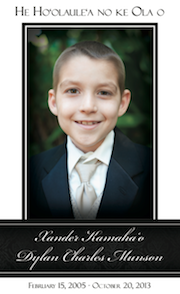 A young boy named Xander died on October 20, 2013. He was eight years old. Many, many family members and friends gathered in this sanctuary yesterday to remember and celebrate his life. I met Xander a year ago. He had already been diagnosed with cancer the year before.

His maternal great-grandmother and great grand-father were members of Keawalaʻi. Uncle Jack and Auntie Elizabeth or Auntie Kealoha or Auntie Haole, depending on how you came to know her, were here when I was called to serve the church in 1991.

Uncle Jack had fallen ill. I visited him when he and Auntie Haole lived across from Charley Young’s Beach in Kīhei. We talked about his memories of years gone by.

During our visit he decided to show me a video of a hukilau here at the church. It was shot in real time. A boat appear on the screen to the left of the screen and slowly moved across the face of the bay. Two men in a boat were dropping the net as they made their way from one end of the bay to the other. You could hear Uncle Jack’s voice off-screen narrating the proceedings.

“They are laying the net down,” he would say and then silence as the boat continued on its way. Eventually adults and children moved into the water and began pulling the net in. As the net was pulled ashore one could easily see fish tails flapping.

“No more as much fish as before,” Uncle Jack said to me as he remembered that day.

Though there was a sadness in his voice, there was also a measure of satisfaction in remembering; of holding on to memories of days gone by. I thought about Uncle Jack as we remembered and celebrated Xander’s life yesterday.

Uncle Jack lived a lifetime and more. It seemed that Xander’s time with us was all too short. But his Uncle Chuck reminded us that Xander lived his life to the fullest. “Who can say they have been to Disneyland, Disney World, Universal Studios, Legoland, and to ‘Circus Circus’ in Las Vegas at his age?” he asked. But it was not only about where Xander had gone. It was about who he had been in his lifetime – a young boy who loved his tūtū, his mom, his dad, his step-father, his older brother, his family and friends.

Xander wrote a poem at his school and received an award for his writing. The poem was called “Peace.” 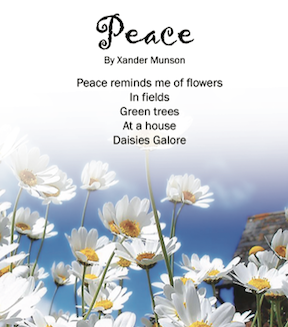 The flowers here are in celebration of Xander’s life. His poem and these flowers are gifts to his family and friends and to all of us.