"Being political, being faithful"

If what I am about to share with you sounds familiar, it is because I’ve shared this story with some of you once before. I was serving as a chaplain in a Clinical Pastoral Education program at what was then known the Pacific Presbyterian Medical Center in San Francisco. That was over forty years ago.

The medical center was known for its care of patients who were stricken with heart and respiratory-related illnesses. There was also an oncology ward at the medical center for children with cancer.

My work was with the patients who were diagnosed with heart and respiratory-related illnesses. It involved visiting patients and being on-call for 24 hours over the weekend.

On one of the visits, I met a woman who was about to undergo heart surgery.

“Good morning,” I said introducing myself, “I am one of the chaplains here at the medical center. How are you doing?”

She looked a little startled as though she was not quite sure who I was or why I was there.

“I am one of the chaplains here at the center,” I said repeating myself, “and I am just here to see how you are doing.”

She then proceeded to say she was not feeling too good. “You know, my daughter is about to undergo surgery herself. My son died after serving in Viet Nam and our trailer home just burned down.”

I listened and I could see the distress in her eyes.

My presence seemed to draw her away from her troubles. But her startled look remained. I wondered why that was until she blurted out a question:

“Are you a Chinaman?”

Needless to say I was surprised by her question.

“You ever see a Chinaman marry anything but a Chinaman?” she asked.

I was tempted to say that actually I had – even in my own family - but I didn’t.

“I am Hawaiian, Portuguese and Japanese.”

If I looked surprised by her question, she seemed even more startled by my comment.

“Well,” she said with a voice of certainty, “you know the Bible says God never intended for the races to mix.”

“Well!” I thought! As I began to feel the blood rushing to my head, I caught my breath and bit my tongue.

Somehow, I managed to get through the visit realizing that she was the patient and I was the chaplain. There would be no point in exacerbating her condition. Apparently, I was the kind of person whom she was convinced God had intended not to exist. 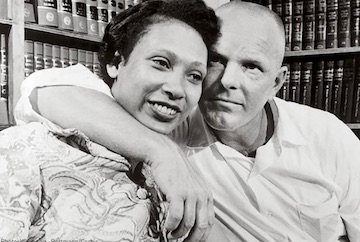 A decade earlier, I celebrated my 18th birthday on June 13, 1967. The day before - on June 12, 1967 - the U.S. Supreme Court made a decision on case number 395 Loving versus Virginia. The justices of the court determined that the State of Virginia’s statutory scheme to prevent marriages between persons solely on the basis of racial classifications violated the Equal Protection and Due Process Clauses of the Fourteenth Amendment.

About a decade before that, in the summer of 1958 two residents of Virginia, Mildred Jeter, a black woman, and Richard Loving, a white man, were legally married in the District of Columbia. Shortly after their marriage, the Lovings returned to Virginia and established their home in Caroline County.

In October of that year, a grand jury of the Circuit Court of Caroline County, issued an indictment charging the Lovings with violating Virginia’s ban on interracial marriages. The Lovings pleaded guilty to the charge and were sentenced to one year in jail.

However, the trial judge suspended the sentence for a period of 25 years on the condition that the Lovings leave the state and never return to Virginia together for 25 years. In making his decision, the judge stated what others had come to believe.

He said: “Almighty God created the races white, black, yellow, malay and red, and he (sic) placed them on separate continents. And, but for the interference with his (sic) arrangement, there would be no cause for such marriage. The fact that he (sic) separated the races shows that he (sic) did not intend for the races to mix.”

What is compelling about Loving versus Virginia is this: Some would argue that if, as people of faith, we engage in any discussion about interracial marriage and the law or any other social issues, we are being political. The story of Ruth and Naomi that we find in our reading from The Book of Ruth this morning reminds me that while we live our lives as people of faith within the church, we also live our lives as people within civil society. Being political and being faithful disciples of Jesus Christ are not mutually exclusive.

Knowing how difficult their lives would now be as widows. Naomi insists that Ruth and Orpah return to their mother’s house where they might find security (Ruth 1:9). At first, they say “No.”

When Naomi insists a second time that they return home, Orpah agrees, but Ruth refuses. But Ruth decides to remain with Naomi.

In our reading this week, Naomi makes mention of Boaz, who is a kinsman or family member through marriage. Naomi instructs Ruth to go and work in the fields alongside Boaz with the hope that they would eventually marry.

Boaz is attracted to Ruth because of her character; something he recognizes in her devotion to Naomi and her hard work in the fields. It is Ruth who invites Boaz to exercise the right of the next of kin toward her (Ruth3:10-13).

Later they must resolve their legal matters at the gate of Bethlehem (Ruth:4-13-22) where such matters are resolved. There were civil laws that governed the rights and responsibilities of relatives to one another.

Boaz fulfilled all the legal obligations and followed due process to take possession of the property and to marry Ruth (Preaching Through the Christian Year B, Craddock, Hayes, Holladay & Tucker, Trinity International Press, Harrisburg, Pennsylvania, 1993, page 461). Boaz and Ruth become husband and wife and with the birth of Obed, they become mother and father.

What is not always clear in the biblical narrative is the back story. The Moabites and Jews were semitic people and belonged to the same ethnic group. However, the Moabites were still excluded from the Jewish community (Deuteronomy 23:3-6). They were viewed as foreigners and the enemies of God (Isaiah 25:20) even though their religion and culture were very closely related to one another.

We learn, in time, Obed will become the father of Jesse and Ruth will eventually become the grandmother of Israel’s greatest king – King David – and through David’s lineage will come the birth of Jesus. It is quite remarkable that the genealogy of Jesus includes five women and among them a woman who was a Moabite.

It is not difficult for me to imagine how the woman I encountered at the medical center in San Francisco would have responded had I told her the story of Ruth and Boaz. She may well have asked: “You ever see a Moabite marry anyone but a Moabite?” One wonders if she and the trial judge in Virginia would conclude that God somehow made a mistake with the marriage of Boaz and Ruth.

Any conversation about Loving versus Virginia may seem like we are being political. Any conversation we may have about the actions of the poor widow in our reading from The Gospel According to Mark may seem as though we are being political. But one cannot read the story of the poor widow without taking into account those who are in positions of power and wealth, then and now, who prey on the poor.

The prophet Micah reminds us about the Lord requires of us: “[The Lord] has told you . . . what is good; and what does the Lord require of you but to do justice and to love kindness, and to walk humbly with your God” (Micah 6:8).

I am not sure that Mildred Jeter and Richard Loving were being political when they challenged the court over a law that was unjust, but they knew they were in a loving relationship. It would seem that Loving versus Virginia was all about loving after all.