I saw Momi a few weeks ago at an orientation and training session for those who were making a commitment to serve as volunteers with Hospice Maui. We were invited along with Father Colton and Bokushi Koga. Father Colton is a retired Roman Catholic priest. Koga sensei is the former Buddhist priest of Kahului Hongwanji who is now serving the Hongwanji temple in Hilo on the island of Hawaiʻi. We were all invited to serve on a panel of religious and cultural practitioners. 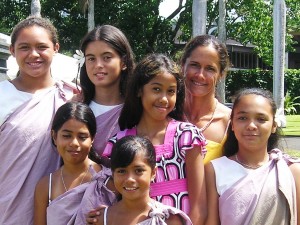 Momi is on the staff of the Queen Liliʻuokalani Children’s Center in Wailuku. In the early 1900’s the queen executed a Deed of Trust to establish a private foundation dedicated to the welfare of orphan and destitute children throughout Hawaiʻi. Preference was to be given to Hawaiian children of full or part aboriginal blood.

Over the years I have come to appreciate Momi’s knowledge and wisdom as a Native Hawaiian cultural practitioner. She spoke of her work with Hospice Maui in very personal ways, highlighting the kōkua or help that was provided when her brother was diagnosed with AIDS over fifteen years ago. At the time of her brother’s illness, the treatment for HIV/AIDS was hampered by the availability and cost of drugs that were being developed.

I received a telephone call one day inviting me to her brother’s home in Maui Meadows. When I arrived at the house Momi was there to welcome me along with her brother’s partner.

Everyone had already made their way into the bedroom of the cottage. A multitude of family members were there including nieces and nephews, siblings, cousins, grandma and others. I remember some were on the bed; others stood from one end of the room to the other holding hands. Prayers were offered as well as hugs and kisses.

A few days later her brother died. I was asked if we would do the memorial service here at Keawalaʻi. I did not hesitate in responding.

“Of course,” I said. “We can do that.” But I expressed my concern because I knew the family attended another church in Kahului. I was open to sharing the time with their pastor.

“The church we usually attend will not do the service,” she said. The church declined to assist the family because of “the issue” of her brother’s sexual orientation.

Sometime ago a colleague resigned from the church she was called to serve as its pastor. She was not filled with anger or bitterness, only with sadness and regret. In her letter of resignation she wrote, “I came to the church as a human being, I left as an issue.”

In a very real way Momi’s brother became an issue for the church. For Momi there was no issue, only a brother.

From time to time, our churches find themselves embroiled in issues. The issues may vary.

“Will you marry us?” a couple asked. “We have both been divorced and our church will not marry us!” It is hard to imagine that a divorce meant they had to have their previous marriage nullified in order to marry again. And as far as the church was concerned, children born in their previous marriages no longer existed.

“I don’t think such things should be said in church!” she insisted as she left the church that morning. It was Mother’s Day.

Someone stood up on the mauka side of the church near the front door and shared how difficult it was for him to be in church on Mother’s Day. “My mother committed suicide when I was a boy,” he said. He went on to describe his pain and sense of loss. We took some time that morning to include him as well as his mother in our prayers.

“Why would he say such a thing like that in church?” she asked to which I replied, “Well of all the places one should be able to talk about such things, why not in the church?”

On another occasion a member of the church took it upon himself to question why it was we had allowed another member, who had been diagnosed with Alzheimer’s, to continue serving as a deacon. He often looked uncertain about what to do but with the help of another deacon he would faithfully join the others in collecting the morning offering. It turns out the person who asked the question was more concerned his own sense of embarrassment about what others would think.

The issues vary but the result is always the same. We begin to see each other no longer as human beings; as sisters and brothers; as sons and daughters of God but as issues based on our gender, race, social class, sexual orientation, religion, and marital status as well as on our mental limitations and physical disabilities.

Compassion gives way to fear. Love gives way to anger. We become convinced that “the time is near when all will come to an end” because of the changes we see around us.

In our reading from The Gospel According to Luke there are those who are convinced that the end is near. Luke’s account is prompted by an earlier prediction that the Temple in Jerusalem will be destroyed.

Such words of doom led many to believe that all was about to be lost. But words of comfort, words of assurance are clearly offered. “Do not be terrified. Do not be afraid.” Even when all may seem to be at an end, God’s steadfast love and compassion will endure.

The prophet Isaiah offers us similar words of comfort and assurance. He also offers us words of hope for a new beginning – a new heaven and a new earth. Weeping and crying shall be no more. Health and long life will prevail.

No more hurt. No more destruction. It will be a time of building, of planting, of eating, of working. We go on.

In his letter to the church at Ephesus, the Apostle Paul provides us with a blueprint for building such a relationship. He writes: “The gifts (Christ) gave (to the church) were that some would be apostles, some prophets, some evangelists, some pastors and teachers to equip the saints for the work of ministry, for building up the body of Christ, until all of us come to the unity of the faith and of the knowledge of the Son of God, to maturity, to the measure of the full stature of Christ.”

“We must no longer be children, tossed to and fro and blown about by every wind of doctrine, by people’s trickery, by their craftiness in deceitful scheming. But speaking the truth in love, we must grow up in every way into him who is the head, into Christ, from whom the whole body, joined and knit together by every ligament with which it is equipped, as each part is working properly, promotes the body’s growth in building itself up in love.” (Ephesians 4:11-16)

Well over a dozen years ago my sister called and asked if I would marry her. She had been married and divorced twice before. I said yes and made the trip to Kailua, Kona on the island of Hawaiʻi. The wedding was held on the lawn of the Hale Halawai in downtown Kailua. Her son was the best man. In the years that followed she and her husband became the parents of a daughter.

Several years after that he met his fiancé through his work as a preschool teacher and educator. I said yes and travelled to Hilo, Hawaiʻi. The wedding was held beside the sea at Keaukaha with his three daughters and her autistic son in attendance.

My middle brother and his partner have been together for as long as I can remember, perhaps as long if not longer than all the combined years my other two siblings have been married. It may be that he will call and ask if I would marry him.