"Many will come in my name"

A fault line in the Atlantic Ocean tore through the seabed sending its shock waves toward the Iberian and African coastlines 263 years ago on All Saints’ Day, November 1, 1755. Directly in its path was the Portuguese city of Lisbon. At the time Lisbon was one of the wealthiest cities in the world and the capital of a vast global empire. 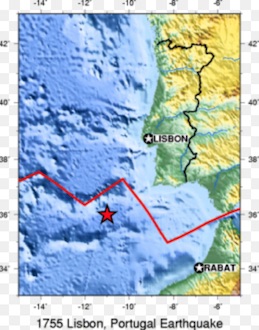 At the moment that the earthquake hit, many were attending mass to celebrate All Saints Day. By the end of the week it was reported that over 75,000 people died as a result of the earthquake, the tsunami and later the fire that swept through the city. Over 12,000 dwellings were destroyed.

In a review of Molesky’s book Emily Cataneo, a freelance writer, points out that one of the most important legacies of the earthquake was the debate it provoked among those who sought to make sense of the tragedy. Cataneo writes: “In the years following the quake, theologians, politicians, writers, and philosophers all weighed in on pressing questions: How could a beneficent, all-powerful God permit a holocaust like this? Was God to blame for the earthquake or should thinkers focus solely on understanding the natural causes of earthquakes and tsunamis? Was Lisbon’s decadence . . . to blame?” (The Christian Science Monitor Weekly, Boston Massachusetts, November 16, 2015, page 40).

There are wars. There are rumors of wars. Nations continue to rise up against nation, kingdom against kingdom. There are earthquakes and famines. Surely the disciples who were with Jesus the day he told them that the temple would be destroyed in their lifetime were convinced that the world, as they knew it, was coming to an end.

It was Peter, James, John and Andrew who asked Jesus privately about the signs that would signal that the end was near. First, he warned them about those who would lead them astray – perhaps a priest, perhaps a politician. Many, he cautioned, would come in his name.

I was living in the San Francisco Bay Area 40 years ago, when the Jamestown tragedy occurred. The Rev. Jim Jones, a charismatic “Christian”, and over 900 of his followers were found dead following the assassination of Leo Ryan, Jr. a U.S. Representative from the 11th congressional district of California at Port Kaituma in Guyana.

He had travelled to the area to investigate claims that people were being held against their will at the Peoples Temple settlement that became known as Jonestown. He was killed on the same day that Jones declared the event a “revolutionary suicide.” Some say it was a mass suicide. Others, including a few survivors, said it was a mass murder.

Many, Jesus cautioned the disciples, would come in his name.

It would seem that we live in times filled with our own challenges and doubts and many who come in his name declaring that the end is near. We find our own faith battered by fear and the cynicism of others. Rather than trust in God’s steadfast and abiding love, we find ourselves resigned to conclude that there is nothing we can do.

Our reading from The Gospel According to Mark compels us to think otherwise. Rodger Nishioka was serving as an Associate Professor of Christian Education at Columbia Theological Seminary in Decatur, Georgia when I met him at a meeting in Honolulu. . Nishioka’s own observation about what happened the day Jesus left the temple bears scrutiny in light of what we see occurring in our world today.

It would seem that we are no less tempted today to focus all of our attention on the end of the world. “There is nothing we can do” some say. Well meaning Christians are convinced that the end is near – this time – the capital of Israel has been moved to Jerusalem. Russia, the great bear, and China, the yellow horde, are on the rise. The Middle East is embroiled in conflict and blood is running through the streets of the cities.

But Jesus sets before for us a way to live. Amid whatever death or despair may envelop our world and amid the desolation and disease that may strike our own lives, we put our trust and hope in the One who is faithful. Whatever difficult times may come, they cannot outlast the God whom we have come to know in Jesus Christ.

Within a generation, the world as they knew it was coming to an end. Yet despite the signs of what was a series of apocalyptic occurrences in the life of our Hawaiian ancestors, by God’s grace, despair was transformed into hope and the emptiness was filled with new life.

We also have cause to celebrate the spiritual foundation of the early church that is rooted in the affirmation of faith made by Peter. When Jesus asked Peter, “Who do you say that I am?” Peter answered, “You are the Messiah, the Son of the living God” (Matthew 16:15-16).

Jesus answered, “I tell you . . . on this rock, (upon this affirmation of faith) – ma luna i kēia pōhaku - I will build my church.” So it is that the spiritual foundation of this church is the affirmation we share with Peter.

We may look upon the conflicts and wars and the earthquakes and famines as what must take place before the world comes to an end. But the final word is not that all will come to an end.

Instead, it is about a new beginning. Jesus said, “This is but the beginning of the birth pangs” (Mark 13:8). Rather than be overwhelmed by despair, we hold fast to the hope that is ours in Jesus Christ. While others may be anxious in wanting to usher in the end of the world, let us be anxious in preaching good news to the poor, to proclaim release to the captives and recovery of sight to the blind, to let those who are oppressed go free, to proclaim that now is not the end the world but the acceptable year of the Lord (Luke 4:18-19). May it be so.