"Encouraging and Building Up One Another"

It happened over forty years ago. At the time, none of us knew for certain what led to Milton’s death. He drowned in a river not far from the hospital unit where he was a resident under psychiatric care. 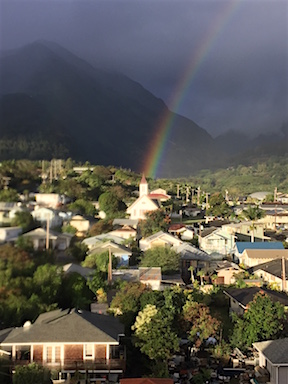 We were a part of Christian fellowship at the college we attended. In the days after his death, some of us realized that we had each had a conversation with him the week before. In each instance, we made the usual inquiry that now seems to have been perfunctory.

“How are you doing?”

He responded. “I am doing good. It’s all good.”

In retrospect I have come to the conclusion the reason Milton said, “It’s all good” is because he had made the decision to end his life. None of us knew the depth of his struggle and pain. [ Photo on the right: a rainbow forms above ‘Īao United Church of Christ, and was captured (sometime last summer) by someone whose office is in One Main Plaza, facing ‘Īao Valley. He shared it via e-mail with the church secretary and said was happy if it would be in their church's newsletter. ]

Some of us speculated that his recent conversion to Christianity was fraught with doubts and questions that troubled him. His parents were not Christians. He worried about what would happen to them “if they died before they accepted Jesus Christ into their hearts.”

We wondered if he saw his inability to “bring his parents to Christ” as a failure too much to bear. Within the fellowship, we all felt the pressure of having to “witness” to others about accepting Jesus Christ as Lord and Savior.

We would not have admitted it at the time, but it was clear that we calculated our spiritual growth on the number of people we were able to “save.” It would not be until years later that it would dawn on me that none of us were “doing the saving”; that it was by the grace of God that salvation was made possible in Jesus Christ.

In our reading last Sunday, the Apostle Paul addressed the concern of the Thessalonians about “those who have died” before the return of Christ (1 Thessalonians 4:13). What would happen to them?

As I thought about Milton this week, I do not recall if any of us found solace in the words of the Apostle Paul in his letter to the early church in Thessalonica. Paul identifies the concern of Thessalonians as “a matter of grief and fear” – something we know all too well as we struggle “to respond with both care and truthfulness about those who have died. What sustains us, according to Paul, is the central theological basis [of his letter] – hope.” (Feasting on the Word, Year A, Volume 2, Bartlett & Taylor, Westminster/John Knox Press, Louisville, Kentucky, 2011, page 280).

Within the circle of our Christian fellowship at the college, there was an enormous preoccupation with what we were certain were the signs of the “end times.” Surely, the world was coming to an end.

Somehow we missed Paul’s message of hope to those in the church in Thessalonica. We became preoccupied with imagery of “the archangel’s call and with the sound of God’s trumpet” descending from heaven and of how the dead in Christ would be the first to rise and of how we would be caught up in the clouds with them to meet him in the air and so be with him forever” (1 Thessalonians 4:16-17).

Like Paul and the early Christians, we mistakenly believed that Christ’s second coming was imminent. There was an urgency borne out of grief and fear to proclaim that the kingdom of God was at hand.

Rather than preoccupy ourselves today with “signs” that seem to indicate that the world is coming to an end, Paul reminds us that “concerning the times and the seasons,” the day of the Lord “will come like a thief in the night” (1 Thessalonians 5:1-2). We do not know the hour or the day but for Paul, Christ’s sudden return is “a settled truth” (Ibid., page 304).

Amid the doom and gloom of those who are only too eager to welcome the end of the world, Paul reminds us: “But you beloved, are not in darkness, for that day to surprise you like a thief; for you are children of light and children of the day; we are not of the night or of darkness” (1 Thessalonians 5:4-5).

Whatever “signs” darkness may come our way, we are children of light.

We see such light around us in some amazing ways. It was reported that “just hours after the November 5 mass shooting at [the] Baptist church in Sutherland Springs, Texas, hundreds of people held a vigil for the victims. Some mourned, some prayed, some held candles high. To one local resident, Mike Gonzales, the vigil’s purpose was both simple and grand: ‘to show the world that now, in the midst of darkness, there is light’” (Christian Science Monitor, November 20, 2017, page 32).

Gonzales’s “point reflects the idea that houses of worship play a larger role in society than merely a place for people to attend religious services. They are practical purveyors of hope, forgiveness, and love in everyday life. And when a sacred place, whether it be a church, temple, or mosque, is the scene of violence, those qualities of thought are evermore present and in demand. They allow people to displace the hate behind a killing rather than respond in hate.” (Op. cit.)

“Violent acts at houses of worship are committed for reasons ranging from bigotry to a desire for retribution. The 2015 massacre of nine black church members in Charleston, South Carolina was a racist act. The 2012 killing of six at a Wisconsin Sikh temple was done out of religious prejudice [the shooter apparently thinking the Sikhs were Muslims]. In the Texas killings, evidence suggests the motive was revenge” (Op. cit.)

Whatever the motives may have been in Sutherland Springs or elsewhere, Gonzales said, “The point is to show light in the midst of darkness” (Op. cit.) It may be that the “trio of protestors” who stood along the street in Wailuku last Sunday were convinced that the members of the ‘Īao United Church of Christ had fallen into darkness having called the Rev. Florentino Cordova as their pastor.

The person using a bullhorn told a reporter that they were not protesting but that he was preaching his beliefs before the morning service began (The Maui News, Friday, November 17, 2017) 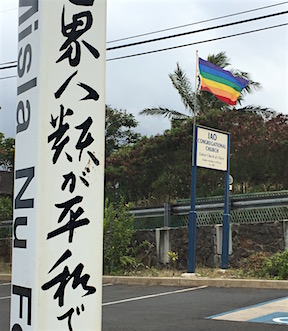 ‘Īao United Church of Christ and Keawala‘i Congregational Church, United Church of Christ are sister or partner churches to each other. ‘Īao identifies itself as an open and affirming congregation welcoming everyone including those who are members of the LGBTQ community. The three individuals who gathered that morning were apparently drawn to the church after seeing a rainbow flag flying above the church’s upper parking lot. [ Photo to right: The rainbow flag at the church's upper parking lot, which has been flying proudly there since April of this year. ]

Kahu Danette Kong, a member of our church, was there that morning as a guest to preach on what was the church’s annual Stewardship Sunday. Later that afternoon, Kahu Cordova was officially installed as the pastor and teacher of the church. Danette recorded what happened that morning before the service began and posted her video on Facebook.

The blare of the bullhorn is clear.

Paul’s warnings about the unpredictability of the time of the Lord’s return includes his admonition that we must be in a constant state of preparedness. It may be that the person with the bullhorn felt the urgency to be prepared for the Lord’s return.

I imagine the man with the bullhorn would lay claim as we lay claim to Paul’s urging that we are “to keep awake and be sober” (Romans 13:11; Ephesians 5:14) and that we are to be prepared and alert for the Lord’s coming (Mark 13:37; Acts 20:31; 1 Corinthians 16:13; 1 Peter 5:8). I imagine he would also lay claim as we would lay claim to Paul’s invitation to put on “the breastplate of faith and love . . . and for a helmet, the hope of salvation” (1 Thessalonians 5:8) (Preaching Through the Christian Year A, Craddock, Hayes, Holladay & Tucker, Trinity Press International, Harrisburg, Pennsylvania, 1992, page 513).

But what would we say or do if someone like him stood along the street outside of this church with a bullhorn exercising their freedom of speech with words that we might find offensive? If anything, it was clear that the speaker with the bullhorn at ‘Īao was not about to take to heart the admonition of Paul to the Thessalonians. Rather than “encourage one another and build up each other” as Paul would have us do, the speaker was intent on deriding and ridiculing a worshipping community.

When white supremacist Richard Spencer spoke at the University of Florida in Gainesville on October 19, 2017, white supremacists and counter-protestors gathered outside the performance arts center where he was speaking. Karen Rollins, a member of our Sunday School Teaching Team, told me about a video that showed a black demonstrator hugging a white demonstrator. The video went viral.

The black man, identified as 31-year-old Aaron Alex Courtney, told the New York Daily News: “I asked him, ‘Why do you hate me? What is it about me? Is it my skin color? My history? My dreadlocks?”

When the man looked away and avoided his questions, Courtney gave him a hug. “I reached over and the third time, he wrapped his arms around me, and I heard God whisper in my ear, ‘You changed his life,’” Courtney said.

When Courtney asked him again, “Why do you hate me?” the man simply replied, “I don’t know.”

In the video that Danette took of the man with the bullhorn, one could hear the speaker decry Kahu Cordova’s call to serve as the pastor and teacher of ʻĪao United Church of Christ: “He doesn’t know how to feed his sheep.” As Danette continued to record the event, she added a bit of commentary by pointing out that Kahu Cordova had gone up to the three men to offer them bottled water.

On the way back to the church, Kahu Cordova turned towards Danette’s cell phone camera and as he passed by, he smiled and said, “I know how to feed my sheep.” A candle, a hug, a bottle of water – “to show the world that now, in the midst of darkness, there is light.”