It’s called capital punishment, a euphemism for those who are sentenced to death for a criminal offense. It is more commonly called the death penalty. The primary method of execution in 32 states across the U.S. is by lethal injection. Some executions are by electrocution; others by gas; at least two include executions by a firing squad and one by hanging.

Hawai‘i is one of 18 states along with the District of Columbia that have abolished the death penalty. The gruesome nature of executions is not without precedent. 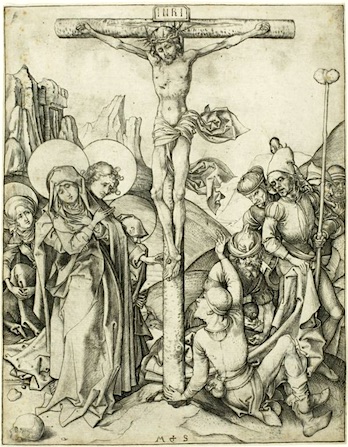 For the ancient Romans, executions employed the use of an upright stake to which the living body of a condemned person was placed to await death. The Romans added a crossbar across the top of the stake forming a T.

The executions carried out by the Romans were fairly standard. A placard was hung around the neck of the condemned prisoner. The prisoner carried the crossbar, not the whole cross, to the place of execution where the upright stake was already in place.

Often the feet were also affixed to the stake with ropes or nails. Death came slowly sometimes taking days as a result of the impact of thirst, hunger, exhaustion, exposure, and the traumatic effects of the flogging.

The Romans viewed such executions as the supreme penalty and for the historian Josephus it was the “most wretched of deaths.” Such crucifixions were reserved for “the lowest classes and the most heinous crimes.” (Harper’s Bible Dictionary, Paul J. Achtemeier, Editor, Harper & Row, Publishers, San Francisco, 1985, page 194)

Our reading from The Gospel According to Luke reveals some of the variants from the Roman procedure for the execution of criminals. Jesus’ crucifixion confirms that he was condemned by the Romans not for blasphemy but for the crime of high treason. The placard announcing that he was “The King of the Jews” was seen as a political threat to sovereign rule of Caesar the Emperor.

Clearly Jesus’ execution was seen as the most heinous of crimes. But two others identified as common criminals were also executed.

The soldiers mocked Jesus and one of the criminals derided him scoffing and mocking in much the same way as the soldiers did. By doing so, he denied Jesus’ identity as the Messiah. (Luke 23:35)

He taunts Jesus to save himself and that if he is the Messiah to save them as well. But the second criminal rebukes the other criminal. He tells him that they are getting what they deserve for their deeds. Jesus has done nothing wrong.

Remarkably and perhaps more significantly, we come to realize that Jesus’ last words to another human being before his own death were words of forgiveness and a deep and abiding love he spent his life teaching. The second criminal, aware that death is near tells Jesus, “Remember me when you come into your kingdom.” Remember me. (Luke 23:42)

We do not know what crime or crimes the two men committed. We do not know if they were incarcerated for any period of time. Jesus does not question them. He does not condemn them. But he is aware that somehow, somewhere, like sheep, they went astray.

The Rev. Dr. Nancy Westfield is a Professor of Religious Education at Drew University in Madison, New Jersey. She writes, “Jesus’ act of forgiveness while dying on the cross resounds with his teachings that forgiveness is given to all who repent and believe, even condemned thieves during their own executions.” (Feasting on the Word, Year C, Volume 2, Bartlett & Taylor, Westminster/John Knox Press, Louisville, Kentucky, 2010, page 334)

Such forgiveness is difficult for many of us to accept. We are unable to believe and trust God’s forgiving power of grace and mercy because we do not believe that others deserve forgiveness, especially the two criminals who were crucified next to Jesus.

Many in our churches have come to believe in a God of condemnation and punishment, not a God of forgiveness and love. Such criminals deserve to be punished. They deserve to die.

Westfield points out, “We would prefer if God did not love the crackheads and addicts, the adulterers, the thieves, the prostitutes . . . we would prefer it if paradise were exclusively for the nice people, the clean people, the polite people, the well-behaved people, the right people.” (Op. cit., page 336) But that is not the God we proclaim – not the nice and clean God, but the forgiving and loving God.

Maelynn Potter serves on the staff of the Sober Living Program of Aloha House. Aloha House is a primary service provider for those in recovery from drug and alcohol addiction and those struggling with mental health issues. Like sheep who hear a shepherd’s voice, so it is that they hear her voice and out of their broken lives, we also hear their voices.

(At this point of the service, Maelynn shared a story about a 45-year old man and a 41-year-old woman who went through the program. For reasons of privacy and confidentiality, we are not able to post the text of both stories.)

Through the work of the Outreach Committee of Keawala‘i Congregational Church we have partnered with Aloha House to assist those seeking to rebuild their lives. Grants provided by the committee make it possible for those seeking recovery to cover their housing and program expenses.

For over two decades the committee has quietly carried out the mission and ministry of our church through that partnership. Funds for the grants come from the various fundraising activities of the Outreach Committee – including the annual Christmas Crafts Faire & Bake Sale, the annual Silent Auction & Luncheon and the annual Golf Tournament. Funds are also received through special gifts received from donors who are members and friends of Keawala‘i.