For some of us who watched, listened or read any of the news over the last week about the terrorist attacks in Paris, it would seem that we are a world at war – again. Politicians have been quick to talk about shutting the door to Syrian refugees not only in Europe but in North America.

At least one American politician cited the incarceration of 127,000 Japanese into what was euphemistically called “relocation centers” during World War II as a reason to deny Syrian refugees the chance to resettle in the U.S. He was quoted as saying, “It appears that the threat of harm to America from ISIS now is just as real and serious as that from our enemies then” (The Maui News, Friday, November 20, 2105, A2). 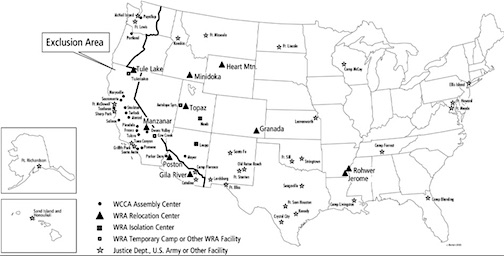 Most of the Japanese who were incarcerated in Heart Mountain, Wyoming; Manzanar and Tule Lake, California; Poston, Arizona and six other camps and numerous detention centers were American citizens of Japanese ancestry. In the years following World War II, it was determined that there was no evidence of any incidences of espionage or sabotage. But there was also very, very little, if any, signs of “mercy, justice or peace” for Japanese Americans in the aftermath of the war.

Some of you know that my father enlisted and served in the 442nd Regimental Combat Team during the war. The all-Japanese American combat team was the most highly decorated unit in the U.S. Army.

A Christian evangelist recently redefined the war on terror as a war between Islam and Christianity. Sadly, there are politicians and religious leaders who are often the first to point to differences in political and religious ideologies as the reason for the evil and violence we see in our world. The enemy is the “other” – the one who looks different; the one who speaks a different language; the who dresses differently; the one whose religious beliefs are different.

Our greatest enemy is not Islam. Political and religious leaders who would have us cower in fear do little to help relieve and resolve the suffering and pain that we see in our world. Our greatest enemy is our own fear and how the consequences of that fear can lead us away from God’s mercy, peace and justice to our own penchant for retribution, war and injustice.

That is evident in our reading from The Gospel According to John. Fear abounds.

John provides us with a detailed account of the encounter between Jesus and Pontius Pilate, the Roman governor of Judea from 26 to 36 CE. Pilate was known for his cruelty and oppression (Christian Century, November 11, 2015, page 21).

It is said that if you could choose your own judge, it would not be Pilate. Jesus did not have a choice.

A. Katherine Grieb, Professor of Biblical Interpretation & New Testament at Virginia Theological Seminary in Alexandria, Virginia points out that complex power dynamics existed between the Judean religious leaders and Pilate, who had the power to pronounce the death sentence. It was at the time of Passover, the annual celebration of Israel’s liberation from slavery in Egypt, that Jesus was arrested and put on trial.

Jesus’ encounter with Pilate could not have come at a more volatile time. Pilate was responsible for making certain that there were no riots or protests against the Romans. Extra military power was brought in to handle the large crowds of Passover pilgrims. Those making their way to Jerusalem were made aware of the presence of Roman legions and Pilate’s own intolerance of any kind of dissent.

John’s account of the trial was written at a time when there were those who believed that God’s Messiah had come in the person of Jesus of Nazareth. Others, especially the Judean religious leaders who were outside of the Praetorium or Pilate’s headquarters doubted that God’s Messiah would be someone who would die on a cross and so they did not see any signs of the Messiah present in Jesus.

What we have in John’s account is a tangled web of political and religious tension. On the one hand, Pilate the politician is on guard fearful of the disruption that could erupt at any moment out of the religious community. On the other hand, the religious leaders are on guard afraid that their power and authority will be undermined by Jesus.

Today is the last Sunday of the church year. It is a day we observe as the Reign of Christ or Christ the King Sunday. We are invited to consider the truth about Jesus and our response to that truth.

It was a truth that Pilate had to face. His first conversation with Jesus did not go as well as he had hoped. Pilate asked Jesus, “Are you the King of the Jews?”

As he frequently did, Jesus responded to the question with a question of his own. “Do you ask this on your own, or did others tell you about me?” (John 18:34)

Exasperated, Pilate replied, “I am not a Jew, am I? Your own nation and the chief priests have handed you over to me. What have you done?” (John 18:35)

Jesus does not answer Pilate’s question. Instead, he stated twice that his “kingdom is not from this world” (John 18:36).

Pilate only knew the world in which he lived and was unable to comprehend what Jesus was saying to him. “So,” he asked, “you are a king?” (John 18:37)

Jesus did little to ease Pilate’s growing frustration when he replied, “You say I am a king.” Outside of the Praetorium were religious leaders who wanted Jesus killed but lacked the power to do it themselves under Roman rule.

Inside Pilate insisted that the charges against Jesus be proved. By the trials end, he would succumb to his own fear and the fear of others to kill a man of whom he himself said, “I find no case against him” (John 18: 38).

Power appears in all manner of appearances and disguises in our world whether at the Praetoriums or at the Temples of our day. Our reading from John provides us with a contrast of power: between Pilate and the religious leaders who thought they had everything but in fact had nothing and Jesus who appeared to be nothing but in fact was everything (Seasons of the Spirit, Woodlake Publishing Inc., 2014, page 165).

“Pilate (represented) an empire whose foundation (was) might, whose reality (was) power, whose leader was a god. Jesus (offered) the vision of a different realm, one which (was) grounded in seeming powerlessness, whose leader (was) a servant. This (was) the truth to which Jesus (gave) testimony” (Ibid., page 164).

“Terror at the Mall” is an HBO documentary of the terrorist attack on the Westgate Shopping Mall in Nairbori, Kenya on September 21, 2014. The documentary aired on public television this week and included interviews with those who were at the mall that day.

Gunmen from a militant group in Somalia laid siege to the shopping mall, armed with AK 47s and grenades. At least 67 people were killed and 175 wounded. Among who were shot was a Dutch national who did research on vaccines. She was pregnant. The siege lasted for several hours. When it ended, she was among one of the first to be taken by ambulance to an area hospital.

She and her unborn child died on the way.

She was a Muslim.