“Giving Thanks for God’s Reign”


It is not clear if the Polynesian side of my maternal ancestors came from the Marquesas in the 6th or 7th century or if they came from Havaʻiki or Tahiti in the 11th century. What is clear is that the European side was among the 17,000 Portuguese who arrived from the Azores between 1878 and 1887. 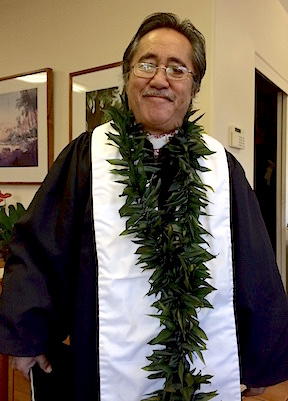 What is also clear is my paternal ancestors were among the more than 12,000 Japanese who immigrated to Hawaiʻi beginning in the 1890’s. Prior to their arrival 18,000 Chinese had already found their way to our shores to work on the sugar plantations.

In the years that followed the first 65 boatloads of Korean laborers arrived with almost 8,000 workers in 1903. Then between 1907 and 1931 the last large-scale arrival of 120,000 immigrants were recruited as plantation laborers from the Philippines.

Anthropologists tell us that the exact date when the Marquesans and Tahitians first set foot on our islands will never be known. But what we know is for at least a thousand years before the American colonies became a nation, they had become people of this land.

Hawaiʻi, like the U.S. in its infancy, was a nation of native peoples and immigrants. But unlike many other parts of U.S., then and now, we have learned to welcome the stranger.

We have learned to welcome the stranger because we have become a part of each other’s lives. Over the years, the sweeping changes in the economic, social, religious and political life of the Hawaiian nation meant that we have had to learn to live together and in living together we have literally become family to each other.

We go to school and play together. We work and worship together. We love and marry one another. We celebrate the birth of our nā keiki and mourn the passing of our nā kupuna.

On occasion we find ourselves at odds with others and with one another, struggling to find our way through the mess of simply being human. Yet despite the conflicts and challenges, we are reminded about what is essential if the reign of God is to become a reality in the world.

Our reading from The Gospel According to Matthew is not a parable but an apocalyptic vision of the last judgment – about what happens when our lives come to an end. These verses have no parallel in Mark or Luke, instead their kinship is with a vision in The Book of Revelation (Revelation 20:11-15) where those who have died find themselves standing before a throne and where each is judged. (Preaching Through the Christian Year, A, Craddock, Hayes, Holladay & Tucker, Trinity Press International, Harrisburg, Pennsylvania, 1992, page 519)

Our reading comes to us at the conclusion of Jesus’ public ministry and is intended as an instruction to the disciples and others about what is essential if we are to live a life of faith knowing that a time of judgment will come. The heart of the text comes from Jesus.

There is a growing awareness among the disciples Jesus is about to leave them. The disciples seek his reassurance: “Tell us, when will this be, and what will be the sign of your coming and of the end of the age?” (Matthew 24:3)

There are biblical scholars who remind us that Jesus’ coming is not to the earth, but to “the throne in heavenly glory. The scene is an enthronement, the Son of Man (sic) being installed as King and Judge. The coming has been dealt with already: it will be sudden as lighting (Matthew 24:27); it will be on clouds of glory and with great power (Matthew 24:45-51); it will be a time of reckoning and woe to the unprepared (Matthew 24:45-51).” (Op. cit.)

This is the full vision in glorious and cosmic dimensions. But it is also very personal in that we must all appear before God at the time of judgment and to give an account of our lives. The final judgment is based upon several elements. The first element is our response to human need (Matthew 25:35-36). The needs are not unusual. We know them well including what it means to welcome the stranger.

Our Hebrew ancestors knew about this need. “Abraham was a stranger among the Hittites at Hebron (Genesis 23:4) as were Moses in Midian (Exodus 2:22) and the Israelites in Egypt (Deuteronomy 23:7; Ruth 1:2). After the settlement in Canaan the term not only designated a temporary guest but also acquired the more specialized meaning of a resident alien who lived permanently with Israel.” (Harper’s Bible Dictionary, Paul Achtemeier, Harper & Row, Publishers, San Francisco, 1985, page 995)

“The Israelites were keenly aware of their own heritage as strangers without rights in a foreign land. As a result, they developed specific laws governing the treatment of strangers (Exodus 22:21; 23:9; Deuteronomy 10:19). Since the temporary guest was protected by the rather strict conventions of Near Eastern hospitality (Genesis 18:1-8; Hebrews 13:2), the laws more directly affected the resident alien who had no inherited political rights.” (Op. cit.)

“Strangers were to be treated with kindness and generosity (Leviticus 19:10, 33-34; 23:9, Deuteronomy 14:29). In later Judaism, the laws concerning strangers developed into the regulations governing the acceptance of Gentile proselytes into Judaism.” (Op. cit.)

Given the current debate over immigration laws in the U.S., we would do well as Christians to remember that all of our ancestors – native and immigrant – share a common humanity. The needs – of feeding the hungry, giving drink to the thirsty and clothing to those in need, visiting the sick and those in prison, and welcoming the stranger – is “in the ordinary coming and going” of our lives. (Op. cit.)

A second element of the final judgment is the surprise of those on the “right” and on the “left” that they have either served or failed to serve Christ (Matthew 25:37-39, 44). There is a hint of embarrassment by those who have responded to the needs of others while there is a an even greater sense of embarrassment by those who bypassed those in anguish. What would be a more faithful witness of the reign of God than attending to those in need?

Finally, there is the element of living a life of service to one another and others and in doing so we live a life of service to Christ. But a word of caution is in order. We would do well to avoid saying, “From now on, every time I see a person alone or in prison or hungry or thirsty (or a stranger), I will not see that person but I will see Christ.” (Op. cit.) The danger we face is that we will render that person nameless and faceless by “serving Christ” rather serving someone in need who is neither nameless or faceless. Each one, each person has a name and a face.

The Rev. John M. Buchanan is a pastor in the Presbyterian Church USA. For Buchanan, what is important about our reading this morning is that “God wants us – each of us. God is not a social engineer but a God of love who wants to save our souls, to use the language of the old revival meetings. God wants to save our souls and redeem us and give us the gift of life – true, deep, authentic human life.”

God wants to teach us – you and me – that “the fundamental lesson, the secret, the truth” (Op. cit.) of God’s reign is that to love is to live. Feed the hungry. Give drink to the thirsty. Visit those who are sick and in prison. Clothe those in need. Welcome the stranger. ‘Ae! Yes!